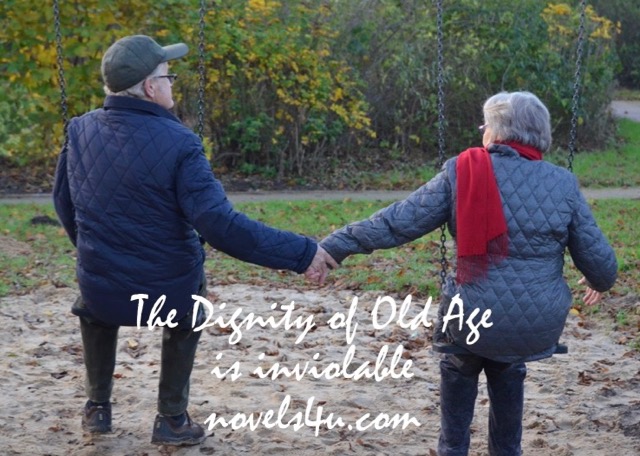 Of many things we have very specific images in mind. For example, When people think of the term „table“ as a rectangular plate with four feet, I’ve read it as if it were a meta-presentation under which all other table types are subsumed. Not necessarily a sensational news, if you are not in the situation necessarily want a three-legged table and the furniture retailer offers only four-legged. It is even more interesting if we extend this observation to terms that are not necessarily simply commodities. Thus, in most of us in the term „old people“ a picture appears, perhaps several, in our heads. So I think eg Grandmother stuffing her stockings, sitting by the fireplace in the cozy living room and telling stories to her grandchildren, or the smoking grandfather whistling. Both probably already a little antiquated, although I did not let them dust, because they are dear to me and worth.

But in reality, they no longer exist, just as there are no old people left or allowed to exist. Up to old age, it is important to stay agile and fit to live, ideally so that one does not even look at age. Yet there are still opinions that there are things that contradict the dignity of old age. But what is that supposed to be? Joggers beyond the 60 or 70 are no longer an extraordinary sight. Nevertheless, the mayor of a German city rejected the construction of a „senior playground“ (correctly he also called „installation of devices to support the mobility in public space“, but, let it go) on the grounds that this does not correspond to the dignity of the age. In a word, a person may not use a swing or a curling game after a certain age, as long as he does not have a child as an entry ticket. Thus, an old person has lost his dignity on a swing. So back to knit stocking and pipe?

Today, I caught myself thinking of such a thought. I was just stowing my shopping in the car, at the parking lot of a branch of an Austrian food chain, when the ground began to tremble. At least a three on the Richter scale, until I heard the associated bumming of the basses. „Aha,“ I thought, „Another teenage hooligan.“ And as if he could have read my mind, he let the engine roar. „He’s probably left over from the last GTI meeting, or he’s already practicing for the next one,“ I thought, looking around, having finally finished my stowage activity. In fact, it was even worse than I had imagined because this car was littered with a variety of paintings, patterns, and undifferentiated. „That will grow even more,“ I thought, „at the latest when the young driver gets into the real life.“ And there opened the car door. A guy wearing a fake leather jacket in the style of a motorcyclist, a canopy that was as bright as the exterior and interior of the car, and finally I saw the face, and I think I had my mouth open for a moment. Because that was not a youthful hooligan, but a man of at least 60 years. That was my table with two feet. I was, admittedly, extremely irritated, and probably outraged at first, because where is the dignity of age, please. And I began to long for the stockings knitting grandmother and the pipe smoking grandfather.

But do I want to knit socks that nobody will wear when I’m that old? Do I really have to force my husband to start smoking in his old age, just to keep up the picture? Or does the dignity of old age, and not just that, depend on other things? Perhaps it would be time to say goodbye to one or the other picture and to redefine dignity, including that of old age.

2 Gedanken zu “The Dignity of Old Age is inviolable”