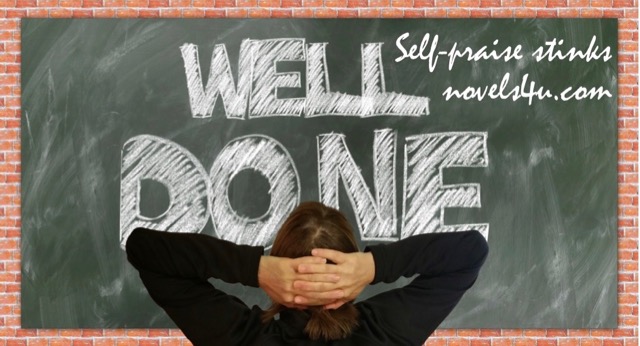 In that sense I would wish that we all smell a little worse. On the other hand, I have already met people, in which I thought, if self-praise really stinks, then those would have to be smelling to the Antarctic. Do not do it. Most, however, seem to be afraid of it, declaring their own performance – consistent and stringent – below true value. But where does it come from, this excessive self-esteem on the one hand and the urge to permanently overshadow oneself on the other?

It starts at school. The inclusion in the mediocrity, which is strongly supported by the prevailing system in our educational institutions. As soon as one deviates one is regarded askew. Either as an idiot, if you’re bad – but worthy of promotion – as a nerd, if you stand out – not worthy of promotion. A nice, pleasant mediocrity, so that the bad ones feel worse and worse, and the good ones pretend they are not. But eventually we can leave educational institutions behind and step out into real life.

The right life, what has to be done on a daily basis, no space is assigned to us – third row middle – and we cannot choose where we want to sit or not. We decide a lot ourselves – many things arise. There are no more grades, but other forms of sanctioning that we have to endure if we deviate. Thus, one can observe in Austria that there are always suspicious observers when trying something new or taking a different path than usual. Somewhere behind a bush they lurk for failure, then say they’ve always known it. But if the failure does not occur and even succeeds, then the nose is rumbled, as if it really stinks. Probably the successful has applied unfair means, because on their own, that cannot be imagined. This culture, in which it is forbidden to portray oneself well, in which one is required to put one’s light under the bushel, in this culture many talents and talents are lost, are cut down or simply hushed up.

It is probably about a healthy mediocrity, a path between narcissistic self-staging and self-flagellation in the sense of Agnus Dei. A way to find his own weaknesses – we know anyway – but above all to see your own strengths pragmatic, clear and sober, to gain a glimpse of what makes you good – and dare to talk about it, and indeed in a way that does not mean you have to apologize.

It’s about learning to accept praise, dismissing others and yourself and the reflex of playing it down immediately, with phrases like „Oh, that’s nothing special“ or „That’s what everyone else would have done just as well.“ There’s no reason either to blush if we wave softly.

Self-praise does not stink! – I tried it, then sniffed it, and there was no foul smell in the air. Just try it. By the way, it’s also good. Sure, you cannot buy confidence, but you can build it up.