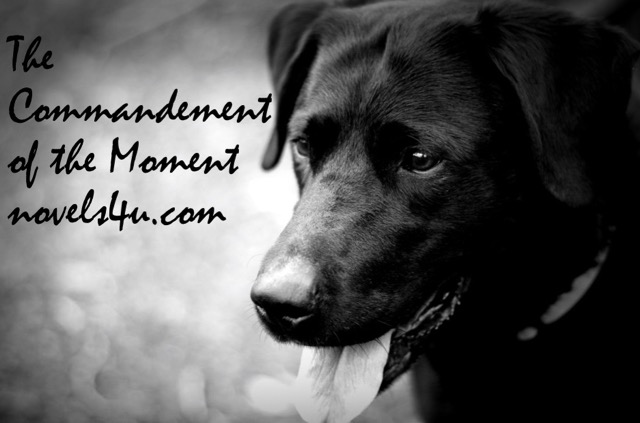 „You cannot!“ Many others would have said, many who I know and who would not call themselves bad people. On the contrary, they would consider themselves morally integrity. Eventually, they did not beat their partner, were not alcoholics, and did not rob any handbags. Morally intact people, in their understanding, who aligned their lives to what they were taught, told and exemplified. It had to be and must be right. And those would say, „You cannot, on your own event. Take care of your guests, not about any runaway dog! „

Nobody said that in this round, at this event. It could have happened anywhere and it happens everywhere, again and again. Only how the people who are in this moment behave, that is different. Few would follow the requirements of the present. Maybe they would like to, but they do not manage to eliminate these voices in themselves, that good behavior is more important than helping. And then, they say, I cannot do anything. If they can do something then just leave it. You always have an excuse. Not helping, not intervening, not being there. Even more, turning away, not seeing, not perceiving. And finally, they still say, „Everyone would have done so.“ Sure, everyone they know, because you surround yourself only with people who think the same and are ready to confirm that you have acted correctly, simply by you do not do anything. Finally, the others are responsible. Not me.

And then there are the people, the few who do not ask who is in charge, or who claim that the authorities or anyone else has to do something, but everyone, not just them, but to follow the commandment of the moment and just do it ,

It was such a person, one of the second kind she saw, the bitch that appeared alone beside the road, in the middle of the night. A bitch, well nourished, with a black, shiny coat and a silver collar. She had a home, but she was not there. Was she running away? Was she lost? It was feared that she ran into the street and was run over. So, everything was done to gain her trust. She was suspicious, almost scared. The delicacies presented to her were seductive. Again, and again she came closer to get something, but as soon as she reached out her hand tried to grab her collar to hang a leash, she backed away. With much patience succeeded. Once she had tethered the leash and taken her home, she was accessible, playful, and curious. She was still a puppy.

Then the authorities were notified. The police came and said she had to go to the shelter overnight. It was hard to reach someone in the shelter even though there was a night shift there. „Keep the bitch until tomorrow. Then we’ll see,“ said an unwilling lady. You could not wait until tomorrow. This bitch had to go home. It’s so tiresome to have to talk about such matters of course. It has to happen now, right now, not at some point. In the end, she had no choice. Fortunately, the bitch was chipped, so that the owner could be quickly located and the four-legged friend could be brought home.

It was good that she was back where she belonged, well, that she was no longer wandering alone in the street, exposed to all the dangers involved. And yet, the one who did it was an exception, because like many others just look away. Because it’s none of their business. Because the others should take care of each other. Because they have no direct mandate for that, and have enough of their own problems, they can do nothing, they say, sitting in front of the TV with beer or prosecco. No, of course you cannot do anything.

But there are those who do not ask, do not argue, do not talk, then just sit and do nothing, so they can say afterwards that they could not have done anything anyway. Of course, we can. This time it was a bitch, the next time a frightened little girl who was obviously beaten or a woman who was raped. It is important to do, now and here, to follow the commandment of the moment.