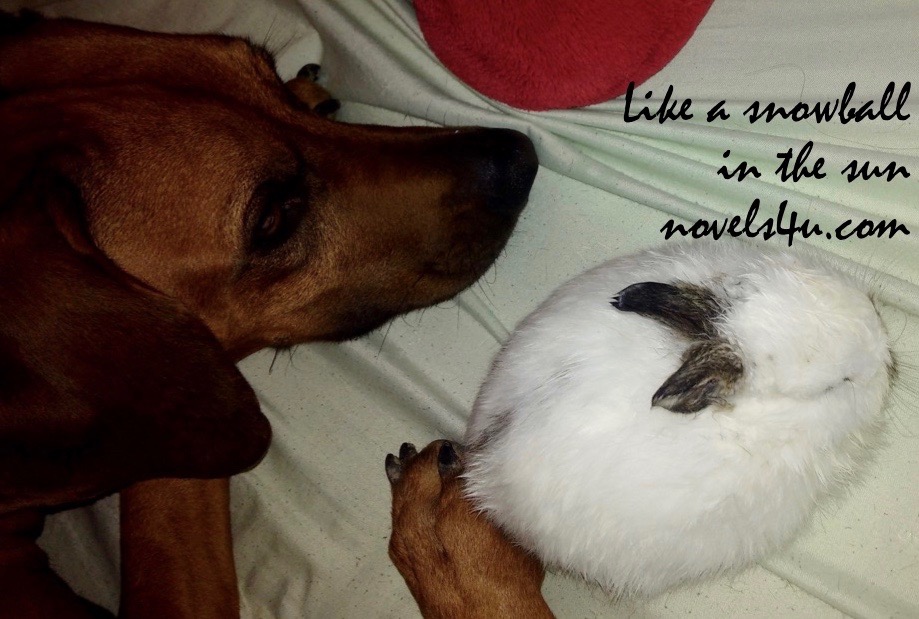 It was early morning when we found her, a small, white ball of wool with short, speckled ears that sat in the grass and did not run away. A rabbit. But why did not she run away? Why did not she even try to run away? After rabbit type. Carefully we picked her up. She lived. Clearly, but the nose was blood red and his backside were smeared with feces. To do something? Let her die? Wait until the fox comes or a bird of prey? It would be the natural course of the world. A sick rabbit that sits and does not run away is eaten. Staple food for various robbers. That’s why they throw, proverbially. Many babies guarantee the survival of the species. Just like the mice. A staple food. And yet, I could not let her sit, given over to death.

I gently picked her up and took her to the veterinary clinic. The baby had diarrhea and a hematoma on the nose. Someone must have added badly to the little one. She weighed just 225 grams. As much as a roll. She got a box. Feed. Medications. She hopped around. A little tentative though, but at least. It seemed to go up, but I still had the vet’s words in my ear. It could be that she does not make it. Rabbits are very susceptible to everything. That’s why there are so many. Because so many are dying. Often without external influence. She ate. Little. But at least. A glimmer of hope on the horizon. We thought of a rabbit hutch and a rabbit friend for the little one. Snowball was called her because she looked like a little snowball. Everything seemed to be going well. It was time to familiarize the other residents with her presence, with two adult lion dogs, two Ridgebacks.

The male, Mr. in the house, felt disturbed by the small fur ball. With her barely three or four weeks, the little one probably still remembered a puppy too much, and what a decent male is, he does not give up with the little ones. Quite different the girl. Just three years old, she immediately began to lick the fur and take care of her. If there was a risk that she might tumble off the mattress, she gently pushed back the little snowball and lay down next to her. Just 225 grams the little and 36 kg the dog, and yet she knew how to behave so that there was no danger for Snowball. Recently they lay side by side, but the dog remained attentive. As soon as the little girl moved, she watched, ears pricked. Then we brought her back together into the box. We had to return three times because Juna, my dog, had heard something. Check again. Was everything alright with her baby? It seemed like she had adopted the little one. She would pay attention to her. Later, if we let her run in the garden when she was hanging around. She would be fast enough to prevent Snowball from leaving the garden. Later, in the summer, when she would have been well again.

This morning, our first path led to the box. With open eyes Snowball lay in it, motionless. Carefully, I took it out. She was still warm, but she did not move. She would never move again. As it had been prophesied, it had happened. Staple food in nature. Susceptible and sluggish. And it reminded me how close death is to life. Every moment. It was just a rabbit, but I was still glad that we had taken her and given her those two days. Maybe it’s unfair, because a fox has to stay hungry. Or a hawk. If human intervenes in nature, then it is always missed. When the human interrupts this cycle, there are always victims. That’s how we do it, day after day, and the consequences are devastating. Even if it’s just a little rabbit. And yet, I cannot help it.