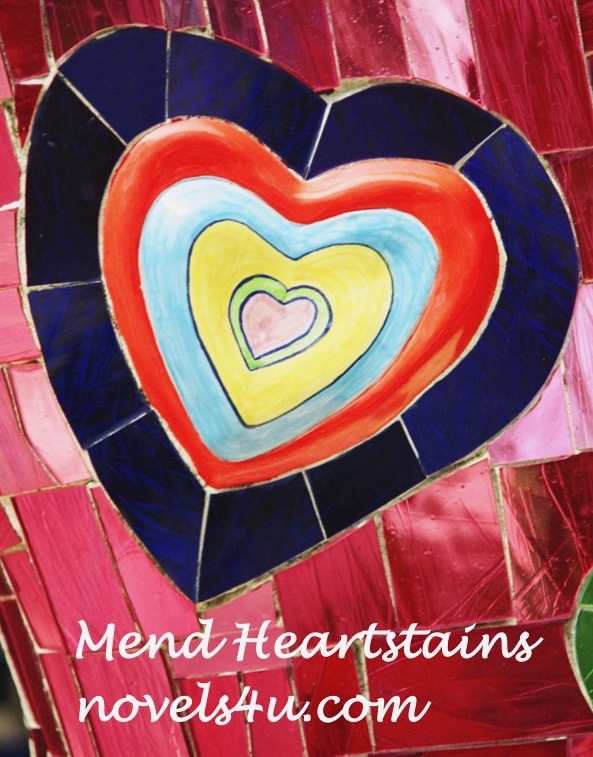 And my heart flew, with the winds of the north, the south, the west, and the east, and felt the suffering wherever and in whatever form it was found. It would be lost, splintering into billions of parts, I thought, in the face of the suffering that was in billions. 144,000,000,000 sufferers. How is a heart to endure? How should it stay healthy and not break down into the smallest micro parts? But it came back, full of patches. Every pain, had burned itself. A scar for the suffering. A patch to connect. Heart patches mend heart stains. It had been wounded, every time. It had been doctored, every time, because it was love that made it visible and touchable and healed. What should a love that makes only touchable, but does not heal? What should a love that only cries and does not comfort? What should a love that only moans and does not demand? But it was not finished yet, so I took out again and threw it into the waters of the sea.

„May you swim with the waves, the waves of the north, the south, the west and the east,“ I thought after it and saw how it was caught by a wave and dived through the water, into all corners, into all depths and caves, in all latitudes and longitudes, „Float and look at these seas, heart!“ That was my mission and my burden. It would drown, get lost and not come back. Maybe someone could use it. „

And my heart swam, with the waves of the North, the South, the West and the East, and felt the lifelessness, on the abyss, in the deepest depths, a mass grave of civilization. Plastic are the corpses and in between the emptiness. The salt burned in the fresh wounds, beaten, never completely healed. Beaten and connected, branded and anointed. It is always new and always different. But it came back to me. No trace of fragmentation or dissolution. It had grown. Patch layer on patch layer. It did not fit in my chest, also because it did not want to go there anymore. It was not the right place. Not anymore, after all that it had seen and experienced, since I let it see and experience and did not lock up, for fear that I might lose it. In the chest, not even in the middle of the body, more in the upper third. At the top the head. Which sets the direction. It says where to go. Sober, controlled and logical. Should that be the rule I wanted? At the bottom, the feet that carry me. Messenger, slavery services. And somewhere in between the heart, somewhere between domination and slave. Well, there were the hands, the arms, the energetic, about the same height. Heart with energy. But what should it be, drive without an overview? Was not that blind actionism, even when filled with empathy? But above all, did I want to leave the head alone to rule over my life, my actions, my walks, my loves? Should the pure, cold rationality take over the supervision, give deeds and direct and monitor? Cool, calculating, calculating mind power in the face of life? Now that my heart had seen all the suffering and it told me, one after the other and I could not stop crying. Tears that flowed as long as there were. Until they dried up. They should never have died. Because suffering never stops. No way. No way. No way. But you do not see with tear-wet eyes. They blind you. Therefore, it is also good when they dry up, also in the face of suffering, or especially in the face of suffering, because there is no face when the eyes cannot do their duty. And they too are controlled by the head in which they sit. But where would my heart have its place, if not in my chest, where it had struck before, if not there, where then? There had to be found a place that could be reconciled, even with the love that does not reign, in the face of the empathy that withers when the head controls it, but where could the place be, as the reign balances and is neither cold nor overheated? Was there such a place in a system of domination, superiority and subordination? And so my heart lay before me, with all the billions of patches and I did not know where to go with it.