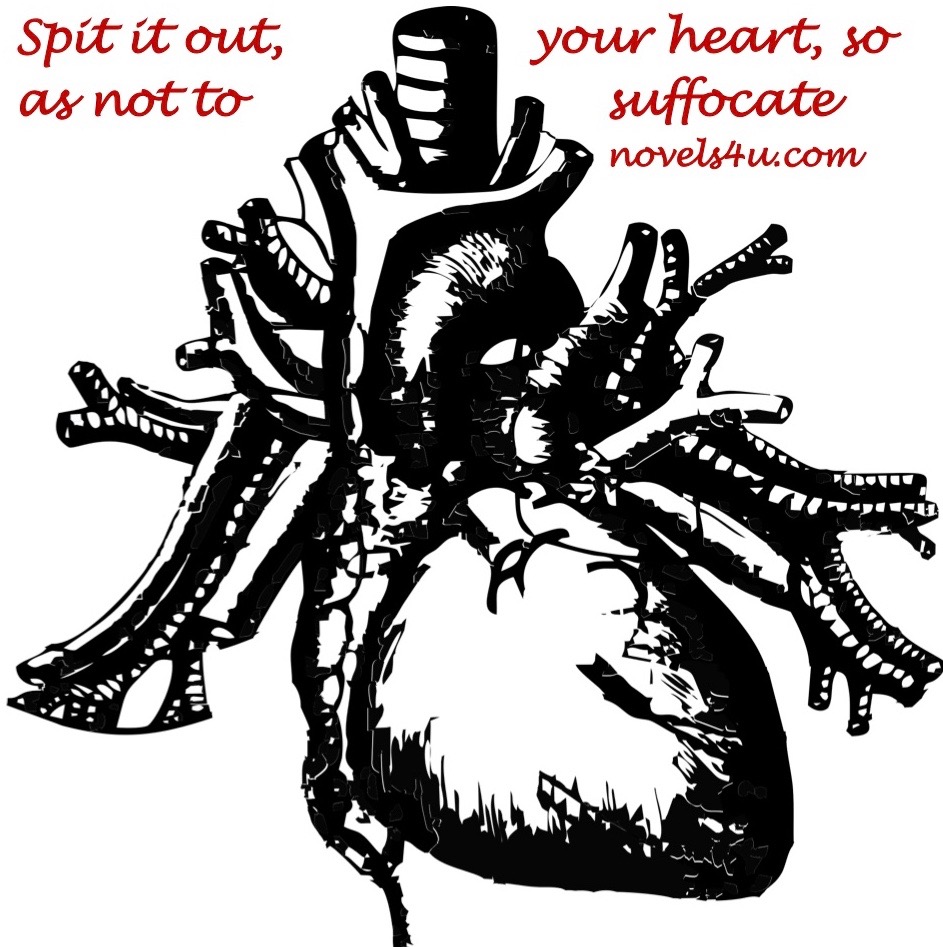 „Breathe, breathe, damn breathe,“ I thought doggedly. Something stuck in my trachea and did not want to go away, something made of elastic material. It was pulsing. I gasped. Only a few moments remained, then my senses would disappear and I would suffocate. It did not move a centimeter, the thing in my throat. With the power of sheer despair, I wrapped my fingers together so that my hands made a compact impact weapon and slapped my sternum so that the elastic, pulsating something was thrown out of my throat. How good it is to breathe air. Greedy, I sucked it into me. Calm entered. Then I looked at the something I had spat on the ground before it could kill me. It was not hard to see and it took my breath away, that was not really something new. It was my heart.

My heart, which now lay on the ground in front of me, instead of beating in my chest. How long could you live without a heart? Some probably all their lives, I thought automatically, as heartless as they acted. But that could also be meant metaphorically. Anyway, I lifted my heart from the floor. It was a bit dusty, even though I thought I had used it so far. But can one use his heart sufficiently? Can you ever be enough hearty, or too much? Or sweet? Just as cute and cute and a little too small at all, even in his emotional-pragmatic attention. One without the other is stale. Pragmatics without emotion is technology. Emotionality without pragmatics is aimlessness. To go into the abyss together is at least a togetherness. To freeze to each other is at least one together. But my heart was as used or unused as I allowed or the others. When I retreated childishly offended, snorted and annoyed, my heartfelt affirmation finding no response, no answer. But now the heart was in my hand. Pulsating. I lived. It at least felt like it because it just did not feel different than usual, and assuming I had lived until now, and it was no different than usual, I would have to live now too. I left it as a working hypothesis in the room. It was not important either, because a condition is just a condition and I had to take care of my heart. I wanted to get it back to where it had come from before it almost shut my throat.

„Woman choking on her own heart!“, would surely have made a good headline, but that’s not a good reason to die for. Too short a glory. But now it was out, and should go back, if only from the practical consideration that I could not leave it then somewhere, as it was my usual way. And if someone else pocketed it. One heart looked like the other. There were so many heart thieves. And if he was one of those breakers then. Heartbreaker. Unthinkable. I took it and tried to stuff it back into my throat with all the force I could muster. But it did not work. It was as if the flaps were opening and locking the arteries, like spikes. So, I put it on a plate and cut it apart bit by bit, ate it up to fish it out of the toilet the next morning, as a whole. After I cleaned it and dried it, I looked at it again exactly. It still looked the same as the day before, except that you could see exactly where I cut it, where I had bitten it. Traces of incorporation, but otherwise it was safe. And when it did not want to go inside me, I took it far and threw it in the air.

„May you fly with the winds, the winds of the north, the south, the west, and the east,“ I thought after it, and saw how it was caught by a gust of wind and flew over the earth, into all corners, into all heights and depths, in all latitudes and longitudes, „fly and look at this world, heart!“ That was my mission and my burden. It would be stranded, lost and not coming back. Maybe somebody could need it.