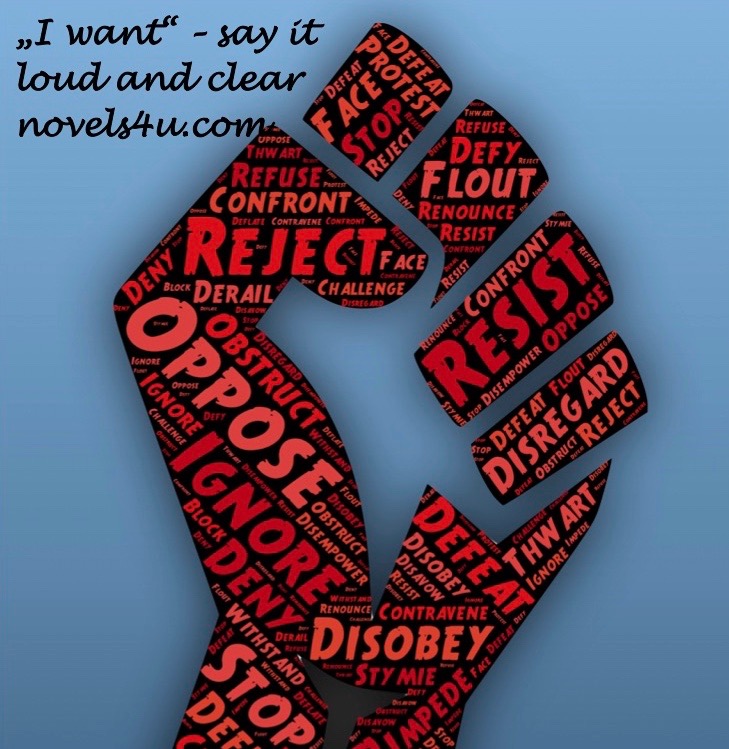 I was used to it, and as I heard, not just me, indirectly saying what I want. It is not proper, especially for girls, to express directly what they want. That’s why you clique. After all, you do not want to put anybody under pressure with your wishes. So, you hide and assume that the other understands what you mean.
So I said
„It would be nice …“
„I’d wish …“
„It would be my pleasure …“
„I would like to have …“
and similar. You heard it, and not even looked away from the TV. Could, would, should, would have, that’s a possibility. No more. That is not meant seriously. You can safely ignore that. It does not help.
„Women want to vote, please,“ said the suffragettes.
„We want our freedom,“ said the slaves.
„We want better working conditions,“ said the workers.
Want, wish, you can already. Maybe it was acknowledged – and shelved.

Nothing happened and could not. You do not have to take it seriously. It’s not serious. It does not disturb the peace. It is something that floats in space and is there. Like a fluff. Maybe you will sell it. But it was meant seriously. Damn serious. To be polite and reserved is perhaps the educational ideal. Do not take one further.

So I asked myself, what did I do wrong. And the suffragettes. And the slaves. And the workers. I am not taken seriously. I’m a human like you, just doing what he wants. Just like the men in the government who deny political participation. Just like the owners of the slaves, who want to keep everything as it is and do not realize that all people have the same right to freedom and a self-determined life. Like employers who are not interested in better working conditions. At first, I am sad because as a human being I am not taken seriously in my needs, because I am ignored and put backwards. Sadness is followed by anger, an all-encompassing anger. I want to beat myself, make me aware, not stand back, behind anything. But I stay in my corner because I do not know what to do, how to express it. Slowly I get up. I become aware of myself by making myself tall, taking up space and knowing that I am there and have a right to this space, just like you.

„I …,“ I hear myself say. You hear me say it. Confused at first. A simple little word with three letters, and it sounds like a battle announcement. But I do not stop because it sounds right. This I in the beginning, which actually does not belong.
„I want …“. there it is, the real thing.
„I want to be able to say what I want, no, I’ll say it, I’ll say it.“
„I want you to take me seriously.“
„I want you to hear me.“
„I do not want to be quiet anymore and talk in a clumsy way, but loud and clear, say what I want.“
„I want …“, and for the first time you look up and at me. Startled, maybe intimidated.
„You could have said that right away,“ you said. I have always said so. I realize that I am suddenly taken seriously. And the suffragettes have noticed it. And the slaves have noticed it. And the workers have noticed it.
„You just had to say it. You do not have to be so aggressive after all,“ the tenor, after the right to vote was there, was also for women, after the slaves were freed, after the workers had won their rights.
„Nobody took us seriously,“ was the simple answer.

Dear and nice and good, that is welcome, but will not get you anywhere.
„I want …“, say it if it really matters to you and say it loud and clear. If necessary, yell it into the world and do not let it irritate you that others say it’s not necessary to be aggressive. If they attack you and insult you. No one wants a change, especially those who have set the world that way. If you want something, you have to demand it. But if you do not, if you always allow yourself to be sent back to your corner, then you may be able to dream of change, but it will not fly you.

And they will fight you, lock you up, incapacitate you, but as long as you say, „I want …“ they did not silence you. You are the sting in the flesh. You are the eternal blemish. And it is the moment when you begin to change the world.