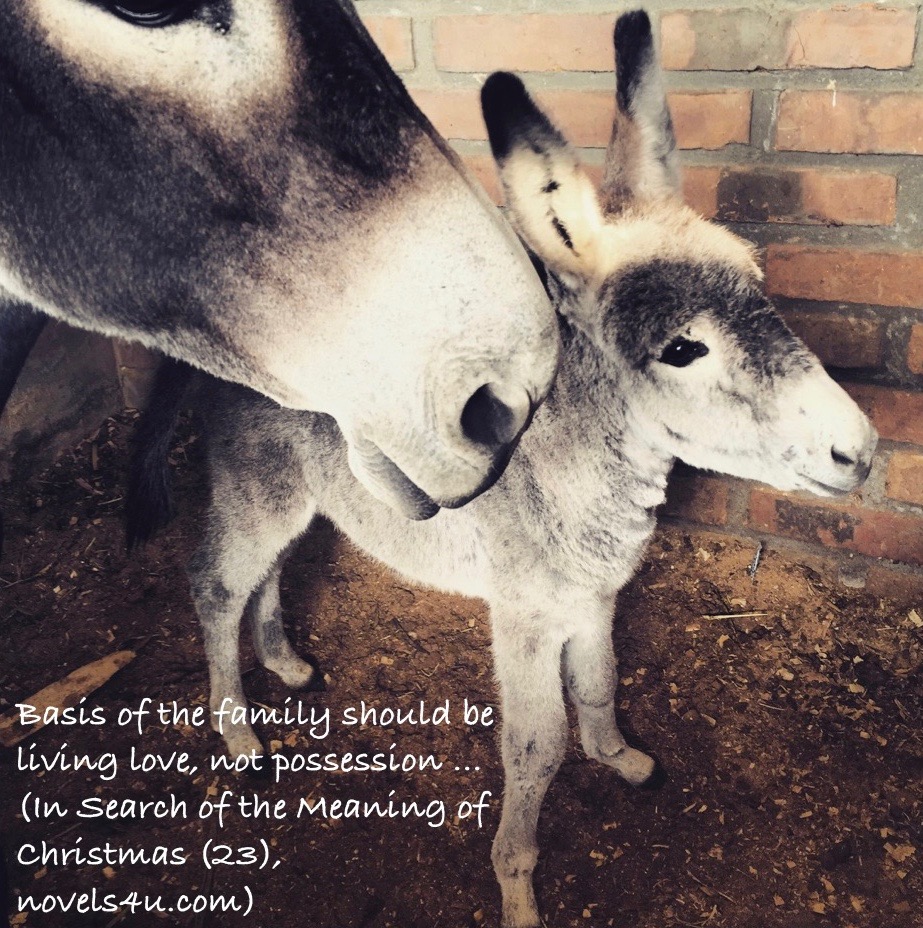 I had wandered all morning, but this time I enjoyed neither the landscape nor the sunshine. It was more like an escape, but I was always in a circle. Restless, almost driven, I felt. As if all the courage and confidence I had just had left me forever. Not even the stormy greeting of the dogs on my return could calm me, let alone distract me.

„Tomorrow is Christmas,“ I explained, pacing up and down in the little house with my tea in my hand, sitting down again and again, but being distended again, of that one thought that did not make me calm, „Tomorrow Christmas.“
„We know that,“ Jesus said gently, „What exactly do you want to tell us?“
„Now we’ve been discussing the meaning of Christmas for 23 days,“ I began to explain.
„More about the nonsense that goes along with it,“ Mary said with a smile, „and that’s quite a lot.“
„Yeah, and it all felt so far away, like the day would never come and it would not have to turn out,“ I continued, „For having one realization is one thing, another putting it into action, bringing it to life to let go, and that makes me restless. Throughout that time, it was as if it was none of my business, to a degree, but this morning, I realized that tomorrow would be the day when all the theoretical considerations need to be measured against reality. And then what? What will be?“
„What will be, we will know tomorrow,“ Jesus said calmly, as it probably was his way, „It is up to you what you make of this realization, if and how you implement it and fill it with life.“
„No, it’s not just me,“ I explained with conviction.
„It’s up to you with all the things you do,“ Mary replied, „In everything you do, it shows whether it’s guided by the message and meaning of Christmas or not.“
„And you must not underestimate the influence of the role model effect,“ added Jesus. „Maybe you have the impression that nothing changes and nothing goes on, but you never know what people are living from what you say, but above all, take. Also, in their Christmas.“
„But everything is so incredibly slow,“ I interjected. „And tomorrow is Christmas already. Every year is Christmas, for a long, long time, and it is celebrated just to return to the agenda the next day, as if it had never happened, or just as an annoying obligation that you just bargain. It seems to mean absolutely nothing, even though you invest so much time and energy, but again only in externals. But I think, if you already celebrate Christmas, when you are so eager to do it, then it should resonate, at least in a beautiful memory that sweetens your everyday life, if you are not ready, that the original saying of the meaning of Christmas that unfolds message in life and gives it a direction.“
„Then show the direction in which what you do and say and live, is not the signpost, but the way, and the people around you will see that it is a viable way,“ Jesus encouraged me.
„To show is a good thing to live up to, but what if there’s no one looking, what if it’s simply taken note of, and that’s because it’s because of well-established traditions, the hitherto, the familiar and the familiar do not want to diverge because it’s that easy. Whether it’s good or bad, it’s easy,“ I went on lamenting, not realizing that I was heading straight for the path I did not want to go.
„Do you notice that you’re doing exactly what you think is destructive?“ Mary asked, „That you’re well on your way to leaving the vivacity and transforming it into miserable self-pity. Ultimately, it is about just about the liveliness and the love, to let everyone find the way that leads him to his personal happiness. Without specification. Without a finished solution. Just let yourself be. There is no patent solution. This expresses the individuality. Happiness is not a product. It is alive and always in the process of becoming.“
„I also do not want everyone to be like me,“ I replied, „I do not want to pretend to have the absolute solution, but there are certain basic constituents that must be given to make this a path to happiness living loves, to the loving liveliness can be gone at all.“
„And who would be?“, asked Maria.

„Do not cause suffering that is not necessary. Beyond the inevitable, such as illness or death, death appropriate to life,“ I replied.
„Seen in this way, the death that the so-called livestock suffer a life, their life, adequate, mistreatment from beginning to end, one wants to be cynical,“ Jesus interjected.
„If you want, but I just do not want to,“ I replied, „no suffering and no pain. To respect life in all its fullness and uniqueness. So, you do not have to stand up for its preservation, because we do everything we can not endanger or limit it, because we live it, all of us, all our own, little life. Everyone in concert with the other, whom I see neither as a threat nor as a competitor, but as a life that is just as entitled to it as I am. Saying goodbye to greed, and finally seeing how rich I am. A swing from having to being. To stop degrading other beings to things, but to see them as one you can meet alive-loving. These are the basic prerequisites that I can happily find, because as long as I burden myself with anger and anger and greed, I am cramped and blind, even for my own needs. Unburdened and unbiased it should be. “
„That sounds very balanced and reasonable,“ Mary remarked, „but man is, as we have stated several times, neither balanced nor reasonable, but rather driven and unreasonable. Many do not think outside the box or beyond the moment. And yet it is legitimate to keep hope. At some point the day will come when on Christmas Eve no corpse will be at the table, that there is no need to kill each other’s life, as happens in families, that being together matters more than the packing under the tree, that we each other loving and forgetting everything that was before. “
„Seeing the baby in the manger as the opportunity to start over, to see that it is not too late to do anything different than it has been done so far,“ added Jesus, „The chance to realize the meaning of Christmas and the Translation of the message into life. It may be.“

I had sat down to the puppy on the floor. Also, to Hope, who watched in peace as the little ones, one by one, climbed on my lap and fell asleep, snuggled close to each other. Then she closed her eyes as well. It was good as it was. I still thought it was what it was supposed to be, lived and brought to life by our fellow creatures who had not heard of a message or of Christmas, but just made it as it should. Only human needed this crutch of a message because he could not do it easily. And as I pensively caressed the puppies on my lap, gently, so that I did not wake them, but still felt the warmth on my fingers, the warmth and soft fur, my eyes slid to the window. Big, thick snowflakes swayed in the air and slowly fell to the ground. A hill had already formed on the windowsill. Then I remembered that I still had my tea. Carefully, I turned to the side, bent over the upper body and stretched my arm as far as I could, so I leaned forward. The fingertips were already at the cup, but I had overlooked the edge of the table, I was so focused on grabbing the cup, and this edge of the table clashed roughly with my head. Luckily, I had not covered the cup yet, because otherwise I would have swept it off the table when I fainted. And suddenly everything was calm and peaceful. As if by itself.

3 Gedanken zu “In Search of the Meaning of Christmas (23): Every day of the year”