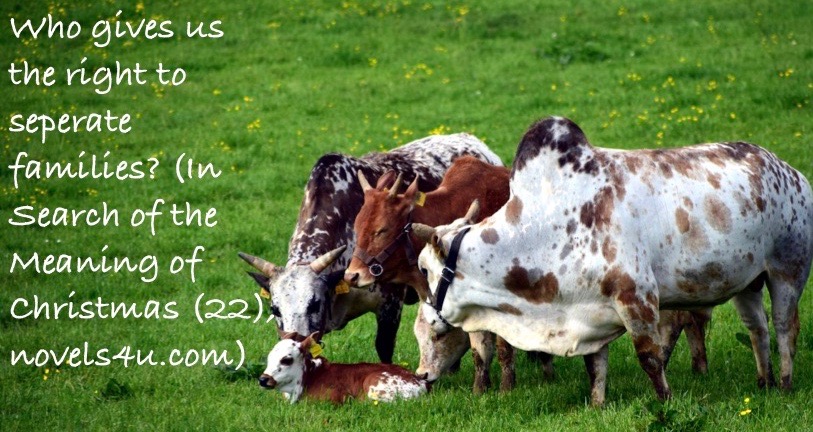 When I woke up this morning from quite calm dreams, which I still had in spite of everything, this did not happen quite voluntarily. There had been a sound in those dreams cheated, which I diagnosed immediately and razor-sharp as one that had nothing to do with my dream. Consequently, I concluded that it had to come from the other area, that of being awake. A strange sound, like a gentle moaning, gentle but lasting. I fell asleep, looking around. In the room I found everything unchanged. Finally, I turned my gaze to the ground to finally find the source.
„Joy, you little rascal,“ I said to the daredevil, „How did you come here?“ Apparently he had set out on an expedition and landed with me, but found now not back.

„Come on,“ I said as I picked him up without much fanfare and went back to his family, „Let’s take a look at the others.“ Carefully, I placed him next to his siblings, who were already busy drinking. Quickly he had also found his place and sucked vigorously at the nipple, giving smacking noises of him.
„What an idyll!“, I thought, „What a simple, small idyll, in the midst of chaos, they would find their place, the main thing, they are together and can be there for each other. Everything else does not matter. “
„A beautiful family,“ I heard a voice behind me that I identified as Mary’s.
„Yes, that’s how it should be,“ I replied, without averting my eyes. „Like the family outside in the stable. All they wanted was a place to be. Even the triviality of a birth needed a quiet place, if it were found, even if it is possible in principle to bring a child into the world at any place. Often this does not take long to ask. But in the peace and seclusion it is better. And then of course something, where you could put the newborn, even if it could basically sleep on the mother. Everything is possible, but such a place, a small one, for yourself, that is probably not an absolutely presumptuous desire.“
„Probably not surveying, but even that is not granted to many families, not even that,“ Mary replied, „refugee families housed in large-scale barracks, if at all, unless left outside, without any protection.”
„If you let them be together,“ I said, „If you do not kidnap the children and bring them away, who knows where. Separate families. Also, for economic needs. Every day, it happens that parents leave their children behind to go somewhere else because there is no work and no survival in their homeland. The old and the children are left behind. There are now whole villages where there are only older people and children. At least they are not alone. After all. Still, a family is not anymore. The parents somewhere and the kids actually on their own. The losers of our global mass exploitation.“
„And all the other fellow creatures we are constantly tearing families apart from, no matter how small, it’s a family that we hold so high as the seed of society and stuff,“ Jesus intervened, who probably also found his way out of bed, „calves are separated from the cows, chicks from the hens, piglets from the mother pigs. And they cannot fight back. They are just desperate, as it would be any mother who takes their children away, over and over again, during their oh-so-short lives.“
„We destroy families because we take away from them what is meant for these children, if only the warmth and security of a mother,“ said Mary.
„Why?“ I asked, „Is not that what gives us confidence in life, but these babies do not really need faith in life because they’ll never have one. Many of them are disposed of immediately, some later, but eventually all will, in some way.“

„And while that happens, the family, like the conservative bourgeois middle class, is defending itself with teeth and claws,“ added Jesus, „The family as it is, these are the father and mother and the children. Everything else is against nature. As we learn. It is against God’s will. How they interpret it. And that kind of family is declared sacred, sacrosanct. Because it was the same with my family.“
„A haven of love and security, it should be,“ I reasoned, „and yet there is nowhere as much violence as in the oh so great bourgeois nuclear family. How does that fit together?“
„That’s easy,“ Jesus explained. „On the one hand, it’s the pressure of expectation that weighs on it. People are watching each other, especially in rural areas. There are certain ideas about this family. Diligence and obedience. Amongst other things. Especially from the children. They must correspond to the picture. If it goes after the creators of this family picture, then the man still has to go to work and the woman takes over the homework. Dependence is the goal. The woman cannot easily free herself. The financial independence of the woman is therefore devil’s stuff, because the man can no longer take any right. He used to beat, rape and detain her. Because she had no choice. But if she has the choice, then she does not like it anymore. Then she grabs the kids and leaves. Thus, this emancipatory turn is to blame for the decay of the family. Not that one would say the Lords of Creation treat your women properly, no, do not let them have the choice. Beat and rape is fine, at least within the family. Then the door is closed and nobody knows. Sexual assaults on the children. That too is fine as long as there is silence about it, because the children, the woman are the property, and with property you can finally do what you want. Only nobody is allowed to know. So that not only the worst crimes within the family association happen, but it is permanently lied about. Everything is fine as long as the facade of integrity is maintained. Discouraging is not the act, but the blabbering. It could hurt the reputation. Or the career. Therefore, one would like to spread the cloak of silence above it. Nobody cares what happens inside the family, and if somebody steps out and does it, then he is not seen as a victim, but insulted as a nefarious person. “
„So, the family is either destroyed where it works, whatever it is,“ I summarized, „or it destroys itself, even at Christmas.“
„At Christmas, just like any other day of the year,“ Maria said correctly, „why should there be an exception?“
„Because it’s Christmas, and because at the heart of the Christmas message is a family that’s also an immigrant family. The topic could not be more up-to-date at the moment,“ I commented, „strangers looking for accommodation, nothing more. Rejected, sent away, chased away. Just like today, even at Christmas, as on any other day of the year.“

And the closer Christmas Eve came, the bigger my doubts became. If I had felt a slight discomfort at the beginning of these conversations, there was almost nothing left to hold on to except one point, the two rose bushes, life and love, love and life. There was nothing more. Remained the question, on this 22nd day of Advent, there had to be more? Should I actually be content at this point, actually giving up? Would not everything has been in vain? Was not it an admission, a concession that love could not exist without a desire for possession, without control and appropriation, that it was as it was, or at least engineered? Not even the institutions to which I had the greatest hope held up a stern view. What else was left to do, what to believe in? Or was it simply because these fundamentally good structures were disavowed and misused and we just had to find the strength to rediscover and live the real inner truthfulness?
„No!“, I said loud and clear to myself, „It had to be different. People who lived the love in their liveliness also in the coexistence. Somewhere.“ And this thought gave me confidence, anew, because everything that is conceivable, is also feasible and thus alive. At Christmas and every other day.