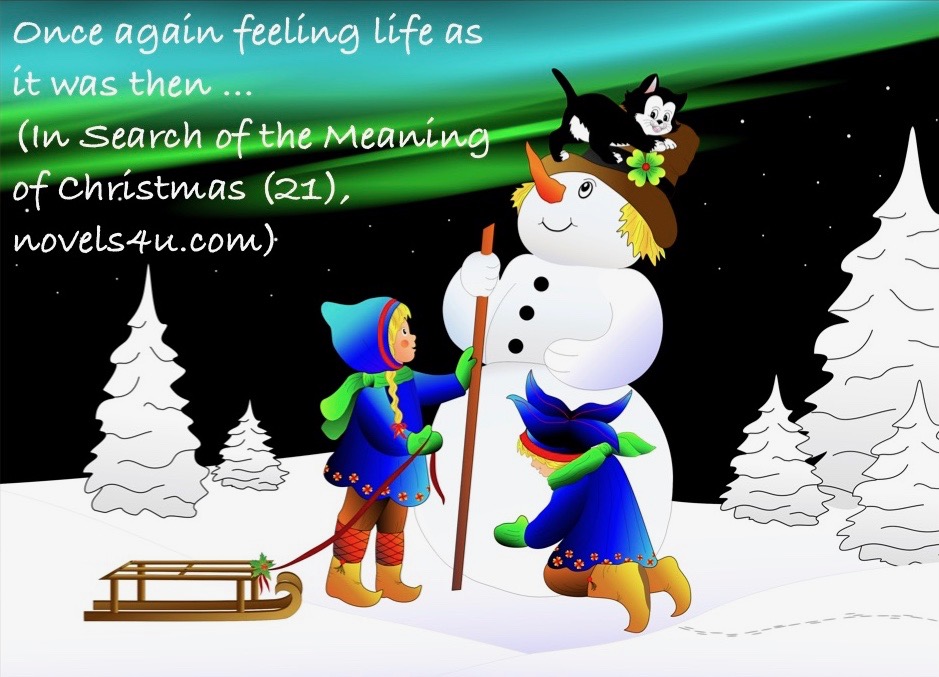 „You’ve made a great meal, Mary!“ I said, still tasting the enjoyment as I stood in the kitchen doing the dishes with Jesus.
„Yes, really,“ Jesus affirmed, adding with a wink, „Have you ever noticed that there is always too little cooking of goodies?“
„Sure, you’ve dusted most of the good food,“ Mary remarked amused, „but it’s also incredibly hard to get enough.“
„Like my son,“ I thought involuntarily as I took the last cup out of the sink and handed it on to Jesus for drying. My eyes wandered away and to the window. Outside lay the snow, like a soft blanket that seemed to envelop the land altogether. There I was suddenly back in my kitchen, in that home that only became the way I shared it with the most important people in my life.

„Mama, Mama, Mama“, an impatient voice came from behind me, „Can we finally leave now?“ So that I turned around, automatically went to my knees to meet the little man at eye level.
„I promised you, and I think so too,“ I said, hoping he could wait a little longer.
„But you already say that all the time. Can we please leave now?“, he persisted. Also, the one property that distinguished him.
„But I said also,“ I replied, „that I have what must be a little bit make up in the kitchen, but when I’m done, then we go right.“ Again, and again I consoled her, again and again I had to put off as I said. Did I really have to? Could not I have done that later? And when he turned away, it gave me a stab in the heart, more than if he had insisted further. How many times have I disappointed them, my children? How many times would I still disappoint them because something else was supposed to be more important because it was inevitable and urgent? How much of that was it? But I thought it had to be that way because it had to be that way. I watched him for a moment. He seemed a little indecisive about what to do while he waited. That’s where the idea finally came to me.
„What if, in the meantime, you see if everything is there, hoods and gloves and what else we need,“ I tried to bridge the time. He turned to me beaming with joy. He understood immediately, and I gave them responsibility for the success of our company. Although he probably would not have expressed it that way at the age of five, but he knew what I told them, that was important.
„Oh yes, we do,“ he explained, calling his sister. Then I heard her work in the anteroom, deliberate and eagerly search. A few minutes later, just as I was hanging up the tea towel after work, they both came running into the kitchen.
„It’s all there, Mom,“ my daughter explained. She was visibly proud of her achievement.

„Well, let’s get dressed, then,“ I replied as I grabbed the backpack with the thermos and her favorite biscuits to go with them to the anteroom, where in fact, neatly arranged, three pairs of gloves, three hoods, salopettes and jackets and I could not help but notice, „That did you really great.“ In no time we slipped into the robe and stepped out into the bright sunshine, but nothing changed that a freezing cold prevailed. We grabbed the plates to slide and went to the sled hill.
„May I come with you?“, it sounded from a garden, where we passed. It was a kindergarten boy and my son’s best friend.
„If your mom agrees, sure,“ I answered. And after some back-and-forth and at least ten assurances that on the one hand we would take care and on the other hand he would not be a burden to us, we trudged on. By the time we got to the toboggan hill, I had six children with me. It was nice, because it would make everyone more fun. Why I was apparently the only one who had time to go to the sled hill, I did not think about it at the time. Also, because I did not have time. Finally, I had to supervise the little rascals. There’s nothing easier than keeping children under the watchful eye than having fun, and they did. With sledding and snowball fight and snowman building and everything else that makes the snow so beautiful, we spent the time until dawn. In between, the tea was divided and also the biscuits. I was surrounded by happy children. Her cheeks glowed with excitement and joy. It was too soon that we had to start our way home again. The time had passed by in flight. We talked for a long time about this afternoon. Exhausted but happy, my children went to bed that evening. And not only they.

„Walk around in the snow all afternoon. Like a child.“
„My son was completely exhausted. I hope he has not got anything there. He’s so sensitive.“
„Mine is already cold again. That’s because she let him run like that. He was completely sweaty.“
„And all over snow. That cannot be healthy.“
„I should never have allowed that to happen. That’s completely irresponsible. “
„My daughter now thinks that could go on like that all the time. That should be a role model.“
„That’s because they have nothing else to do. And now she makes us look bad. In front of our children. “

All this was said about me, after the legendary toboggan afternoon. Apparently, the other children had told everything exactly. All this came to my ears. I was not directly told, but left behind. Of well-meaning people, as is customary, especially in a small village. There was not much to report because not much happened. That’s why you had to take advantage of these opportunities. What would be so talked about me. Because I should know too. And I thought it would be nice. Joy. Luck. Move. Fresh air. I was wrong. The next time we trudged to the hill with our toboggans, the children who had been with us suddenly had something else in mind. A mother, who saw us coming from afar, sprinted out of the house, grabbed her son and dragged him into the house. His nagging was heard widely. It was a pity. I tried not to show any signs of it, mainly because of the children, but I wondered to what extent they understood, did know. Of course, they asked me why we did not go back together. Why, yes, why? What should I say? Of course, the truth. But what was that truth? I let them assure them that we would have fun with three of us and that was the case. Even if it was not the same. Strange only that my children were almost never ill, even though we were out in the fresh air every day, in all weather and romping around. Strange only that my children hardly hurt themselves, even if they climbed trees and climbed hills, cycled and scooters. Strange only that the children always seemed to be sickly, who were so completely protected.

How many undeveloped snowmen, uncultivated ski jumps, and undeveloped snow gurgles were there? Probably more than built, and as I stood there and looked at the snow-covered hills, a tremendous yearning for these days of lightheartedness and common happiness seized me. A touch of melancholy suddenly seized me and I wish it was as it was then to wish it was today. It had been exhausting trying to reconcile everything, exhausting as much as possible to suit everyone and everything, but I succeeded. It was good, too good to think about it.

Much time had passed since then. The children were now big and had no interest in such activities, but what remained was the memory of these times together. If we sat together, then we thought of it. It was good. What remains are the shared experiences. Also at Christmas. If you have long since forgotten what you got, so common games in the memory. Cocoa drink by the fireplace. Decorate the Christmas tree. To light the candles. To read stories. To tell stories. To cuddle. Life together is a successful, love-driven life, and a trace of the meaning of Christmas.