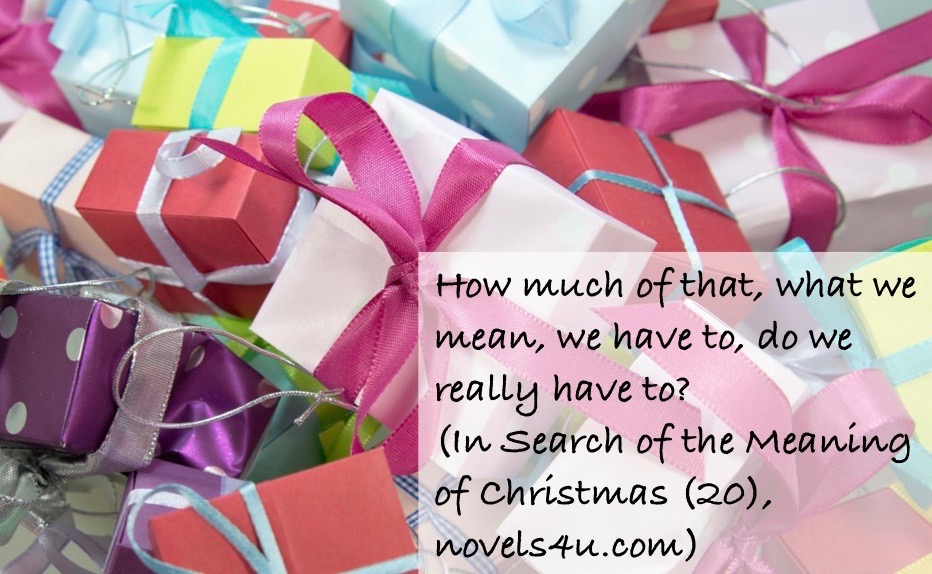 I got up in the morning. No matter where I was and with whom, in the morning I got up, brushed my teeth, made me coffee. Sometimes breakfast, if I was not alone. Not for me. Breakfast is not my meal. That passes me by. Coffee is enough. It’s not my time, it’s the morning. I do not like talking. First come to me after awakening. What works automatically, that works. That’s how the day is structured. Corner points that keep repeating, that stay the same. Get up. Brush teeth. Drink coffee. Work. Eat. Brush teeth. Go to sleep. Things that happen every day. Also, a certain security. One may call it habit. It gives the day a shape. Also. And that’s good. You do not have to start from scratch every day. Automatisms make life a lot easier. But what if there are habits, automatisms that do not do well?

The same game every year. You need presents. That’s why you go shopping, your head shatters. What was it last year? What did I get from the person last year? It costs time. It was intended to make a list, preferably just after Christmas, when the impressions are still fresh and unused. Of course, you did not do it again. That’s why you get annoyed and take it back. Always these personal requirements, which you never meet then. This year it will succeed, it shows convincingly. One is motivated, still. Then it has to be decorated. The boxes are taken out of the cellar or from the attic, at least from where the stuff you kept from last year has been put there. A little something new is added. After all, you do not always want to see the same thing. So much comes together over time. Crate piled on crate. You do not want to give anything away. After all, there are memories of good mags being left undecided. Probably the one who keeps only the good things in mind. Well that? One forgets about what one has annoyed in the last year, what you wanted to do differently. You have to shop. You have to decorate the house. You have to clean. That maybe before. You have to bake cookies. At least once. Because home-baked cookies, that’s something else than bought. Therein lies so much appreciation. You want that damn appreciation. That’s why you have to bake cookies. You have to wrap up the presents. One must. You always have to. Do you have to? It’s not a question, of course you have to. It has always been like this, for many, many years. This is Christmas. A single collection of musts. It heaps up. Of course, you have to go all year round, but as crowded as in the pre-Christmas period, otherwise it is not necessary. You do not question it either. Just as you do not question getting up, brushing your teeth, drinking coffee and all the other things you do on a daily basis. Automatisms that facilitate. But what if these automatisms do not make life easier but even more difficult? Everyone is grumpy and drained and stressed, but you still do it differently. Because it has to be that way.

„Everyone else, at least that’s what I thought, always enjoys these things,“ I said, remembering that time, in which I also said I must, „Only I did not have that. So, I thought that something was wrong with me. What suits everyone else must be right for me. Even if I was completely sure that was not the case. On the other hand, I deliberately looked at the faces of people shopping in the various malls. I did not like the fact that you had discovered something great, which you could give someone what he would like, but only anger and frustration. Therefore, I began to ask cautiously, asking how it was with the others, of course only the people who were close to me and whom I knew would tell me the truth. So, I realized that I was not at all the only one who was dissatisfied with the situation. But on the contrary. They were annoyed and stressed. But, and that was also a basic tenor, you have to do it that way, because it would not work otherwise. “
„And is not it really different?“ Mary asked.

„That was exactly the question I asked myself,“ I replied. „What of all the things I meant to have to be, is it really necessary? And, most of all, what of all this has anything to do with Christmas and its meaning, the message?“
„I think the gifts have nothing to do with it, especially when it’s just more compulsive and you’re more concerned about whether it’s appropriate than whether it’s actually an expression of attachment,“ Jesus said.
„Exactly, this bondage, to celebrate together, to laugh and to be happy, to be together. But does it need gifts? So many people moan under this burden, whether they get or give it away. We are so overrun with things that we just put what is then compulsory, in the next corner, because we do not need it, mostly,“ I added, „so that was my first starting point. I made out in good time with all the big people around me that we would not give this Christmas. That sounds easy now, but it was a hard persuasion. I felt how much people were reluctant to give up habits. Moreover, they were afraid of it, because then what would remain?“
„And did it actually work?“, asked Mary.
„It even worked great,“ I recalled this year of conversion, „There was mistrust until the last day. Because if you kept to the agreement but not the other one, you would be stupid. That was probably the biggest concern that the others had bought something and you did not even. I tried during this time to be a role model of serenity, which I managed quite well. And then the evening was here. In fact, everyone had stuck to it. But the most important experience was that it was incredibly relieving for many. They had made a must and realized that it was possible. But the fear of change was very big.“
„Change can only happen step by step,“ Jesus summed up, „if it’s about things that have been kept for a very long time. Transition always means to leave something old, but the new has not yet proven itself. It’s like a dark, cold place where you feel like you’re at the mercy of it. Most want to avoid this position, even if you can rationalize them that the new is better.“
„And if nothing external remains at Christmas, but only the living-loving attention, then that’s a dramatic change,“ I added. „There is nothing left to cling to except your hand. Or just because my hands are no longer packed with things, I can take your hand and go with you. It could be that easy. It can be that easy, once you have everything you do not want, and that is not necessary, as you then realize, finally leaves behind.“
„Suddenly, the pressure of the factual, the given, falls away from you and you feel light and carefree, just like our little rascals,“ said Mary, pointing to the frolicsome rascals at her feet, „Maybe you should remember that, what you really remember from the Christmas holidays. The gifts are often forgotten quickly. But a walk in the snow or a cup of tea afterwards to warm up in front of the fireplace reminds one. Romp and laugh and be happy, joy in the feast of love, without burdening yourself unnecessarily. Just be with you, make life as alive as possible.“

It is not easy, but possible to change habits, to question and find a new way, including at Christmas, so that the basic message is heard again and above all implementation, in the loving-living, lively-loving attention to you. Then the feast will be a successful one, which will continue in the rest of the year. Then all the effort would have meaning, because ultimately what makes you really happy together, you and me. To remember again, that would be the meaning of the pre-Christmas period. So that, instead of having to have fun again, cheerfulness occurs that does us all so well.