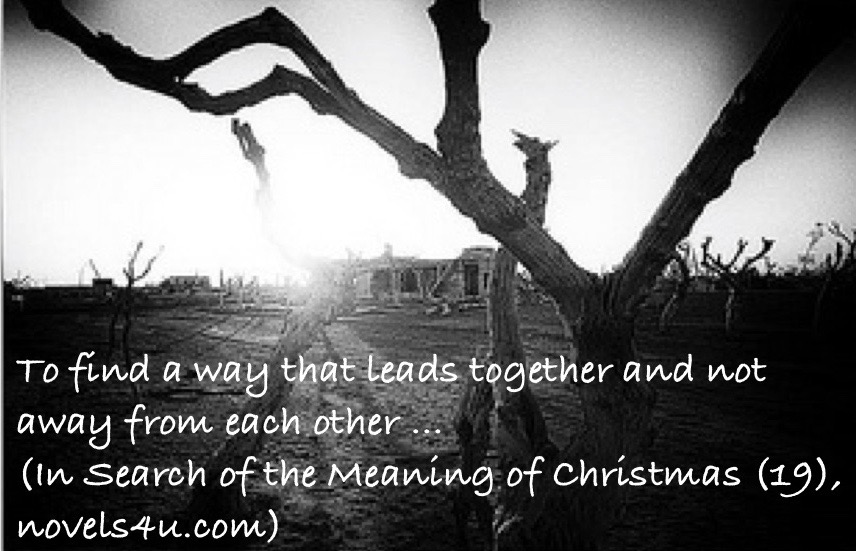 „On the way to the realization of the meaning of Christmas,“ I picked up the thread that day again, „On the way. Through life. Of life. Departure and Staying, that’s what it’s always been, all our lives. We are born. It is a departure into a life we did not have before. It is not difficult. For the most. They are guided. Leadership also means, no, above all, that we get the perspective of those who guide us. Lovingly. Undoubtedly. Those of us who are lucky enough to be lovingly led. Facing. Sometimes. Empathic. Absolutely. But always in a way that explains the world to us, as it sees the one who leads us. It is from the beginning a steering in a certain, seemingly predetermined and only possible direction. It’s indoctrination from the beginning.“

„Because we have no choice,“ said Mary, „How else are we going to explain the world than how we know it, how we see it. Everyone has only his own vision. He can pass that on. He can testify and stand up for it. Everything else is nonsense. There is no value-free view of the world, of life and of the Other. Only the one we have, of course restricted, but we have no other. But it would be a crime if we left it open, leaving this new arrival in life alone. Finally, we also go part of the way, take the child by the hand, as long as it is necessary, until it can go its own way. Although this is a requirement, but quite legitimate to provide security in an otherwise unmanageable world. Then the hand is let go and the one who is guided until then takes the lead for his / her life. That’s the sticking point. Many manage to take it themselves into their own hands to discover the world in spite of all defaults on viewpoints. Because they are allowed to question the previous views and change them until they have found their own. Then they rediscover the world as it should be for them, settle in and stay in a place they may possibly call home. “
„And then there are those who can never question, never been allowed to question,“ Jesus said thoughtfully, „Those who lead them are of the opinion that apart from their view of the world, there can be no other. At least not possible. They have the only true one. As a result, as soon as the child is able to do so, the child is completely distanced from it, or allowed to continue obediently, without lifting his head without looking left or right, and the complete distancing is also a sign of it that this kind of worldview is so deep inside us that we can only cope with it in opposition. We will not let it go.“
„As some do not get rid of the hand that led them,“ I added, „the hand that guided them. They let go. The children, the young people, the young adults, they go on, but they still cling to this hand in their actions, in their implementation. They do not let go, they remain trapped in the infantility, because they think that otherwise they have no protection. It is those who implement the given perspectives in all radicalism because they can only maintain the connection as they think. Radicalism and fundamentalism. That’s the stuff that nightmares are made of. There is so much that can stand in the way of healthy development.“
„What is a healthy development?“ Mary asked.

„A healthy development is that I let myself be guided for a while, as far as it is necessary,“ I said, „I let the world show and explain me, as understood by those who guide me. I ask, questioning, because I am allowed to, which causes both to expand their gaze. At best, as I said. And when I am ready, I let go of my hand and continue on my own, becoming more by walking my way, becoming alive for myself. Break into this life, which is really mine, stay connected to what is given in a form that is my starting point, but gives me the freedom to develop it further. To develop me further. Departure happens every day, into life. From time to time people accompany us. Some stay forever. Connectedness. Deep familiarity. Others only touch us. It is fine that way. We learn. We are growing. We go ahead. As it should be. And it is always the uncertainty in which we go, the unknown. But if we have got the security, in the beginning, then we are not afraid, neither of the uncertainty, nor of the unknown. Anyone who has not gotten security, for whatever reason, cannot help but cling to the acquaintance, because otherwise he loses the ground under his feet and goes under. He who is afraid cannot think. “
„Joseph and Mary also set out, then, into uncertainty,“ said Jesus, „I mean, it’s a bit of relative, because they did not sell their house to move away forever, nor were they expelled. Ultimately, they did nothing but a little trip. But even on this little journey, they did not know what to expect. But they had confidence, trust that it would be good, anyway. Even when, after hours of searching for a neighborhood, after exhausting their last chance, they were still standing on the street. At this point, it would have been perfectly legitimate for some desperation to have spread. By human judgment, so you could say, there was no possibility to find a place to stay. This is the hope against all hope. And then something happened, even if it was impossible to human judgment. But this human discretion is so limited because it does not know about the links and contexts, cannot know, because it only sees its own small section of the world. Everything else stays in the dark and it’s like there’s no such thing. In that sense, it does not exist either. Whoever speaks of impossibility only expresses that there can be nothing outside of this small, restricted perspective. But my parents were not worried. There was more than what they saw, more than they could survive. And so, they were given the opportunity to spend the night in the stable. Where I was born. A stay for a short time, take a deep breath, and then continue. Always on. From the starting point to the end point. From birth to death. Stay and go in one.“
„Departure, because we are given the opportunity to start over,“ I continued, „departure for this path, which will be by going it. Stay, because we are always who we are, at the moment, in each one. No matter where we go, we always take ourselves, ourselves and our view of the world, our own specifications, the glasses through which we see the world without noticing these glasses. We probably cannot even notice it, it is too close to us. It only hurts when we take it off. Then we may close our eyes, at first because we do not want to accept what we see without our doctrinaire glasses. As the representatives of the Church refused to look through Galileo’s telescope. They did not want to see it, do not know it. Because it would have questioned everything that had been in the past, she would have questioned themselves. And no one likes to leave the safety, the comfort zone, in which he is.“

„The people who leave now, probably at this very moment, set out to leave their country, where it is dangerous for them, where there is no survival, do not do it because they want to conquer the world, but because they want nothing other than to live and a place where they can do so in peace and security,“ said Mary thoughtfully, „everything familiar, everything known leaves them behind. You do not just do that because you just enjoy it, but because the need drives you. Quite different than when we jet quickly where to meet supposedly foreign cultures, look over it quickly and rightly trust that everything is as it was when we come back.“
„Cultural tourism, where we do nothing but relocate our habitual life to another region for a while,“ I added, „the way I left to come here just to find out that’s exactly how it is like at home. The landscape is different. People speak a different language. But that’s about all. I am the one I was at home. Which I will always be, no matter where I go or how far I try to move away, there is no place and no distance that could separate me from me. “