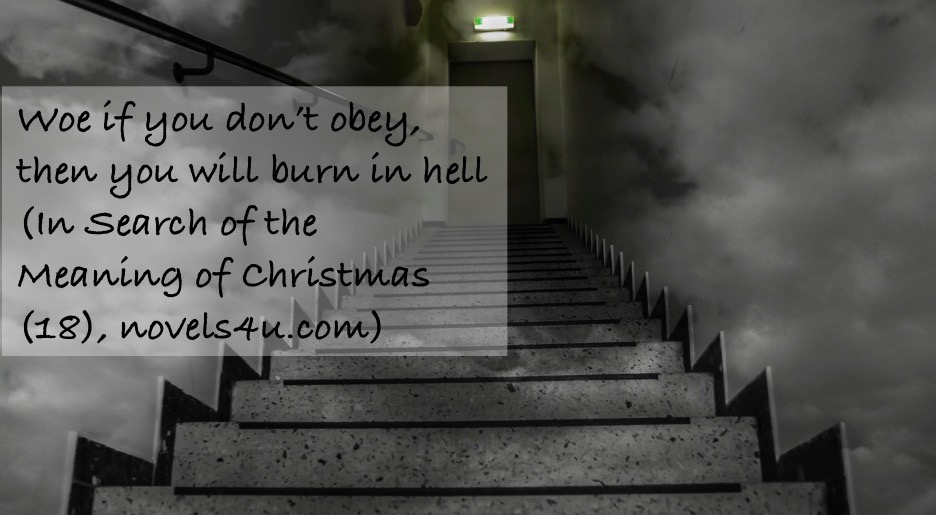 The closer the big day came, the more restless I became. The big day, whatever that meant. Somewhere in me, resistance spread, because only by the fact that I made so many thoughts about it, day after day, now for almost three weeks, it was getting bigger, almost overwhelming. In addition, I wanted to find that meaning. Had not I found it long ago, finding it in living love, in loving life? It seemed to me that I could not stop there, because that would mean that this sense was limited to that one day of the year, when it should apply every day of the year. Thus, Christmas diminished to an extremely symbolic story, but only to a story, as there were thousands of others, which were also significant. But that was not worth the effort. Not in the least. It should be a day like any other. A birthday, a day of remembrance, like many others, if you like. This was accompanied by the opportunity to release the celebration. And that was the general meaning. But to what extent was there such a thing as universality?

My thoughts turned in circles. It had so much to do with it. All shopping madness, the preparations and the exhaustion by the same. And I did what I always did when my thoughts turned in circles and yet I found no answer. I scrubbed the floor. On the knees. Starting in the kitchen. For some reason I did not know, I always started in the kitchen. Scrubbed the floor on my knees, so that I felt my body, because with time, the knees, the cross and the hands hurt. I continued. To feel even more and to scare away the thoughts that had stuck so stubbornly, but did not come from the spot. In most cases, the knot broke. Others took their place. Finally, I sat down. The kitchen flashed as it had probably not done since their establishment.

„Maybe it’s just a way to start again,“ I finally summarized, rubbing my aching knees as if using something.
„What do you mean?“, asked Mary.
„This attachment to life over the year, through all the commitments, takes a back seat until we do not even think about it,“ I began to explain myself and my thoughts, „Then comes Christmas, and if we accept the message like that as it is, to recognize the meaning, then the forgotten is here again and we start again from the beginning, or at the place where we had forgotten it. Then, joie de vivre returns, as it should be, which will hopefully last another year. So, every new Christmas is a chance. “
„Joie de vivre?“ Jesus interjected, „It was last Christmas Eve, when I decided to attend a Christmas Mass once again and observe what I had always seen, which I always hoped it would be would change. People chattered, sometimes laughing, until the moment they entered the church. Then suddenly they were quiet as a mouse. All joy and happiness remained outside. As if one had to be ashamed, if only somehow a positive mood was expressed. Serious, almost gloomy, were the expressions. Strict and disciplined. Every life was extinguished, trapped in a spiral of confession and forgiveness. “
„Guilt and sin,“ Mary took up this thought, „It’s the means to keep people in fear. Obscure specifications are given that people do not meet, never fulfill. It’s too hard, but as soon as it’s gone, it’s burdening her conscience and life is going. There is a constant squint on the missing. The own. There is always something. Completely impossible that someone does not sin. It is already turned and bent so that people can only sin. And bit by bit it sucks their lives, wedged in a corset of obscure rules and commandments. There is only one sin against life and its unfolding. Everything else is nonsense. The only question I would have to ask myself was that I was missing out on life or not. As in the participation of a church service. And when people are lucky, they pick up the thread they had cut when they entered the church when they left.“

„Sin and guilt,“ Jesus reflected, „There are people who are said to blame them, as only God Himself can, as is the natural feeling in us, which is always at the origin of life facing, shows. They know exactly their power, these representatives of God. What a farce.“
„Presumptuous and grotesque and blasphemous, actually,“ I summarized, „It’s the same ones who grope little children. Sexual abuse, supported by a life-threatening sexual morality, so that it is frowned upon to lead a normal sex life, which makes the impulse in this way. By abusing children. In the homes, children abused. Women in the Magdalen homes. Because they have sinned. You have every right to it. Abuse and mistreatment, destruction of countless lives within an institution that presumes to judge others‘ sins, condemns them, but they themselves can sin as much as they want. It is normal. It happens. Everyone looks away, because everyone knows it. Until it is revealed. Until a scandal pulls through the media. And the perpetrators will continue to be protected. You will not be punished. Rather, they may continue as before. What is more, those pillories are being pilloried for revealing these scandals, because they only have the purpose of harming the Church. And nobody cares about the victims. “
„Nowhere else are the victims so unimportant,“ said Mary, „Nowhere else, then where you never tire of exposing others to much smaller offenses and imposing penalties on them. Since suddenly it is only more to protect the perpetrators. Then money and power are used. “
„Repentance,“ I said, „The perpetrators are stylized as victims of medial mud battles. There is no reason to surrender these to the secular jurisdiction, because the sense of guilt is often completely absent. One has done nothing to the children and not to the women. And if so, then that is regulated internally. The state does not interfere, and everyone else has nothing more to do than humbly bow their heads and look at themselves. For those who preach morality, they do not have to live long. Nowhere else is hypocrisy written and pursued as consistently as in the Church.“
„May I find a reception in one of the episcopal palaces?“ Jesus wondered, „A clochard in transit, of which there is nothing to be fetched?“
„Certainly not,“ I proved convinced, „and it would be so easy if love should be lived. To enter a church and not have to leave the laughter outside. To use this place to gather for the joy of all, and to bring to life the communion that is said in communion, and then go out strengthened. No thread has to be cut, because the joy is allowed to go in, in and out, live inside and outside, until there is no difference, except that you do not get wet with a roof over your head when it rains. “
„And finally to end the hypocrisy, because it is no longer necessary, because instincts do not have to be redirected because the priestly profession is not predominantly seized by mentally disturbed personalities, to which the constant guilt complex coupled with unspeakable megalomania, inevitably lead,“ added Jesus, „Then the Church would have recourse as a refuge again for the lost and betrayed, and also the Clochards in transit, for life is nothing but a transit from birth to death. The mission would be to use life by devoting oneself to one’s tasks in living, loving devotion. And every year, the message goes out for Christmas, because it is never too late to go this way, to make a fresh start. Seen in this way, Christmas is an invitation to reflect on this fundamental and finally translate it into life. “

Taking a new path means nothing more than recognizing the need to put one foot in front of the other, to see where it leads us. Maybe even a realization of the meaning of Christmas.