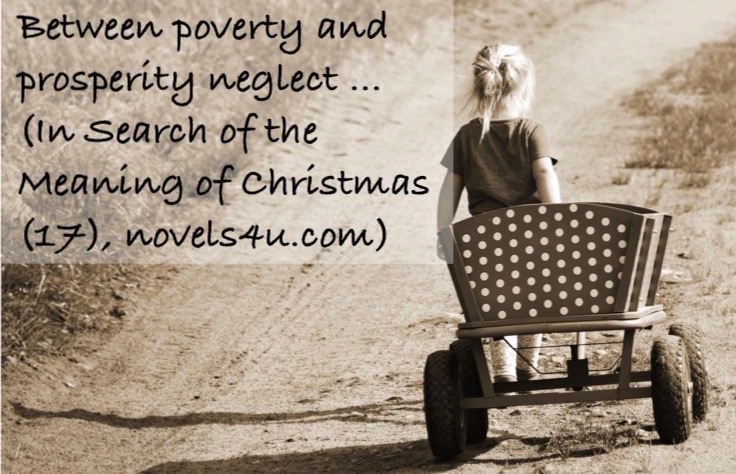 It had actually snowed, apparently all night and it did not stop. No ordinary sight in that area. Hope and her babies were a little confused, but also curious. They poked their noses in the snow. There was so much to smell, as if the smells in the snow were even more intense. Joy played catching snowflakes and after initial skepticism, his sisters did the same. It was a pleasure to watch them, the joy of discovery, the lust for life and all its secrets. It was contagious. Memories came again. Tobogganing. Laying in the snow, moving your arms and legs up and down, and when you got up it looked like an angel was lying in the snow. Snowball fights. Build snow burbs. Until you were completely soaked and rewarded with warm cocoa. Then they told, breathless, with red cheeks and full of happiness. The mother listened and smiled. That was then.

When I walk through the place, at home, or even where I live, I have not found any traces in a long time. No sledding. None of snowballs. None of snowbound. And the angels had flown away long ago.
„Where are the kids?“ I asked myself and the others.
„At home, warm, so they do not chill,“ Mary said with a shrug.
„At home, because someone would have to go and keep the activities under surveillance,“ Jesus said.
„You could play along. You could take turns taking care of and overseeing,“ I replied. „Is it really so long for so many people to have been children? Do not you remember that they had fun? “
„There’s no time,“ Jesus explained. „You have to clean up the house, especially on the outside. Also, inside, so that everyone can see how well prepared you are for Christmas. If you come for a visit, he will praise the beautiful decoration and the Christmas spirit, but certainly not that the kids have fun, especially the adults. Life is way too serious to have fun. Stand for hours at the punch booth, that’s alright, but not building snowmen. It’s not important. It makes no sense. Futility in the game. That one wants to have been banished. That’s why the kids are sitting in their rooms. With PlayStation and all the other game consoles. Nothing can happen. “
„And they eat themselves fat and sick,“ I added, „because of the loneliness and the deported are in abundance. Go play, you have everything,“ I mused. „Anything but someone to share with, anything but someone who listened to you, read stories, hugged them. “
„While children in other parts of the world have no childhood,“ said Mary, „you have to work in the mine. Or in the factory. Or in the fields. Or in the war. Or in the brothel. But you do not have to go that far. Again, there are children who need to freeze or starve because they lack the essentials. You are ashamed. That’s why the doors are closed. Poverty hides, because no one should know. You are a loser, in a system that tolerates only winners. Poverty stigmatized. There is nothing to gloss over. It is the lot of the others. Always the other, because poverty mutes. You do not want to talk about it, you withdraw even more. The others do not want to touch. “
„Door to door. Poverty and neglect of prosperity,“ I said, „It seems to me that there are only extremes. In families who could read to their children, they prefer a machine that takes over. There is no time. After all, there are these sophisticated devices for keeping the kids busy while the parents are dedicated to their own lives. It is more important. As soon as they are in the world, the only concern is how to get rid of them. After all, you cannot turn your whole life upside down, from the kids. But it is the best thing to turn his life upside down, or perhaps from the head to the feet, because it was previously in trouble and you saw nothing more work, nothing of the happiness and beauty of the world, nothing of laughter and the joy of things that had no use but to have fun. But there is no time for it.“

„And then there are the parents who would like to read to their children,“ added Mary. „It will not work. Because they cannot read, maybe. Because they cannot afford books. Because they do not have the strength. Two jobs, and still not enough to live. Just to survive. There is no power to devote to the children. You do not have the patience. One is exhausted. Losing your life, even before it really started. There are no prospects. Futility is in the air and pollutes every positive approach. Always only extremes. There is little in between. And the alcohol plays a not to be underestimated role. Parents drink, drink too much. To escape the everyday life. The kids do it as soon as they can. Even more destruction. To squander the money, which is not enough anyway. Therefore, the makers of social support, we make coupons, only for food and for the satisfaction of basic needs. We do not finance alcohol. They explain it while they sip champagne. They have worked hard too. Even the cleaning lady, who comes from the former East, works hard. And cannot afford the champagne. You save yourself the social security contributions. This has nothing to do with each other, it is claimed. You should just be diligent. You know how these people are. Lazy. That’s why we are rich and poor. Also, the social parasite. They just do not want to work, they cannot help. It is unbelievable that they receive an unemployed income while we work crookedly. Work crooked? At the receptions and soirees, at the vernissages and banquets. You surround yourself with art and culture. They have no culture. Also, no art. You have to concentrate on survival. And to imitate us. ‚If only you …‘, they are told, but they see that it does not matter what they do. They do not come out. Constantly these lies. The cheating for a life. One by one. And the children, who have everything, sit in the middle of this all-is-about, everywhere it flashes and speaks, there are no human voices. If the child says something, there is one. The only. You only see for a moment. Whether the child is also good. Whether it is going to bed at the right time. You bring it to school. By car, because there are no five steps to walk. It could happen. Life, for example, or worse. It is picked up, in the late afternoon, when you have exhausted the full care time. Shutdown in public institutions is followed by parking in the nursery. At some point there is a letter in the room and it says that the child could not stand it anymore. You find it dead. You do not understand it. You have always done everything. You have invested so much. The latter is not said aloud, but you mean it. Everyone knows that you mean that all the money you have invested in is gone. One has done everything, except the one to have a relationship with the child, to be with him, to give safety and confidence, to give meaning and joy and to love it. All the folly becomes visible in it. And yet nobody sees it. You are devastated and can no longer understand the world. It had everything. Always and from the beginning. Speechlessness, because no one listened, while next door a child sits in the dark, in the cold. Because there is no money for the electricity bill. And it is scared. If daddy has drunk again, then it beats. It is sitting in its corner and is afraid. There is no one there. The mother cannot comfort the child. Do not protect. She does not even have comfort or protection for herself. It happens, door to door.“
„And in the midst of these extremes there is a child in a manger, the symbol of acceptance and acceptance,“ I concluded. „It is weighed in the arms and smiled, addressed and held. As it should be. A roof over your head and a warm camp, it does not need to feel secure. It could be so easy.“

Rediscovering Christmas as a feast of acceptance, opening up another aspect of the meaning of Christmas, and at the same time thinking that we have never been so far off.