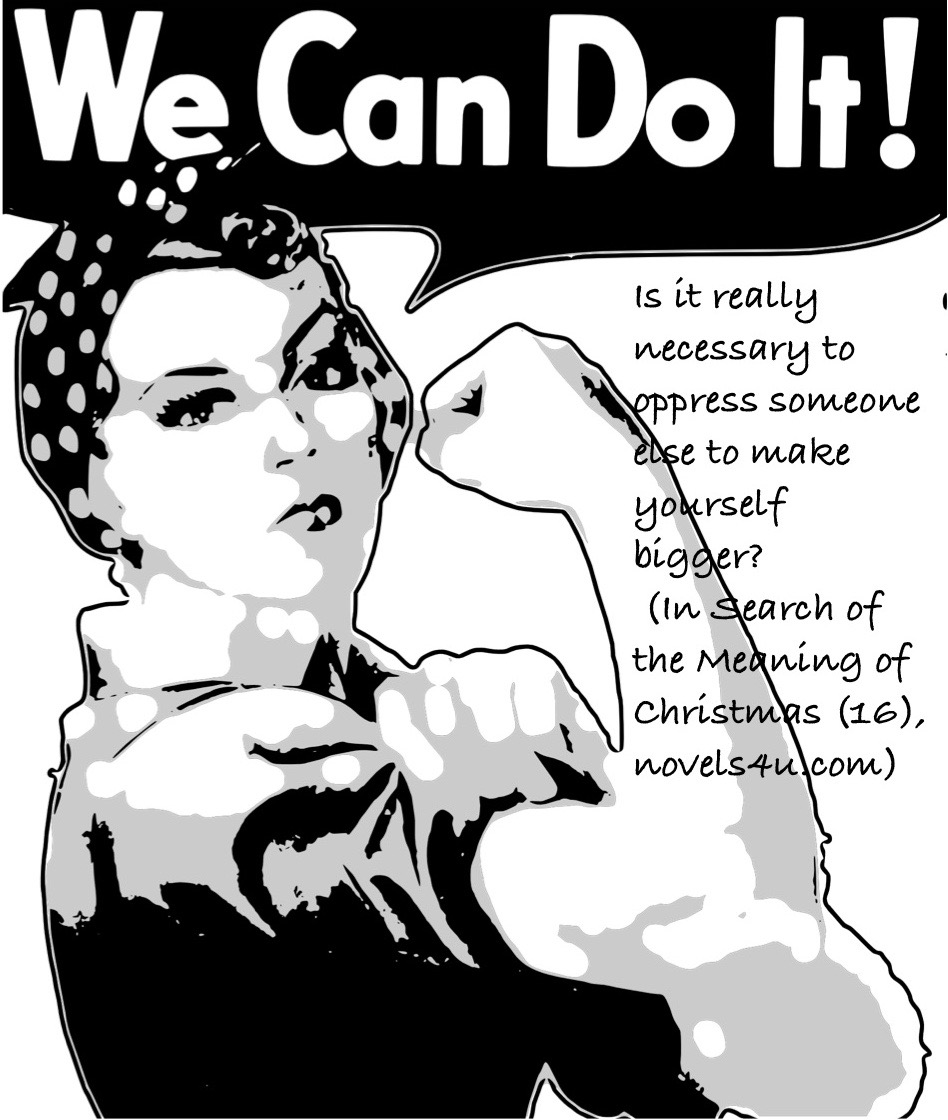 Mary was completely engrossed in her actions, so completely that she saw nothing and no one around her. She sewed a dress. In the first step she had designed it, then made a pattern, tailored the fabric and was now to sew it. To be familiar, to get involved in this, seemingly simple activity. The monotonous rattling of the sewing machine had something reassuring, almost meditative. And then it was suddenly gone. Mary presented the finished dress to me. It was dark red, high-necked, with long sleeves and reached to the ankles. Very simple and elegant in its simplicity.

„Simple and elegant as love itself,“ I remembered, „It envelops you without concealing you. It does not distract from you.“
„Should not it be like that?“ Mary asked, „Underlining, but not standing up for herself? The need to dress is out of the question, but that’s why you do not have to stand behind it.“
„Not to hide, wherever, but to find expression in freedom,“ I tried to summarize.
„But you are already aware that this is a privilege, you look at most of the world,“ Mary wanted to assure herself.
„What exactly do you mean?“, I hooked, because I did not know exactly what she meant.
„To be able to present yourself as a woman as you wish, without having to ask permission or fear that you will be attacked,“ she said.
„I am quite sure,“ I affirmed, „the openness, the bond with the earth as well as with the sky, the all-embracing that has always frightened men.“
„Lilith drove her away and kept the bland, sweet, cute, easy, steerable Eve,“ said Maria, „but just expelled, not killed, so she and her mind are still present. It cannot be deleted altogether. Therefore, a new trick was used to keep the women small.“
„They made you bad. Beginning with original sin,“ I added, „The guilt of being driven out of Paradise and now living in the hostile world weighed on Eve’s shoulders. That is why it is officially announced that he rules over her, man over woman. To cement this even more, women were denied education. Then they said they were stupid. From the ecclesiastical side a reservoir of sin, a work of the devil, which is there to weaken the man. She alone was the seductress. Their openness, their affinity, their non-male controllable sexuality were cursed and devalued. To date, this is happening. One effect of this is female genital mutilation. But it is more than a cruel, painful act; it is the destruction of female identity. Still further in the war goes. Women are systematically raped and destroyed. It’s about humiliating the enemy over the women.“
„Nowadays, violent penetration is commonly seen under rape,“ Maria continued, „but these rapes are hard to beat for cruelty. With machetes, broken glass or broken bottle necks, the female genitals are literally torn apart. Not only the possibility of feeling pleasure is destroyed, because the female genital is much more complex than the male. While the man has a single strand of nerve, the woman’s nerves weave around like a net, and when the nerves switch, the connections glitter like a starry sky connected to the brain and the rest of her body. Women feel so holistic. And they are also destroyed holistically. Many falls into a deep depression, take their own lives, because they do not find the connection anymore. The body can often be patched up again. But the connection cannot be restored. The nerves are destroyed forever.“
„And even these interventions are not welcome, especially in areas where this mutilation of women systematically used as a weapon of war,“ said Jesus, who was out with the dogs and now came to us again, „So in the Congo. The gynecologist and Nobel Peace Prize winner, Denis Mukwege, operated in the years 1998 to 2013 together with his colleagues in the Panzi-Hospital in Bakuvi 40,000 victims of various rebel groups and soldiers. He had to realize that the perpetrators were always cruel. But he did not leave it to reunite these women, he turned to the world community to draw attention to this injustice. The deeds themselves were outlawed internationally, but nothing else happened. Not a single one of the perpetrators has been brought to justice so that the atrocities against women continue unhindered.“

„That’s what the perpetrators did against him,“ Mary said. „In 1996, the gynecological ward in Lemera, where he worked at the time, was completely destroyed, and in 2012, narrowly escaped an assassination attempt. Again, the perpetrators go unpunished, while those who fight for the victims are threatened. Helping others is life-threatening, you might say. “
„That’s it,“ I said thoughtfully, „did not a young activist from Pakistan in 2014 receive the Nobel Prize for her dedication to the education of all girls?“
„That was Malala Yousafzai. She was just 17 years old at the time,“ Mary confirmed. „They also had an assassination attempt on the school bus. She barely survived and then had to undergo lengthy operations, but she survived and now works as a UN peace ambassador. But once again, a person was attacked and seriously injured, advocating for a right that, according to the Human Rights Charter, is the basic right of all, the right to education. But still predominantly women are excluded from it. How important it is for men to keep it that way is made clear by such incidents. ‚Keep them stupid, small and dependent‘, remains the motto. And this is still being followed diligently.“ And in front of me the picture of Lilith appeared again, this proud, tall, intelligent woman who could not bear it, the division and the opposition. She wanted togetherness and exchange and familiarity. Together, the world should be discovered and a life built, but that was not desired. She was not wanted, so that in their place came against each other and fear and mistrust. It is shameful to see how much talent and skill is simply squandered because one is too proud to acknowledge that everyone can contribute, regardless of gender.
„It’s very exciting that gender matters so much,“ I commented, „but in most areas it would not matter. What drives man to always have to play the oppressor? “
„Maybe it’s about making oneself look bigger when you make others small, feeling stronger themselves when you defeat someone weaker than you,“ said Mary. „Actually an indictment when you need it. But it starts with education. If boys are educated to despise women, they will do it. Few just escape this indoctrination. Of course, it is also about self-esteem. Some need the oppression of others to feel superior to themselves, better than they really are. The procedure is becoming increasingly brutal and comprehensive. And those who point this out are persecuted, hurt, sometimes murdered.“
„In doing so, they join the long line of activists persecuted, arrested and killed for their commitment, whether to the environment, our fellow creatures, the poor, the women, the migrants,“ Jesus said thoughtfully, „It does two things. On the one hand, many will wonder if they undertake such a dangerous activity. Deterrence works, and who can blame it on people? On the other hand, the attackers will continue to do so because they see that it works. The attackers, these are often large corporations, the politics that see their ambitions endangered. Activism is usually not good for business. That’s the simple, naked truth. “

And yet, we celebrate Christmas as a feast of love, while in truth the world is ruled by money and slaughtered people who do not want to play this game. We also close the windows and doors so that you do not see anything. Because we are fine and we are celebrating Christmas as it has always been. We do not even look out of the window, out there, where they are, who are suffering, starving, freezing, caught, we are not looking out because we could see it. We do not want to see it, we do not want to admit it. We want everything to stay as it is in our own, healing, little world. Even though it is getting harder and harder to look away. You do a great job. It is still feasible, so in the end you can say in good conscience that you did not know it, as many times before in history.