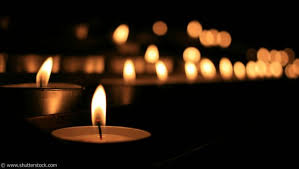 It was a wet, cold day, this thirteenth of Advent, one of those on which one prefers to pull the covers over one’s ears and embrace oneself. Hedgehoging – like the hedgehog in his winter home. Even the little ones seemed influenced by the weather, a little bit quieter. It was so dark and murky. Obviously, that one did not devote himself to the sunniest thoughts.

„To light a fire in the chimney to chase away the cold,“ I said, „to light candles to clear the gloomy and murky, even from the thoughts. To be a light in the world, and who knows, maybe it will withstand the November rain. “
„A light in the world, against all hostility and hardships, against rain and wind,“ said Jesus while looking thoughtfully into the flames, „There are such lights out there, over and over again, otherwise one would have despaired of humanity long ago have to.“
„Do you think of whom certain?“, asked Mary, who seemed the statements a bit cryptic.
„Yes, just this morning I remembered,“ Jesus explained, „We are the light for these four dogs. They would be frozen or starved out there. Now they are safe. Now you could say that this bitch should not have had babies if they are not wanted. But this is not possible with a dog. He follows his instinct, which moves him to reproduction, in the sense of the species, but man is quite capable of doing so. He can control it and does not have to put children into the world if he does not have the means to provide them with the necessities. Unless he’s forced to.“
„How can you force a person to bring children into the world?“, I hooked up, because I thought that such a thing could not or could not.
„I am thinking specifically of the former Romanian dictator Nicolae Ceausescu,“ Jesus began to tell, „His vision was to increase the Romanian population to 30 million by the turn of the millennium. Currently, the country has approximately 18.8 million inhabitants. It was of course necessary that many children were born. And to achieve that, any action that could be taken against the blessing had to be nipped in the bud, best of all. Thus, in 1966 contraception was banned. But even abortions were severely punished. Illegal abortions were nevertheless carried out. Not least connected with great dangers for the mother. Many tried it themselves, e.g. with wires. As a result, children with disabilities were born who no one wanted. They were deported to children’s homes. One of the most notorious was Cighid, where disabled children, tethered in a cot, almost naked, malnourished and without heating, face death. You could have just killed them, but you preferred to let them die slowly. A children’s concentration camp in the middle of the so-called civilized world. Caregivers came, six for 109 children, fed them poorly with inferior porridge, and otherwise left them to themselves. When liberation from the dictatorship came in 1989, people were stunned by it. It went through the media. Then it was forgotten again. People forget so fast. But back to the achievements of the dictator.

Thus, the birth rate already doubled within a year. Initially, the state support program still came with the demands that were attached to it, such as the provision of kindergartens and schools, but in the end,  they remained inadequate. 40% of the population lived below the poverty line. Desolate relationships for the families. Poverty and violence reigned, and still do today. The children ran away from home or were chased away, left behind. Then they went to the sewers. Children still live there between the ages of 3 and 17 years. It smells and is loud, but at least it is warm, and the winters in Romania can be damn cold. Outcasts of society, they live, live from hand to mouth and sniff drugs. Otherwise they probably would not stand it. From time to time there are aid transports and throw sacks on the ground. The children grab the parts and sell them. Nobody else cares. That’s the situation. You know it and yet nobody does anything. Structural changes must come from politics, but they are doing well. You see no need. And those who want to change things often do not have the options, they say.“

„And where is the light that you spoke of?“, Mary asked, „I think you do not want to put us off with these gloomy pictures and then move on to something else.“
„One day a priest from Holland’s Free Catholic Church came to Bucharest after seeing a report about these children on television. Don Demidoff, that was his name, could not believe it and reproached the editor with sensationalism,“ Jesus said. „But when he arrived, he realized it was even worse. And at the same time, he knew that his purpose was to help these children, at least as many as he could help. He stayed. Bought a house and was able to accommodate 50 children. He also set up a school and over time it was also possible to learn a profession. He found out very quickly that these children could no longer be accommodated in a regular school because of their experiences on the street. Therefore, he adapted the pedagogical concept to the children, and not vice versa, as it is only too happy to do. The word spread so fast that he had not even finished when the first children were already at the door. He was the light for these children, and has remained so for many years.“
„A beautiful story,“ I had to admit, „A success story, so to speak, and one or more people who used their lives to help others. That too can happen in the church.“
„Well, it’s not that easy,“ Jesus admitted, „As good as it was for the children, now that they had a home and someone they could rely on for them, so much was this Project a thorn in the side of many people. He was attacked, slandered and boycotted by the state and the church. Above all, from the German Bishops‘ Conference, old gentlemen with a stately salary, who sit warm and dry and well-fed in their princely domiciles and behave in this way, have no other worries than to make life difficult for a man who does nothing more than to help the poorest of the poor. That would be exactly my message. And they also act in my name. But as strong as the wind was blowing and the rain was falling, Don Demidoff remained steadfast. Again, and again, the project was close to the end, and again and again he has managed to continue.“
„So, you want to tell me that the German Bishops‘ Conference has nothing better to do than make life difficult for a priest in Romania?“ I wanted to make sure that I understood that correctly.
„Exactly,“ Jesus affirmed, „you clearly have nothing better to do.“
„But there is another possible explanation for her behavior,“ Mary interjected. „As you said, it is actually the role of the shepherds in the church to look after these very people. Now this is tedious and disgusting. Therefore, they prefer to sit on their fat butts. But it gnaws the conscience, because they finally know exactly that they do exactly the opposite of what you wanted. Therefore, they condemn and demonize people who do that. It distracts them from their own idleness, and also from the fact that they were never a light and will not be.“
„Nobody should be better than you, because then your own idleness only falls on,“ I said thoughtfully, „But instead of taking a role model, you go the way of the informer. Like Peter once.“

The closer Christmas came, the clearer it became to me what the meaning of Christmas was, to live life lovingly, to live love alive. It could be so easy, but instead of being a role model to those who put it into practice, they were thwarted, driven out, and destroyed. Especially of those who would have to do it exactly the other way around, who had an assignment to live just that message. In fact, they probably did not tire themselves of that, but to live them is obviously too much. But I was on a good way in my search for the meaning of Christmas.