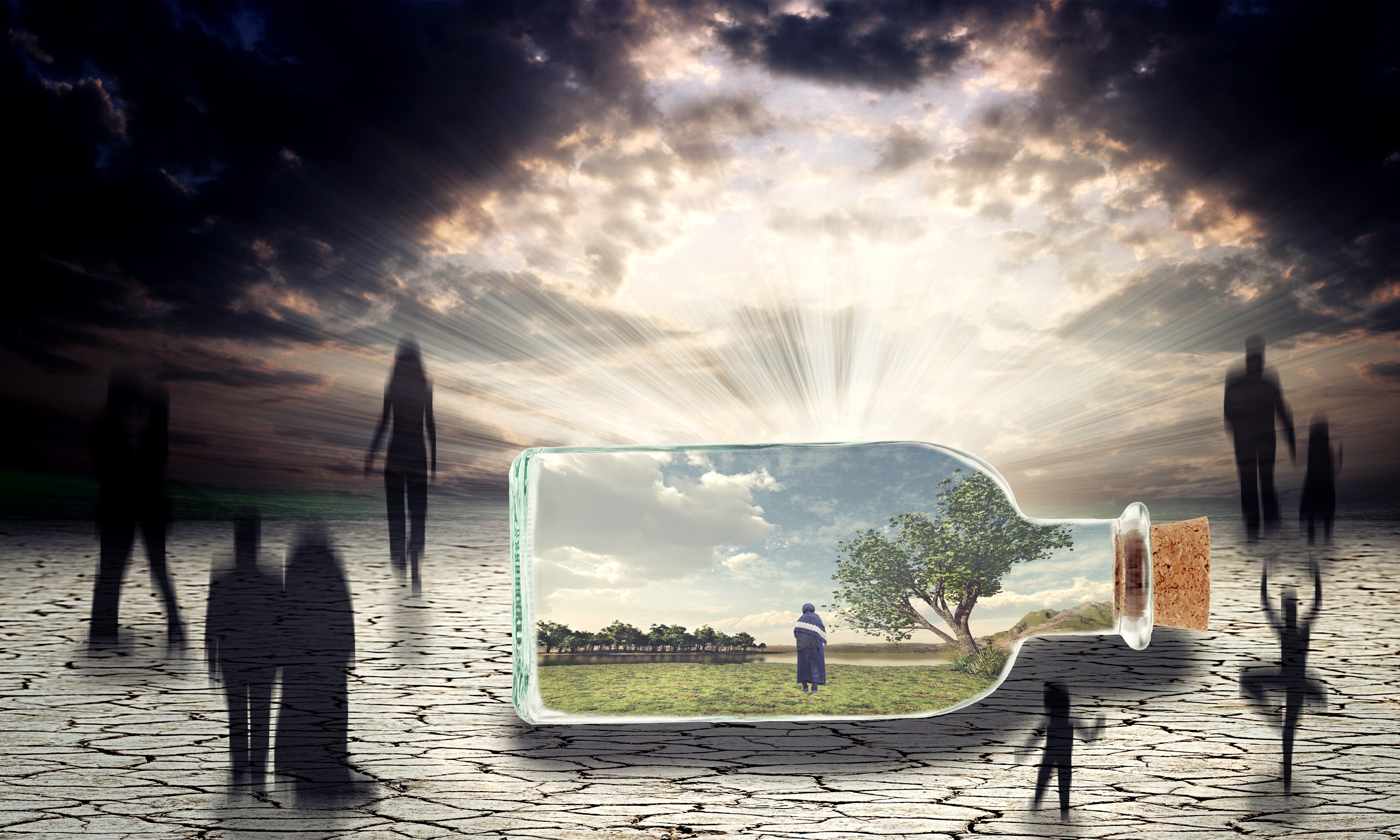 It was that the storm was raging, all night, so much that the walls seemed to tremble and the roof ducked, against the wind, the thunderous rain. The little ones, Joy, Sunny and Grace, had snuggled closer to their mother, who was shaking with fear herself. I had sat down with them and felt that it was good for them, as if, alone through my presence, I could avert the unknown and the scary and protect them from it. They believed in me. So they calmed down and slept. Unlike me. „Why,“ I said quietly, „trust me, believe that I can protect them, whatever it is?“ And at some point I fell asleep, on a blanket on the floor, Hope’s warm body next to mine, the Little ones rolled up in front of her stomach. Already falling asleep, a hunch rose, became visible for a moment, and then continued to flow, a sense of trust in one another.

„Explaining, showing, discussing, giving, attesting, diagnosing, analyzing, synthesizing,“ I enumerated, that day, the ninth of Advent, when the storm had settled and the waves had smoothed, „These are all concepts, which we like to use, if we want to introduce someone to something. They are important terms. Data, facts, findings, be they technical, scientific, political, social or some other nature, to pass on, to convey. So, all those things that you grasp and classify with the mind, pragmatic and simple. It’s about so-called knowledge. The knowledge we need, perhaps to do our job, to follow a discussion, or even just to be able to state it in case of a fall. It has no effect, no real. It is like that and there is nothing to shake it about. The earth is in the form of a geoid. It is not a disk and the sun does not rotate around it, but vice versa. An apple falls to the ground, everything else that has weight. It does not float in the air. Sound waves transmit sounds, bring my words to your ear. In this context, these verbs are also fitting, because they signal, at least, that you stick to the facts, the data, as far as possible. But not only do we use them here, but also to teach someone something that cannot be explained, at least not like the freezing point of water or the reactivity of hydrogen.

It is unexplainable, the liveliness that flows through me and encourages me to accept life as itself. Sure, the bio-chemical processes in my body that keep me alive can be explained, but not what’s wrong with me reconciled with this life and makes it alive, as one more than the beating of the heart, what the sun shines on me and makes the wind in the hair appear as a tender embrace, which puts a smile on my face, simply because I am there and can breathe.

It cannot be explained, as often, as long as it has been tried, love. Not with analyzes, statistics or studies. There is nothing to explain, nothing to analyze, nothing to study. All this is meant to appeal to our minds, fool us, it would be as simple as a mathematical equation. Ultimately, it’s easy, but in a completely different way. It is easy to take, live and express with yourself. It is not easy to press it into a form, an equation, a formula. She will always escape and appear with a different face because she is as diverse and colorful and comprehensive as life itself, which we can never quite grasp.”

„Like life itself in becoming and passing away. ‘A child was born to us,’ it is said, a child who was not there before, and who is suddenly,“ Mary said thoughtfully, „A child, a living being who is just going to fulfill that life that just has it and brings. It does not think about it, on the contrary, it tears it apart, with all elemental force, with all naturalness, which shows how completely unencumbered it is with defaults and opinions. Because it is easy. It is this basic trust that needs no explanation and no justification. Trust in yourself and the environment. We embrace this child, this new life, because it is there, hopefully, accepting it and entrusting it to this assumption. There is no reason for it. It does not need either, it is the rationale itself. Trusting in yourself that I can fill this life with me because I can. Trust in others that I am holded and accepted because it is. Nothing else. Without contract. Without clause. Only later will this trust be questioned when we meet people who work against liveliness. We say that we are disappointed, deceived, betrayed, but the real message is that this human being limits life to its liveliness and converts the obviousness of the assumption into exclusion. “
„To celebrate the tendency to live in the form of love. You, as the one whom I can embrace, that embraces and carries, and holds and protects me. Me for you. You for me. Without restriction. Without regimentation. Without recuperation,“ Jesus continued, „Where I limit, regulate, conquest, I choke the love. ‚You belong to me‘, it should mean. But there is nothing left of love. It is also the moment when jealousy comes to fruition. Jealous, I defend my possessions, dead, empty, hollow possessions. Nothing and no one else can touch, expand. So, I suffocate the other, slowly but surely, in the seclusion of his solitary confinement and thus my own relationship. “
„I believe in you, I trust in you,“ I added, „faith as a comprehensive form of trust. Not seeing, not recognizing, not understanding, yet trusting, because my trust in life itself is rooted. Roots that go so deep that they can withstand any storm of life and still carry me. It may be that the storm kinks or even breaks one of my branches, but the foundation in that belief he cannot reach will withstand every storm. “
„It is a pity about this belief,“ Maria said thoughtfully, „because it is demanded as mere stupid ignorance. Believe against all better knowledge, against better experience. ‚You have that and believe that‘ is then said, even though my intuition says I cannot believe that, that cannot be right. And this intuition always comes as far as we still have a healthy connection, when we are asked to believe in something that contradicts life. It also happens in the church and in your name. Where it is said that you ought to believe that God finds it right, or even requires you to harm living beings, then you feel that it contradicts life, but if you have enough authority, you will believe it, not because you have confidence in what you demand, but because you believe the one who demands it. Faith against better knowledge is directed against life itself. It is an expression of the one who makes you the tool of his own goals. You are the tool. He directs you. So, you gradually lose your life, and the bondage. “
„Wars, subjugation, oppression in the name of him who, according to the opinion, has created all life is a contradiction in terms. Anyone who listens to his natural intention is aware,“ Jesus said, „No God who is life demands that one living thing harm another, for whatever reason. A God who is life will demand to protect it in every way. Be careful with life. Then love can grow too. Be careful with love. Then life can grow. “
„Like the child in the manger, the message for life and for love,“ I continued, „so Christmas would be nothing more than accepting the child and having with it the life and the love of being touched, as I accept you and Hope and Joy and Sunny and Grace, because it is and because it will be. “

And on the ninth day of Advent, I became aware of the message of Christmas in the complementary of love and life. Meaning is where life is, even at Christmas. An impetus for love and life. In that sense, every day should be Christmas, every day a celebration of life and love.