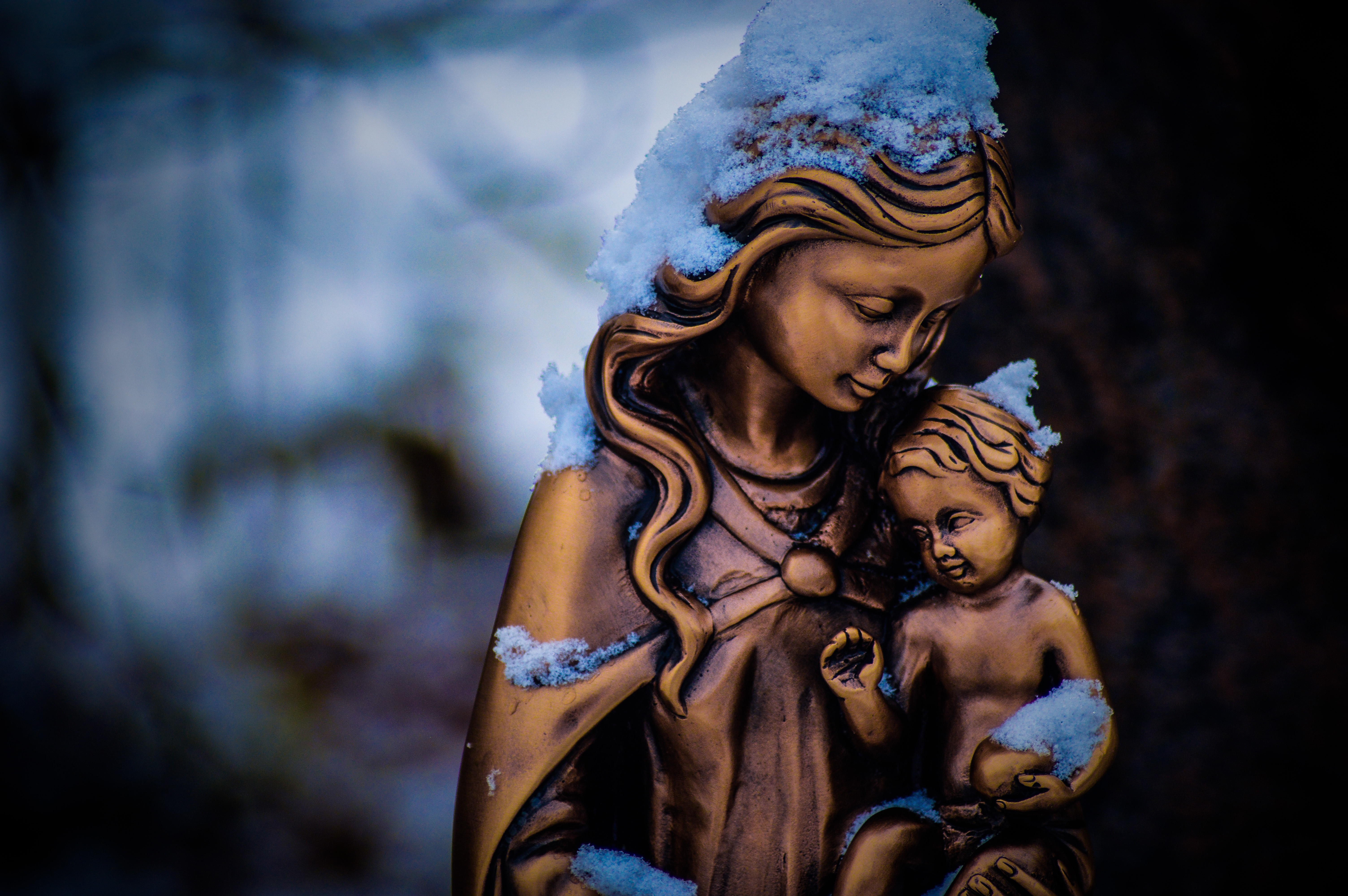 „What are you thinking about?“, Mary asked me, as she handed me a cup of tea and sat with her to me in front of the fireplace.
„How can you really celebrate Christmas, the feast of life for all, with a woman in the center and at the same time telling her she’s not worth anything?“ I summarized my thoughts, „How can you celebrate Christmas at all, if half of humanity is still seen as a second class and still celebrates it? How can it be that you put one man above the other because of merely random characteristics? “
„You know that I’ve never shirked something like that,“ Mary said smiling.
„You, you are a strong woman too, and you could afford it,“ I interjected.
„Maybe, but it was hard work to get me into that position,“ she replied. Silently I sat there and waited for her to repeat.

„At that time, as a woman, I did not have many opportunities to earn my own income without being dependent on a man,“ she continued, „Yes, I could have married well, but that’s exactly what I did not want. Then I would be a decent woman, but for the rest of my life I was dependent on the will of my husband. That’s why I was left with the service. “
„So, you were actually a courtesan?“ I could not refrain from interjecting.
„Well, let’s just say, I’ve been entertaining the men and getting my starting capital,“ she said flatly, „If I’d had another option, I’d have done it differently, but there was none. Actually, an interesting situation. Once a woman is denied any access to her own money, once one takes out the subjection, and even then, it is not certain that the husband is willing to give money to the fiancée and not just keep her as a cheap whore, any access except the one, and if you claim it, you will be ostracized. “
„That’s the reason. That stops many from going that route,“ I said.
„Better ostracized than dependent. Especially as I realized very quickly that I was a bad person in the eyes of the moral apostle, but my business partners did not care much. There were other criteria,“ she mused, „and so I could support Jesus, him, and his cronies. It’s a great feeling to be able to decide about yourself and your life. I gladly accepted all the difficulties and would never do it differently.“
„There you are but one among a few,“ I said, thinking of how many women there were, who gladly renounced freedom and self-determination for comfort and good reputation, to be mistresses, who, from time to time, mucked it she imagined that she had her own opinion, but otherwise enjoyed the benefits of dependent but secure living. But what is for sure? For this they even accept to be constantly cheated and lied to. As long as they do not know about it. And once you learn something, then the good mood can easily be bought back with a small gift that will continue as before. Main thing decent and moral integrity. And it is also at Christmas. The women have all the work and the men benefit. As always. For that woman is then praised. If she’s lucky. Mostly nothing is said or criticized, if anything does not fit. That if they do something well, it goes without saying and if it does not go so well, then they get the buck. How easy can you do it? “
„The question is, why are you bringing this along,“ Mary interjected, „but I think it’s your mother’s fault for all the misery.“ She turned to Jesus, who was coming in with a load of firewood.
„What is my mother to blame for?“ he asked confused.
„At the oppression of the woman in the church,“ Mary replied blithely.
„How am I allowed to understand that?“ he said as he piled the wood next to the fireplace to sit down next to us.

„Your mother and her noble virginity,“ Maria commented, feeling like they were not talking about it for the first time.
„Of course, she was a virgin, before, during, and after the birth,“ Jesus smirked in, „but seriously. My mother was a great, if simple, woman. She has always stood by me, no matter what I did. Even if she did not always understand … “
„She almost never understood it,“ Mary interjected, „Remember how many times she came to me to explain what you’re doing.“
„That’s right,“ Jesus agreed, „but despite everything, she simply had confidence in me. After all, she had raised me and done everything she could. But that with virginity, that has never played a role. That did not even stand in the original text. It had just been from a young woman. Apart from the fact that it goes beyond the heart of the matter, namely that God leaves the people to their decision. She could have said no. This freedom of choice was the focus. And it should still be. No matter if man or woman, regardless of the social class, everyone can decide freely. But that was quickly swept under the carpet, because free choice sounds as bad as anarchy. Where would we go if everyone could decide freely? Everyone thinks and acts accordingly? But to balance something else had to be found, something that distracts people from the thought of that freedom and focuses on something else. That’s why the young woman quickly became a virgin. By doing so, two birds were killed in one go – in the truest sense of the word. The distraction worked out and suddenly there was a good woman, one who has no sexual needs. This ideal image of the woman who knows nothing but the sacrifice for others, without expressing her own wishes, just waiting for the others, the men, to express them to her, so that she can think as quickly as possible and without thinking about them could be fulfilled, was stylized to the ideal image of the woman. Thus, the women quarreled and quarrel until today. This was and is rubbed under their noses until today. It is so disgusting, because it does nothing more than to cement the man’s rule as well and extensively as possible. Thus, any joy of life from the church, was banished from life. No woman who has children can match this ideal. She will always be inferior. Strange only that this is not required of the men. Which immediately reveals the next ulterior motive. It’s about the rule, the rule of the offspring. It’s all a politics, as so often. My mother was and is instrumentalized for it. She said it often enough, but it was hushed up. Like so much else. She was declared a saint by flight, and that was all good. Nobody but you listened. “
„That’s not true,“ Mary intervened again into the conversation, „I’ve always listened to her. And all who knew her well. Only availed it has nothing. The official statement should look different. And until she was put on paper, we were long dead. That was very clever threaded. There was no one left who could say anything about it, no one who could put it right. “
„Could you behave loveless?“ I asked, right into the still-lasting bitterness.
„No, nowhere could be further from the love of you, than where it is a part of humanity under guardianship and supervision and compulsion,“ Jesus declared, „Nowhere you could be away from the more I wanted to close bring people. But what does my message have to do with the Christian?“
„Abused and betrayed. That’s what people make of it, „I said thoughtfully, and again felt a step further from the meaning of Christmas. But I did not want to give up yet. Maybe I would still find a way back, on this second day in Advent. Inexorably the day of the festival came closer. Would I still find something that would save Christmas and its meaningfulness? And because it did not rain for once, we climbed one of the peaks of the Wicklow Mountains. Wide and open, the land lay around us, peaceful and quiet. Maybe it was. It was definitely a moment of breather.