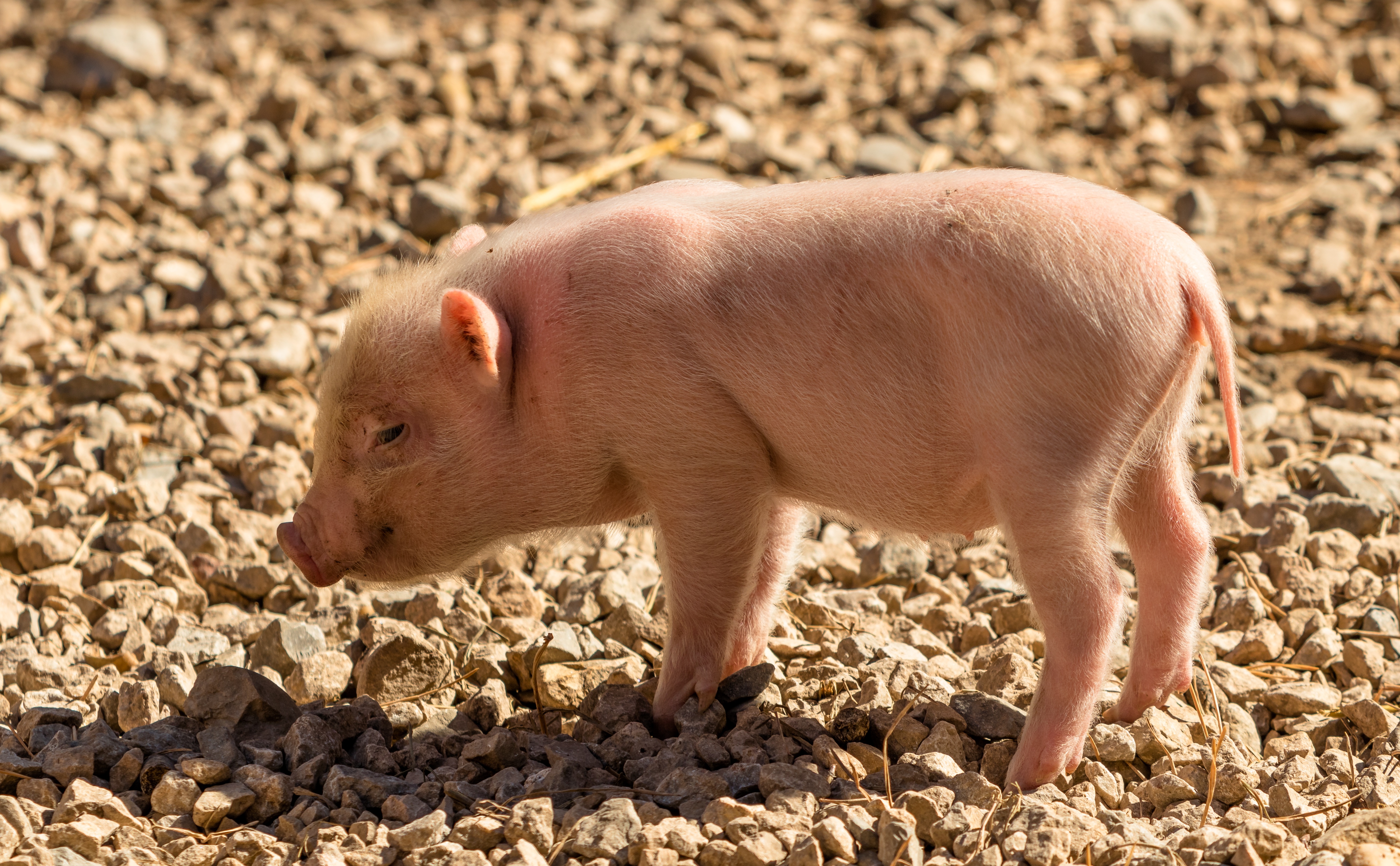 There they stood, at the main square of a small village, a pig on a leash and one in a basket, while the passers-by made a noticeably large arc around them. The stranger dismissed Pippa’s thought by simply introducing herself
„I’m Zoe,“ she said shortly, „Zoe Artist. I live on the farm at the Vegan Hotel. And the little cheeky on the leash is Liv. „
„I know,“ Pippa replied, considering Zoe, after all she had heard, as a heroine, „I mean, I’ve heard of you.“
„I can imagine that,“ said Zoe with a wink, „And you are?“
„Pippa,“ she replied shortly, „Pippa Wehling. And that’s Nanna.“ And with that she pointed to the basket in her hand.
„What about Nanna?“ Zoe asked as she looked into the basket Nanna had taken in the meantime, peering curiously over the edge.
„She was born two days ago and was the weakest in the farrow,“ Pippa said, recalling the first anxious hours in her little friend’s life, „A cowling is well known in the jargon. She was even too weak to drink. But now she’s over the hill, said Dr. Wagenscheidt, and you can see it too.“
„Great. That made you great,“ said Zoe, and turning to Nanna, „And you too, you little fighter. Quite her mythological namesake.“
„You are familiar with Nordic mythology?“ Pippa asked in astonishment.
„Not really,“ Zoe had to admit, „but one or the other stays hanging.“
„In nature such a caring would have been killed. This is called natural selection. But the romantic Bambistroker always have to mess things up,“ came a deep, somewhat illuminated voice next to them.
„Doubtless,“ Zoe replied, „In nature, she would have died. But when we take non-human creatures into our custody they are no longer wild animals but roommates and have the right to the best possible care. And where you hunters rage, there can be no talk of nature anyway.“
„We are the only ones who care about nature and the forest. Otherwise there would be no more trees because of the damage of the deer and all fields would be bald eaten by the damned wild sows. But you would scream beautifully when the critters suddenly stand in your front gardens and dig up the onions,“ replied Hermann Widerlich, hunter and butcher.
„Having destroyed all the predators, that’s no wonder. If Wolf and Lynx were resident, that would be done by itself,“ Zoe said unperturbed.
„Again, one of those who talk big and have no idea,“ the addressee replied, „hunting opponents and high-altitude demolitions, militant, terrorist animal rights activists. We don’t need anything like that here, I’ll tell you. Sneak back to where you came from, to your Schicki Micki scene. We still have values ​​and traditions. You have no idea about that.“ Spoke, and gave neither Zoe nor Pippa the opportunity to say anything.

„What a weird man,“ Pippa said, shaking her head and able to stop Nanna just at the last moment, as she was about to jump out of the basket. Therefore, Pippa canceled both, lifted Nanna out, so that she and Liv could meet and get to know each other.
„How is it, do you want to visit me?“, Zoe asked.
„Very much,“ replied Pippa, who still had so many questions.
„How about tomorrow afternoon?“, Zoe clarified her invitation.
„Perfect,“ Pippa agreed.
„And take cake-hunger,“ Zoe said, breaking their paths. Pippa went straight home. Pippa’s mother was standing in the kitchen, cooking. Pippa was about to report the events of the day when Leo came in with a plaster on his leg.

„What happened to you?“ Sophie asked, startled as she urged Leo to sit down.
„Just a broken lower leg bone,“ Leo explained lightly, „But Ralph’s dad wants to sue me now. And I do not know what to do. „
„Can you please tell me what happened, please?“ Sophie demanded, whereupon the girls recited the events of the morning.
„If I understood that correctly, Ralph wanted to kick little Nanna and you jumped in, so you both have broken bones now?“ Sophie summarized.
„Something like that,“ Leo said uncertainly.
„And for being committed to another creature, shall you be sued now?“ Sophie continued.
„Something like that,“ repeated Leo, more irritated.
„Well, I’ll tell something to the gentleman!“, Sophie said, „He should not believe, just because he’s a lawyer, he can act like that!“
„What do you have before Mama?“ Pippa asked, as her mother took off her apron, put on her shoes and started to leave the house.
„I’ll fix that. Just let me do it, „Sophie replied curtly and left.