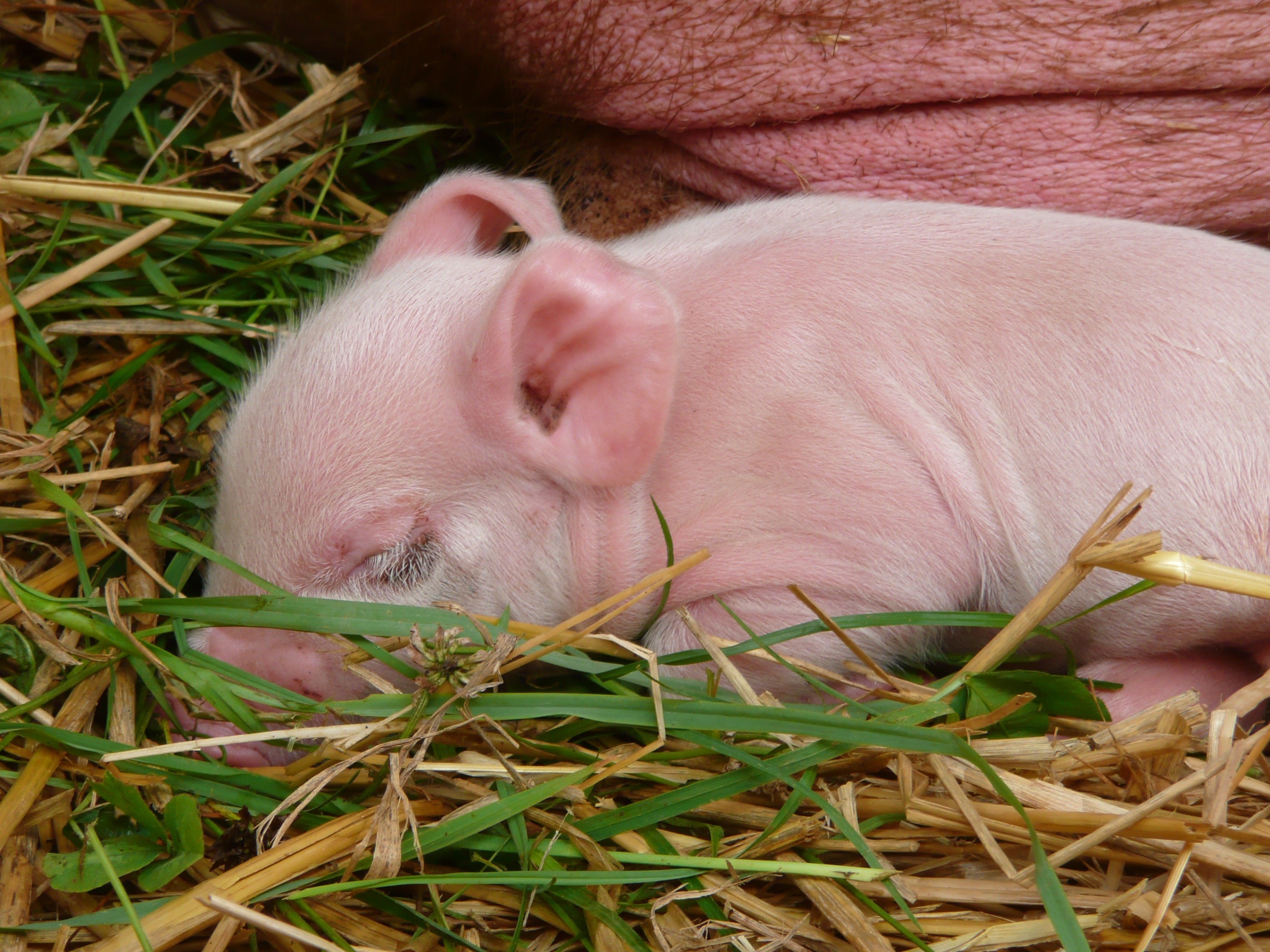 As fast as they could and as gentle to the little pig as possible, they ran to the veterinarian’s house. Leopold Wagenscheidt. His ordination was in the main square of the village, on the ground floor of a jovial Biedermeier house that somehow seemed to have lost its way into the village. His apartment was on the first floor. A quick glance at the chalkboard at the entrance confirmed that they had come outside the regular ordination second.
„What are we going to do now?“ Pippa asked, feeling discouraged.
„Still ring. The little one cannot wait,“ Leo resolutely decided, and a quick glance at the bundle in Pippa’s arms confirmed that. But there was no turning back, for Leo was already ringing.

„What do you want here?“, the girls were especially friendly greeted by a portly-looking woman with an apron.
„We absolutely must go to the doctor,“ Leo explained, unmoved by the sound or the gaze that seemed to shoot arrows at her.
„What is it?“ asked the woman in which Pippa recognized the doctor’s wife.
„My piglet is dying,“ Pippa said only briefly.
„Then come to the office hours,“ was the pitiless answer. Frau Wagenscheidt wanted to close the door again, but then Leo got in the way, who had probably recognized the intention and put his foot in between.
„Did not you hear what my girlfriend said? The little girl dies and desperately needs medical help,“ she said, so loud that it probably had to hear all the neighbors.
„The doctor is just eating, and I’m sure I will not get him because of something,“ the spouse of the doctor replied unmoved.
„Why do not you fetch me from the food?“, a sonorous voice from the background came to them.
„These intrusive brats seriously want you to make your food cold because of a piglet,“ the addressee said. Meanwhile, the doctor had opened the door and looked at the little one.
„You can warm up food, but bring the dead to life, you cannot,“ the doctor said succinctly. He pushed his wife aside and the girls and the baby into the surgery.
„But everyone can come here and anyway …“, they still heard in the background, but Dr. Wagenscheidt just closed the door.
„Now let me take a look at the little girl,“ he told the girls. Cautiously Pippa laid her bundle at the treatment table, revealing a small life that seemed too weak to go on living but too much to give up.
„What is her name?“ the doctor asked.
„Nanna,“ Pippa responded as if she had fallen for the goddess of Norse mythology, and she wished that the little one was equally daring.
„Well, your little Nanna is really very weak. In jargon, this is called a caraway. In livestock farming, they are disposed of. You can never tell how they develop,“ the doctor explained expertly, while the girls‘ eyes kept getting bigger with fear, worry, „but of course I’ll do what I can. I give her precautionary antibiotics and a nutrient solution. You have to come back the next few days and pick up a syringe. If she still died, she was actually too weak. I’m just saying that you do not blame yourself. Nobody can know it. We will see.“
„Thank you, Doctor,“ Pippa said, struggling to hold back the tears.
„If she gets up, you can try to feed her. Do you have a vial at home?” the doctor asked.
„No, I do not think so,“ Pippa answered, her courage beginning to sink.
„Then I’ll give you one and the right baby milk. It works like baby milk substitutes on human babies,“ the doctor explained as he collected everything and put Leo in her hand, „We’ll know more in a few hours. And if she survives the night, then we’ll see each other tomorrow.“ He escorted the two girls out.

„Do you think she will?“ Pippa asked quietly as they made their way home.
„You will not be discouraged by such predictions?“ Leo said energetically, „The little one will live and, in a few days, already hopping around in the meadow.“
„Do you really believe that or do you just want to calm me down?“ Pippa asked.
„Yes, I believe that,“ Leo said seriously.

Once in Pippa’s room, they sat down on the couch. There was nothing left for them to do but wait and see. Would she ever wake up again? Or would she fall asleep forever?