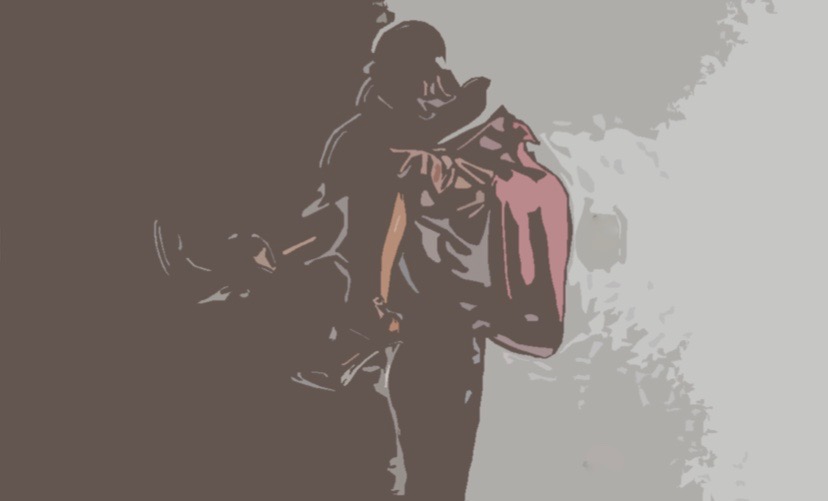 People are coming. People go. That’s the way it is in life. She had to experience it so often. She would witness it so often. By now she had learned to handle it. Also, for her own protection. You meet. One separates. But you should never look back. What’s over is over. There is no point in sticking to it, otherwise you cannot continue. Waste of lifetime. It does not make anything better, but much worse, some even impossible. As well as to face the requirements and demands of life that come after that. The world does not go down. Not even a tiny bit of it.
She kept telling herself all that, while she did not look back, as she had said, after saying goodbye to him. With a smile and the best wishes. That was not how it was said. That was actually meant that way. Of course, they had often said goodbye to each other, but this time it was different. It was one forever. Nobody had mentioned it. At first she had only guessed. And when she looked him in the eye, she knew that it was true. There was no doubt. You did not have to talk about it. That was how she had left, intent on making her walk as swift as possible, as far as it was necessary. Then all the strength seemed to leave her. How remotely she went home. There was a lot to do. There is always a lot to do. It automatically went off. It was good to move, but it was as if she no longer felt herself. As much as she had decided that she would never be so deeply touched by a human, it had gone so wrong. As if you could do such things. She tried to reprimand her inconsistency, even scold her, it did not help, it was as if some of her own had just left, and where that part was missing there was an open wound that hurt. While she stood in her kitchen and cleared away. And yet everything was so present. His scent. His voice.

„Hey!“, His voice said in her head, and for a moment she closed her eyes, letting the voice resonate in her head and let his smell sink in, but when she suddenly turned around, there was the scent and the voice and all the rest of him, and she had to put her hand on his cheek, that she believed, and then her senses faded, with joy. Skillfully he caught her and carried her on his strong arms on the bed, sat down beside her and waited patiently until she came to herself again. He had not forgotten that she always forgot to close the apartment door.

When she opened her eyes, he was there. It was not a dream but a reality. Involuntarily, she embraced him with her arms and pulled him close so she could bury her nose in the pit beside his neck. He smelled so good.
„What was going on?“ He asked softly with his own compassionate interest as he tried to gently push her away a bit to be able to look at her when talking to her. But she held on so tightly that he did not succeed, and she dared not look at him.
„I thought you would never come back,“ she admitted.
„How come you on something like that?“ He asked, half irritated, half amused.
„I just knew it, because I’ve already experienced that …“, she tried to explain, and realized at the same moment that it was nonsense, what she said.
„Do you think I actually managed to go away without saying a word?“ He asked.
„I don’t know. Why not? „She replied, out of pure defiance.
„But would it really have been so close to you?“ He went on unperturbed. At last she sat up.
„Of course not!“, She asserted, even though she knew how unconvincing it sounded, „It was only because then I would have had everything I cooked to eat alone.“
„Of course,“ he repeated, pulling her to kiss him. And maybe a little to prevent her from talking into even more nonsense. There were things she would never admit, but for what. He knew it without her even saying it as she hugged and kissed him, the way she could faint for joy.