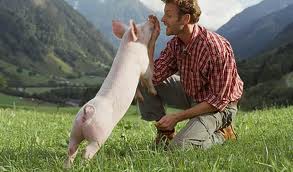 This dialogue between the funny farmer, who secretly reveres the biology teacher, who in turn has more eyes for the wonderful organic products of the farmer, is now an integral part of advertising for the „yes, of course“ line one of the largest food companies in Austria. This little piglet is a wonderful sympathy bearer, as most would not hesitate to call it cute or cute. The connection between a small piglet and a big pig, which it should meanwhile be and which has probably already been eaten long ago, are only a few. Therefore, the dialogue that has been improvised here is not very effective. But it is a fact that I have to kill an animal first if I want to eat its meat. Because no, the hip steak does not fall from the sky and then directly in cellophane, it comes – as the name implies – from the hip of a cow.

Despite the rapid increase in vegetarians, as has been claimed time and again, it is still the case that the vast majority of the population eats meat. To meet this need is killed, every day. However, this killing happens outside of our perceptions and many of us may not be able to kill an animal. Others should do that, because even you want to buy it finished portioned in the supermarket or at the organic farmer, without it being recognizable that there was blood on it. This is common and not a miracle. However, the fact that this killing takes place outside of our perception leads to such questionable situations as the one in which parents were extremely outraged that a teacher killed a rabbit in front of their children, in a grotesque way, such as using a bolt gun the press reported. (Http://diepresse.com/home/bildung/schule/4767175/Emporung-an-AHS_Lehrer-totet-Kaninchen-vor-Schulern?from=rss&#xtor=ERP-20003-[rss-newsletter]

Of course, adolescents should not be confronted with killing, at least not without parental consent. Well, the teacher would have received the consent of the parents also hardly, because you have to finally keep the little ones from the evil killing. In addition, and here I come back to the piglet from the beginning, a rabbit is so sweet and cute. Certainly, the rabbits that are bred for meat production are not sweet. Similarly, there is now a large lobby against the hunt, which does not always disdain the good game board. Likewise, there should be riders who hold their horse like their own child, and yet do amicable on horse liver cheeses. Or those people who hold a domestic pig and call it by name, but the pig’s shanks are not averse.

Whether someone eats meat or not, he should decide that for themselves, but then at least you should be so honest and admit that this meat on the plate to an animal that lived and was killed for consumption. And yes, even the little, sweet, cute piglet from advertising.