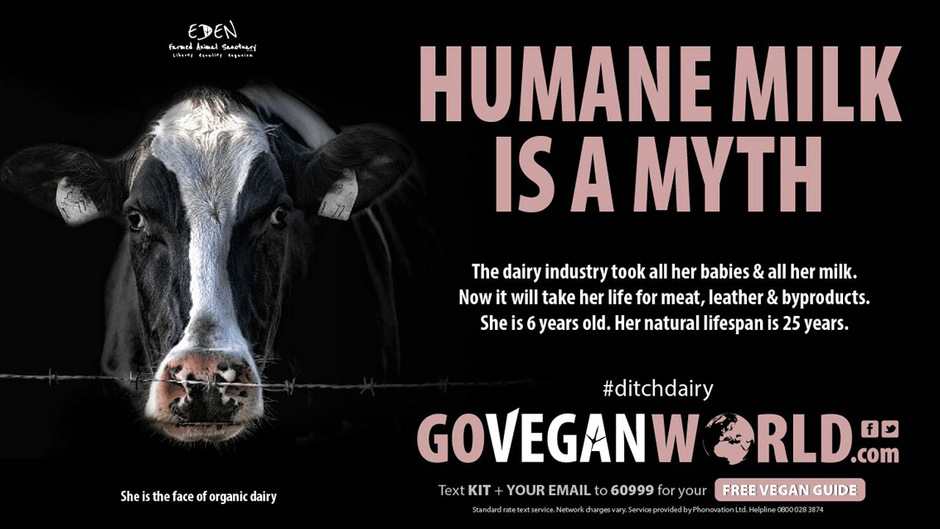 It was a big celebration – and so it was planned. Because when the NÖM celebrates 120 years, then not only everything is brought to entertainment, which is possible, but also unpleasant back votes just muzzled. And that is quite possible in Austria, even in public spaces. But wait, is a public space rented by a company still public space? Obviously not, because it was forbidden to distribute flyers throughout the area.

White milk stains, glued to the floor, either naked or 120 years old, marked this area, where freedom of expression, by the way, a human right and constitution, was suspended for the day, because within this area activists were allowed inside with information material, which would have pointed out the beautiful lying building around the so highly praised udder secretion, not be distributed. After animal rights activists focus on sharing information in an area where fairytale and healing world stories are still sold as the truth.

While children enjoy milking a cow, baby cows are snatched from their mothers immediately after birth and their oversized udders are sucked to the last drop. „The calf comes away from the cow. Well that’s just screaming a week,“ a farmer comments on the obvious, „but it also stops again „. This amuses not only him, but the whole audience, including the children present. And I wonder if we are really dull enough to laugh about the suffering of those creatures who are helpless and vulnerable to us. Beaten, kicked, raped, maltreated and isolated, that is the fate of a so-called livestock in our industry. But you can not talk about that. This has to stay out, so that the snow-white image is not touched. And people who point that out are put off.

But not only that not allowed to be flown, within the healing-world-imagination, it was also a demonstration prohibited, which was registered. The reason given by the authority was that the NÖM itself had registered four pro-milk demos. These were positioned at four critical points, so at the four main entrances to the festival itself. Apart from the fact that it is probably somewhat surprising a table with umbrella and three gentlemen in leather pants, on the table three information booklets, along with notebooks for children, rest to describe as a demo, it became very clear here how the new legal situation is abused to move away unpleasant voices as far as possible from themselves.

The new assembly law stipulates that between two demos 50 to 150 meters distance must be. It depends on the authority, which radius is chosen. In this case, animal rights activists were allowed to walk 150 meters away. Not necessarily unexpected, but amazing how much the authorities play this game. Thus, the counter-demonstration was banished to a place that would have been far from what had happened and was still under constant surveillance by the executive. This became most apparent when an activist in a cow costume, who in turn did nothing more than hand out informational material, was beaten down by five officers and then held for four hours, just long enough for the party to be over.

Nevertheless, it will not be possible to suppress the truth in the long term. Actually, all the use of power games only shows that the dairy industry is seeing its façade crumble more and more and soon collapse. And then even the most beautiful festivals do not help anymore.

But what is so bad about the milk?