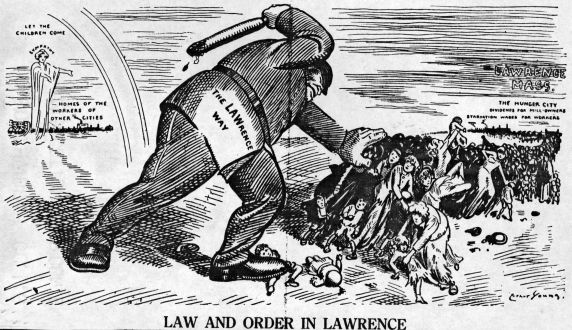 Just a few days after the strike began, the city resembled a battlefield. On the one side stood the workers, who had nothing but their bare lives, for the preservation of which they ultimately fought. Opposite them were the forces of the executive, police, militia and National Guard. As peaceful as the protests of the workers may be, there were always disputes that demanded sacrifices.

For example, a peaceful meeting was held on January 29, 1912. It was organized and held by Joe Etter and Arturo Giovanitti, IWW officials. The National Guard opened fire on those present, several thousand workers. Many people were injured and one was killed. However, it was not the National Guard officials who were arrested for assisting the murder, but the two organizers, and in addition a completely uninvolved one. They remained in detention for ten months. In the process that took place long after the strike, they were acquitted, but three people were detained for months, and they were known to be innocent from the outset.

Other innocent victims of assaults, but who claimed no casualties, were the children who were to be taken by train to New York or Philadelphia. The National Guard tried in part to prevent them from entering the trains. Apparently, the state institutions were all right to destabilize the strikers. For this they only know one means, violence, which is legitimized, with those who practice violence different from those who order it. There is no relation between offender and victim. The executive organs invoke their obedience. This kind of separation of self-responsibility and one’s own thinking can still be found today. If you do not kill yourself, do not get your hands dirty. He who murders because he is commanded acts on behalf of and is merely a tool. Thus, the Holocaust was possible, and is still the shameful treatment of sentient, living beings in the factory or slaughterhouse daily, bloody, degrading reality.

But even after the strike, the repression continued. Thus, those wobblies (members of the IWW) who had excelled during the labor dispute were selectively and dismissed under the most threadbare pretexts. Gradually, the wage increases were partially withdrawn, but also offset by the stronger mechanization and the consequent consolidation of the work.

Still, the Bread and Roses strike was not for nothing. Despite its lesser success, its role as an example for other struggles by migrants, African Americans, migrant workers, woodworkers and other seemingly unorganizable workers‘ groups, such as the AFL (American Federation of Labor), which understood itself primarily as an organization that advocated for White, Anglo-Saxon, male skilled workers, should not be underestimated. It showed that solidarity is possible across the boundaries of nationality, education and gender. As a result, in the following years, the IWW led a series of major struggles, especially in the textile industry, and increasingly managed to extend its organizational base to centralized industries in the East.

In the last century, the world of work has changed a lot, at least in Europe and the US. Regulated working hours, health insurance, unemployment benefits, minimum wages, etc. Last but not least, we owe these labor struggles, achievements that we now take for granted. We like to overlook that in most of the world it does not look that way. The fact that products such as electronics, textiles etc. can be offered so cheaply is due, not least, to the precarious working conditions that prevail in the producing countries and the exploitation of raw materials, which occur primarily in so-called Third World countries. Who buys at Kik, Forever 21, Primark, etc., supports just those exploitative labor relations. But even here, the social achievements begin to crumble. Not least because of the government’s push to reintroduce the 12-hour day or to put every unemployed person under general suspicion that he is too lazy to work. But there is much that happens in secrecy and concerns those who have neither the strength nor the time to organize themselves politically. Precarious working conditions, being pushed out into a pseudo-independence are just as much part of this as are the concealment of the fact that there is less and less work. But most threatening is the successful breaking of solidarity. Individual groups are skillfully played against each other and lose each other in the daily hiccup. Workers against the unemployed, nationals against foreigners, women against men – while we go at each other instead of solidarizing ourselves, they can make policies that serve only one purpose, to make a few in the world, ever richer and corporations over our heads to open the way to take over the rule globally. But a few crumbs will fall for us, at least for those who are good and well-behaved.