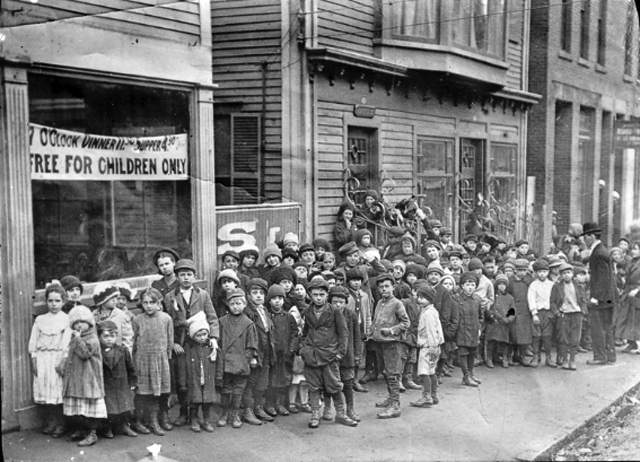 20,000 workers from at least 25 nations took part in this strike, even though it was said that it was not possible, not with workers, not with migrants. But what was set up under the auspices of the IWW (Industrial Workers of the World) has no equal. Thus, a 60-member strike committee was formed in which the 15 most popular nationalities each had four members. In addition, deputies were appointed to remain able to work in the event of a wave of arrests. This committee served to coordinate the actions and to help the workers‘ demands for a substantial wage increase. The demands could not be overstated. On the one hand, they demanded a reduction in working hours to 54 hours per week and a wage increase of 15%. Taking into account that the hourly wage averaged 16 cents, this means an increase of 2.4 cents per hour. In addition there was the demand for a double hourly wage in overtime. In addition, the increases in the yields of the manufacturers are not disregarded (see Part 4). But even to achieve that, such an extensive strike was necessary.

The 60-member committee met regularly for exchange. The individual ambassadors of different nationalities were responsible for their people. They were provided with votes and work assignments, which were discussed at the daily public meetings of the strike committee. To make sure that everyone was able to follow the discussion, they were translated into 25 languages.

In total, the strike lasted nine weeks, during which time 335 workers were arrested and 320 were sentenced to fines and imprisonment. Now, of course, the question arises, how it was possible, without pay and protection, to survive these nine weeks economically, how the care of the children was ensured or medical care.

A wave of solidarity and helpfulness

Despite all the negative signs, many sympathizers and supporters found themselves scattered throughout the country for the labor dispute in Lawrence. And contrary to many of today’s experience, it was not verbal protestations, but they found tangible rainfall. For example, a local Belgian bakery provided bread to 20,000 workers for weeks at a time. The IWW, whose officials were traveling around the country, raised well over $ 74,000 in donations for the strike. Soup kitchens were opened, and many doctors responded to Lawrence’s call for free medical care for the people, the strikers and their families. In addition, several hundred children of textile workers were housed for the duration of the strike among members and supporters of the IWW, the Socialist Party and other organizations in New York City and Philadelphia. The children were taken care of and the parents were relieved.

At last, on March 13, 1912, the employer introduced a wage increase of between 15% and 21%, differentiated according to wage groups, as well as the introduction of overtime bonuses. This offer was accepted.

The workers had fought a long, hard fight. It became clear that solidarity and communion can do a lot, so that the bread was won, and the roses:

Bread and roses
As we go marching, marching, in the beauty of the day

Are touched with all the radiance that a sudden sun discloses

As we come marching, marching, we battle too, for men

For they are women’s children and we mother them again

Our days shall not be sweated from birth until life closes

Hearts starve as well as bodies, give us bread, but give us roses

Go crying through our singing their ancient call for bread

Small art and love and beauty their trudging spirits knew

Yes, it is bread we. fight for, but we fight for roses, too

As we go marching, marching, we bring the greater days

No more the drudge and idler, ten that toil where one reposes

But a sharing of life’s glories, bread and roses, bread and roses
https://www.youtube.com/watch?v=yaWmG-vQTGw
In retrospect, after winning the fight, everything seems simple and obvious. But was that really, and what was left of it? Did life just go on forever? Did the gentlemen of the factories simply accept this attack on their authority and sovereignty?