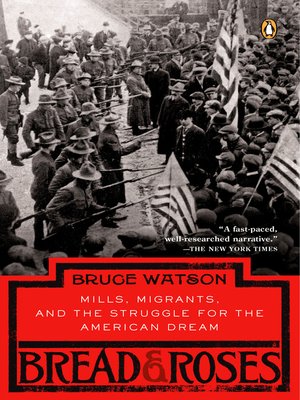 Workers who were actually in the same boat, suffered the same hardships and were exposed to the same conditions, did not seem to realize that the internal divisions led to the failure to work together for change. All the more remarkable are the occurrences which, seemingly inexorably, took their course on January 11, 1912, as if suddenly a dam had broken, which had stood up so long. As so often, it was probably the famous one drop that made the difference.

However, this drop did not come from the calculations made by Wisconsin Socialist Party congressman John Berger in 1909, who concluded that the share of wage payments in the textile industry in 1890 was just 22% of 164,6 million dollars. By 1905, revenues had risen to $ 212.7 million, while wages had fallen to 19.5%. But such calculations and the resulting discrepancies did not reach the workers struggling to survive on a daily basis against malnutrition and misery.

On the other hand, the capitalists began to realize that the exhaustion of their workers could not be in their favor. After all, these were necessary resources, such as machines that can only deliver their full potential if they are regularly maintained. Therefore, on 1 January 1912, the statutory weekly working hours were limited to 54 weekly hours, but with the same salary. This innovation was abruptly realized by the workers of the textile industry with the delivery of their weekly wages on January 11, 1912, as they could immediately see that survival would not be enough. Pay for six hours could decide about life or death. Women who had just been through their children knew they would starve even more than before. Spontaneously they stopped work and called for a strike. This call was followed by 2,000 workers from all 12 textile mills. This was the prelude to a strike that became one of the most emblematic in the history of the US labor movement, and one of the most spectacular industrial workers of the world (IWW whose members were also called wobblies), refuting the view of the conservative trade unions, women and migrants could not be unionized.

„Better to starve fighting than to starve working“
On January 12, 1912, several thousand workers, waving the Italian and American flags, stormed all textile factories in Lawrence and paralyzed the work processes. They started with the Washington Mill, went to the Wood Mill and the Ayer Mill, where they joined another 2,000 workers. At the Duck Mills they were pushed back by a massive police force, as well as the Pacific and the Prospect Mill. However, they could not do more than prevent the destruction of the machines. By Saturday night, January 13, 1912, the number of striking workers had grown to 20,000, and Monday afternoon saw the city resemble an army camp, as police and militia forces from across the state of Massachusetts had been gathered during those three days. The governor also responded by proclaiming martial law in Lawrence. This included the ban on public meetings. Once again, the forces of the executive have been increased. The National Guard was added to the police and militia. These defenses against starving, exploited humans cost the state $ 4,000 a day. The reaction of the strikers was unmistakable. They ignored the instructions and held free-speech meetings. In addition, as of Monday, January 15, 1912, there were permanent pickets and blockades in the factories, including to deny access to those who boycotted the strike. In it, the willingness of the workers to risk everything, even against an overpowering state power, to improve the literal pittance. Around 20,000 people were permanently on strike, one third of the 60,000 people employed in the textile industry in Lawrence. The demonstrations each had 3,000 to 10,000 participants.

That Friday, January 12, 1912, was the prelude to a strike that would last nine weeks. That was only possible because a wave of solidarity and helpfulness spread, defying adversity.