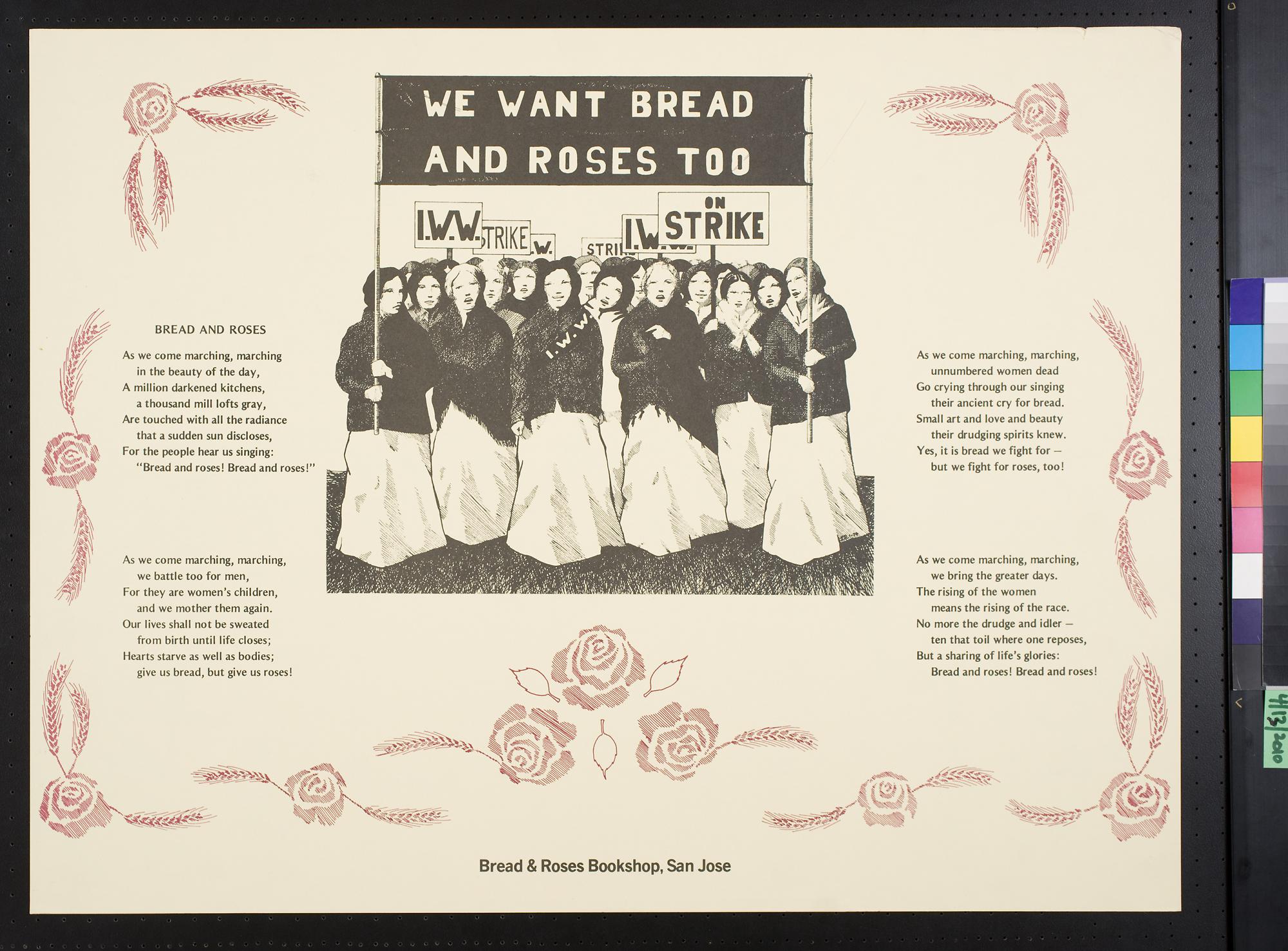 This sentence, which then found its way into a poem by James Oppenheim as „Bread and Roses,“ came from a speech by New York trade unionist Rose Schneidermann, which she delivered during a textile workers‘ strike called the Lawrence Strike in the History, as an example of overcoming profound trenches, between races, genders and social groups. In a situation in which a known order had just set, from which one took ideal ideas into the new, in which they are no longer consistent. But it also stands for the power of solidarity and togetherness that can move so much. In the course of the research, it became apparent that this so-called woman’s song, now part of the International Trade Union and Women’s Movement, set to music for the first time in 1976 by Mimi Farina, should still serve as a call and admonition not to be played off against each other and to advocate common goals can only be achieved if you pull together with each other. But to understand that, one has to know about the events that officially started on January 12, 1912, in Lawrence, Massachusetts, and became the most emblematic in the history of the US labor movement.

What was in front of the machines?

We’ve gotten used to leaving the house to do some gainful work, visiting a factory, office, department, or other institution to spend about eight hours of his day there, and then going home. Even though it is no longer uncommon to be able to do all sorts of activities that used to be done abroad at home just as well, often referred to as „home office“. Nevertheless, one usually thinks of paid work outside the home in regular work, otherwise it would not be possible to explain why one feels compelled to justify to the neighbor why the car is still in front of the house on a Tuesday at 10.00 o’clock in the morning. This separation of work and life is so natural to us that we are convinced that it has always been and always will be. The human imagination is too often limited by its own reality of life. It was exactly the opposite. Most of history was dominated by closed housekeeping, and still predominates in predominantly agrarian societies, where the place of production, consumption, and livelihood was one and the same place. But that also meant a certain independence. Even so-called small cattle farmers had in most cases a small piece of land, which enabled them to survive by growing vegetables, potatoes, etc. Servants and maids were involved in the family association, as were apprentices and journeymen in the household of the master for whom they worked. Agricultural and manual skills were necessary to produce things. Until the so-called Industrial Revolution, society was agrarian. We are accustomed to associate these with the invention of the assembly line or the machines or to see them as their salient feature. However, that alone could not have been, because in order to release enough manpower for the newly emerging production processes, two other developments were decisive. On the one hand, there was a modernization of agriculture, which now required less labor, while increasing yields. On the other hand, infant mortality decreased significantly.

The substitutability of humans

Thousands of people flocked from the countryside to the cities in search of work. The oversupply of workers pushed wages, because if someone refused to work under the given conditions, someone else found himself. In addition, women and children were paid less than men. Just like today, women earned about a third less, which led them to see them as cheap dirt contests that dispelled their jobs. This even went so far that the trade unions refused to defend their interests, and that was by no means confined to the conservative forces, but was also a creed within the proletarian circles, for the ideal image of the woman was opposed to that of the housewife and mother of all economic necessity and reason, for a working-class family could only survive if everyone who could work did so. Ideal and reality gaped farther and farther apart. In 1912, as in 2012. Was the worker also immigrant, she met with further discrimination. 1912 as well as 2012.