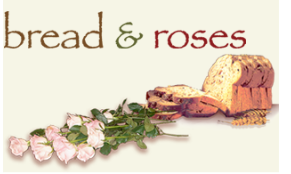 Many of my stories have a personal, private approach. Be it an experience, a narration or an encounter. It’s the inspirational spark that’s at stake. Usually, I leave this away or it stays with me, so that the story stands for itself. It’s all about giving readers the freedom to read the story the way they read it, with their personal background, their own approach. As soon as I pass on my interpretation, I stifle that freedom, letting thoughts run in a certain direction. But in this series of stories, I usually want to give it up exceptionally, as this is of particular importance to me.

There is always an encounter in the beginning

The starting point for development, change or reflection in life is usually – in my experience – an encounter. Encounters happen in the most varied forms. With living beings, but also with pictures, books, messages or – as it happened in this case – with a song. „Bread and Roses“, presented as a woman’s song and discovered for me at political singing in Albert’s bookstore  ​​organized monthly by Chris 4er Peterka. It appealed to me, at first purely intuitively, because there are words that have a meaning that goes far beyond the designated thing. You could also call them symbolic or metaphernally suitable. Both bread and roses are part of it, as what human beings needs to survive, combined with what goes beyond mere survival.

Bread is – at least in our latitudes – a staple food. It is enough to get full for a while. That is precisely why it also has a far-reaching significance. It also stands for hospitality and togetherness. That which lays the foundation of life becomes in sharing for the foundation of community. However, it is also a sign of repression and oppression because those who have the power to give bread, even those have to withhold it. Therefore, the clear demand for what should actually be self-evident in a community, which ensures the bare, rare survival. Even without „singing the song“ is entitled to bread. Meanwhile, the right to staple food has been included in the UN Human Rights Charter. Pretty to read and nice to tell, as well as other fairy tales read pretty and tell nicely. And it’s always a fairy tale, as long as the world community or its political leaders consider it legitimate that staples of neo-liberal economic slavery are left to cynically accept millions of people starving every day. Although there is enough bread for everyone. And if bread does not exist, why ask for roses?

Especially as the word roses in our latitudes, where most of us live warm, full and drained, is above all the nostalgic, romantic idea of ​​a symbol of love that is associated with pain. Those who fight for survival do not need roses, in the sense of unnecessary luxury. This kind of preprocessed know-it-be tempts us to pretend to those who do not have the privilege of calculating what they spend their money unnecessarily on, while unpacking the third I-phone in the same year and thinking about a cheap vacation on the Maldives. It is only too tempting to be used to a paternalistic system from childhood on, which apparently gives us the right to judge others. The roses here stand for more than what one needs for a bare survival, for decent working conditions, for time for social coexistence, a place for retreat, for light and color in a dull, gray everyday life, but also for security and education.

Not even this, admittedly pretty, small symbolism would not justify a detailed argument and I would not tell about it, but as the research revealed, it stands behind a simple song with just 16 lines, a strike that was capable of discriminating, misogyny, To overcome xenophobia, led to overarching solidarity, so that common goals were achieved. Unfortunately, but also for the experience of how quickly all these positive aspects are lost again.