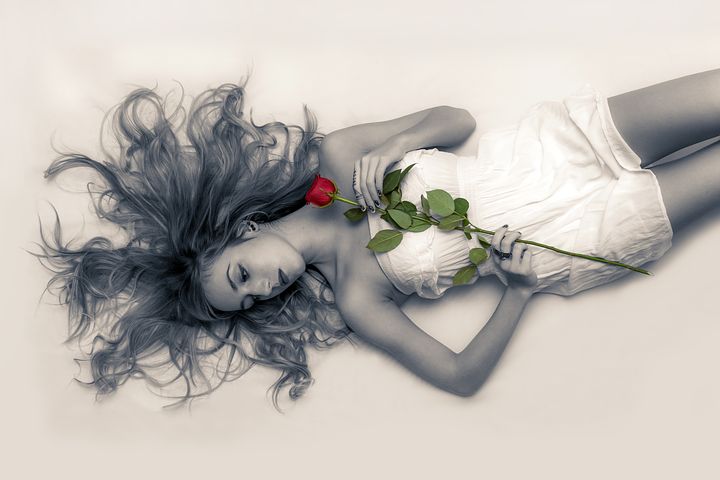 Tobias was one of those men the women did not seem to know were men at all. He was a confidant, soul comforter, helper in distress, but none could apparently imagine him as a lover or partner. They came to him when they needed something.
„Tobilein“, they said then, because it had become natural, and alone this speech already showed how the relationship was, „You are my best friend. You understand me. I’m so glad you exist.“
They talked like that, but when it came to love, they melted away at the sight of all these machos. Sure, that ended up in heartsickness again. And who was back on the spot? The good Tobias, their Tobilein. That had to change, he decided. But how? After all, you do not transform yourself overnight or at any time into a daredevil. The desire became particularly virulent when he met Claire.

Claire was tall, slender, wearing long, brown hair that reached her hips. The chestnut eyes made her look gentle, soft, and vulnerable. When Tobias met her, he decided that he must save her from all the bad sex mates who treat a girl so badly. He studiously forgot that the girls were aware of it. Still, they always got involved with these irresponsible types. Tobias was completely mystified that it was so. So far, he was convinced that could not change much. Like the weather, he had to accept it, but in this one special case, it was time to become a savior. Then the women would finally take him seriously as a man. There was only one example to make. But how should he do it? How was he supposed to convince Claire of his qualities? If he waited for fate to offer him such an opportunity, he would have to wait forever. He did not want to wait anymore, not even for a short time. The only way was to help fate a little bit, in the form of a production. But how could this look? He pondered this question for many hours, until Claire, almost casually, told him that she had low blood pressure and therefore easily fainted. Then everything was completely clear. It was almost ridiculously easy. He would invite her to a concert. In the midst of many people, in the sweltering heat, without anything to drink, their circulation would all too soon fall into the basement, fainting them. Then he would stand beside her, catch her and triumph. If she opened her eyes then the first thing she would see was his face. „My Savior,“ she would whisper, falling head over heels in love with him and then telling all her friends what he was after all a guy. So far the theory.

Tobias and Claire actually stood in the middle of a crowd the following evening. The heat was oppressive and he had actually forgotten about drinks. Immediately the first physical symptoms appeared. The cold sweat was on his forehead, everything was spinning in his head, and the next moment it was black with the grace of fainting. The arms were ready to catch the falling body and protect it from a wild impact. Already he saw himself walking away with the sweet load as an elbow hit him in the ribs, causing him to flinch in pain as Claire’s body landed in strong arms instead of in his, leading to a steroid-puffed body, top to bottom included.
„That was not exactly what you had imagined,“ he heard a teasing voice beside him. Tobias turned to the voice, angry with ire, ready to throw one or the other nonsense to the head of the person belonging to the voice or, from him, also everywhere else. But when he saw the bold eyes, the open smile, it was all wiped away.
„Do not worry, I would not even have touched her with the pincers anyway, in your place,“ the stranger said, and he knew right away that she was right. Women who adore such men probably did not deserve it any other way.
„My name is Sophie, by the way,“ she introduced herself.
„Tobias,“ he replied shortly.
„What’s up, we get a beer, Tobias,“ she suggested, and when he went with her, he left behind all the false expectations and the „Tobilein“ behind him.