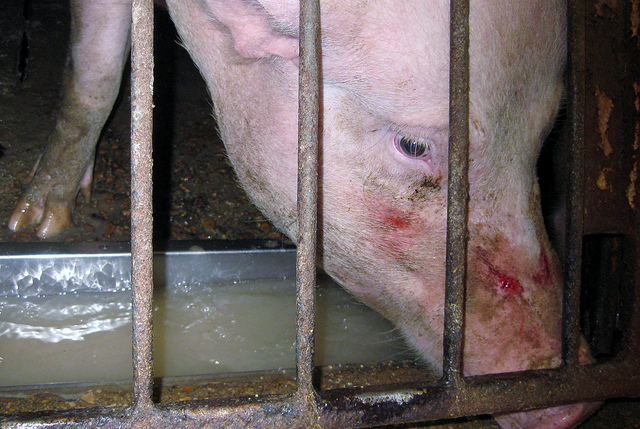 „Water, air and food, and in a way that they do not hurt, of course, have something for themselves,“ said Christian, „But what good is the best water, the cleanest air and the healthiest food, if the business location is bad, the gentlemen would say in business. It’s not yet proven that we need it when we have jobs. „
„Perhaps we should send the gentlemen who agree with this to where there is now scarcely any clean drinking water and usable food,“ Martinique said thoughtfully, „Then whether they still think that way? But if I sit in a dignified estate in Switzerland and lead through my property a fresh, clean stream, then I have easy talk. „

„And in the stables, they stand, close to each other, the so-called livestock. More space means more freedom of movement and more food that you have to give them. In addition, space costs money. Why should I just put a cow, if five have enough space. Just so that they can still lie down. That is enough,“ continued Martinique. „The prices that are paid are decreasing. That’s why you have to save money, in the field, on the feed and on the staff. Living things as mere cost factors. How far can one go that the animal survives? That’s the most important question. „
„We know the conditions, if we want to know them and as long as it is still possible to look at them, without being imprisoned immediately,“ said Christian, „But it was now about the water and the air and healthy food.“
„But it’s directly related to that,“ Martinique replied, „The more animals that live together in the smallest of spaces, the more metabolites they produce. These have to be disposed of somehow. The manure comes to the fields and acidifies the soil. From there, the toxins enter the groundwater, the streams, rivers and the sea. Tons of methane and CO2 escapes from mass depots and pollutes our air, fueling climate change and global warming while providing the animals with tons of medicines, making them the most susceptible to disease. Growth hormones shorten the time between birth and slaughter. Antibiotics and hormones remain in the meat and thus in our food.“
„So that means a reduction in factory farming will lead to cleaner water, better air and better food,“ Christian summed up her thoughts, „making the meat more expensive and a luxury product. As it once was. „
„Eating meat is a sign of prosperity. Everyone should be able to afford meat every day, seems to be the device,“ said Martinique, „Above all, this desires the agricultural lobby, which otherwise cannot get rid of their surplus, and it wishes the pharmaceutical industry, which is good at the consequential damage excessive meat consumption to earn. People need to get sick for the business to thrive. No one is interested in healthy people, because health brings nothing.“
„After all, everyone in the system, the environment, the animals, the people are suffering, and yet we seem to do everything we can to keep it as it is, that nothing will change,“ said Christian, „if I did not know that it’s true, I would think I’m in the middle of a surrealistic movie. But you cannot think of something like that, as absurd as it is.“
„Once you have thought through it, you see the absurdity, the hostility to life,“ replied Martinique, „but very few do. It would be so easy. One would almost say that if common sense were to come to fruition, then something would change very quickly, but it seems to have been affected by the excessive drug abuse already very much.“
„Anyone who campaigns for the freedom of the animals, is committed to the health and freedom of the people,“ said Christian, „Who sits in the middle of the system, but he does not see it, rather means that there is no other way. The pressure of the factual. The need. The solution to the problem is to do more of what caused the problem. You have to let it melt on your tongue in peace and quiet. „
„And while we are destroying globally, on the other hand, we are increasingly referring to the nation state,“ Martinique mused. „Our so-called free market economy is taking the food out of the poorest, completely legal, and without open imperialism, while we are on the close our borders firmly on the other side, so that no one comes in, because they are to blame themselves. We have worked hard for our prosperity.“

„A wealth that would not be possible without cheap labor, without exploitation and cheap raw materials,“ said Christian, „but whoever leaves the cave sees it all, but it’s much nicer to stay tethered and believe that the shadows on the wall are the truth.“