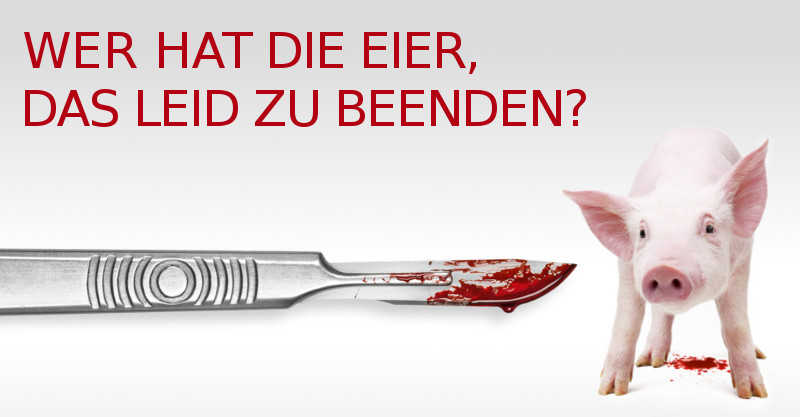 n a world of superfluous suffering, it’s good to be together. Life is suffering. From birth it is present in the form of disease, enemies and death. Nobody can escape that. As much as man tries to protect himself and exclude all uncertainties and imponderables of life, they remain uncontrollable. The suffering is omnipresent. But there is also the suffering that is made by man.

„It’s part of life. Then one cannot do anything „, it is then said,“ In nature it is like that.“ Therefore, man takes the right to increase the suffering. Suddenly he sees himself again as part of nature, even if in all other respects he takes himself out of nature and stands over it, as if it were not only his right, but his duty to shape the earth entrusted to him according to his will, the earth and everything that lives there. But who takes out loses the reference. He becomes unrelated. The easier it is to multiply the suffering without even perceiving it.

„Men are the dishonored sex in our society,“ said Christian, presenting a newspaper article of a very large-format leaf.
„I know nothing about that,“ replied Martinique, „at least as far as the human species are concerned, but in the so-called livestock farming it is certainly so.

Freshly hatched, the little chicks land on the conveyor belt, where trained people, mostly women, sit and sort the fluffy balls. ‘The good in the potty, the bad in the little head’, as the fairy tale already says, the female chicks are allowed to continue, but the males get into the shredder, optionally into the gas. And they are people who send some to death and others to a life of exploitation. After all, 9,000,000 per year in Austria alone.“

„The male calves,“ Christian added, „Nobody needs them. Nobody wants her. At least in our latitudes. For the farmer they are a burden. They do not give milk and do not give birth to calves. And what is economically untenable is waste. So, the calves, who cannot even drink on their own, are transported to vans that they spend thousands of miles crammed together, without food, without water. The suffering of the male calves is immeasurable and hard to bear. In some places, they are also starved to death. Far from any human dwelling that no one can hear, so the screams do not disturb. Everything happens far away so you can say you did not know it. „

„No one ever knows anything,“ Martinique said, „tacitly, except for those who do, as if there were a secret agreement between consumers and producers stating that everything will be bought as long as the suffering stays behind closed doors. Male piglets are still castrated within the first few days of life, without anesthetic, because it is cheaper and the consumer wants to buy cheap meat as if it were a human right. The farmer’s wife takes the baby on her lap, makes two slits in the abdominal wall and cuts off the testicles. The baby screams like a spit, but she does not hear it. Then she can say that the piglet does not feel anything. „

„It is possible to negate the most obvious,“ Christian replied, „and so every day, every hour, every minute, millions of male individuals suffer because their value is measured by what the market dictates. And because it is possible. Always cheaper to produce, more and more to consume, more and more to dispose of. Living waste in a world in which only the calculation counts, nothing else. „

„Suffering is inevitable as long as life is as it is,“ Martinique explained. „But man has – supposedly – the gift of the mind with which he has the opportunity to increase suffering or minimize it as much as possible. If he did the last one, he would do justice to his being a human. „
„And what can you do? How can you prevent it?“ Christian asked.
„You have to make the walls go away and give your eyes on all the machinations that are kept secret as good as possible for a good reason.“
„But so many people on this planet are suffering, too,“ Christian interjected. „Would not it make more sense to care for human suffering first?“