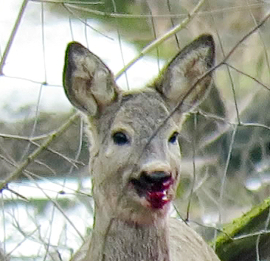 Martinique could not shake off the thought of the little boar girl. Her life had just begun, a happy, auspicious life amidst brothers and sisters, together with her mother and the rest of the family. It would have been fun to find food and browse the forest. The freedom of a wild animal, which belongs to no one, as itself. One should think so. Instead, it was surrounded by fences right from the beginning and had to experience the death of his mother up close. A single shot was enough to destroy her life. Maybe her own death was a salvation.

„What’s up with the fences?“ Christian asked abruptly.
„This will separate the hunting gates, making it even easier to kill,“ Martinique said. „An area is being demarcated, the animals are being fed so that they are particularly strong and carry extra-large trophies. One day the hunters come with their cars in the area, sit on the high seats and wait.“
„So a normal raised stand hunt?“, Christian interjected.
„Not quite,“ argued Martinique, „because in addition to the hunters come a number of beaters, who wrangle the wild animals to the high stands – as the name suggests. The so startled animals try to escape in a panic, but they have no way through the fences. Partially they run desperately against the fence, causing serious injuries, they have no chance. „
„I always thought the hunt was stock management,“ said Christian, „But when I raise wild animals, I create an artificial stock that I then have to regulate.“
„It is very clear that this is a lame excuse that the gentlemen and ladies use for hunting,“ said Martinique, „Incidentally, this type of hunting is only allowed in Salzburg and Lower Austria, and is forbidden in all other federal states. This shows how great the influence of the aristocracy is on politics: in Salzburg, for example, they only exist because the provincial government literally crawls into the ass of Count Mayr Melnhof. This traditionally noble form of murder amusement is only carried out in its hunting gate. Quite apart from the fact that the bred overpopulation suffers severe damage to the forest, but that does not really matter to the well-to-do hunters, it’s all about pleasure and business, and most of them cannot really shoot at it only hours later, if found at all, quite a few succumb to their injuries. „
„I thought the nobility was abolished in Austria?“ Christian asked.
„Officially it is too, but Mr. and Mrs. Austrian are all too attached to their counts and barons, and whatever else is going around, so there will always be,“ said Martinique, „But other than that, I wonder, if anyone has a right to put a wild animal, in a gate, so to hold it in a certain place, lock up and say, that’s mine now.“
„Can one own property of life, that is to say, living beings?“ added Christian, „Being able to take ownership of something legitimate with this thing and to be able to act as you please.“ “That’s no problem with things, because they have no will and no life-plan. But living beings have both, that is, if I purchase property as wild animals, it can only be an original acquisition, as in the acquisition of unclaimed things, but things like that, is a wild animal a thing?“
„Before the law, our fellow creatures are things, so I can acquire ownership of them, treat them as I wish, limited only by a pretty toothless animal welfare law that cannot prevent torment, torture, abuse, rape, or murder.“
„That means the one who owns the land on which the wild animals run around, who automatically owns all the forest dwellers and is allowed to do what he wants, only limited by the respective hunting law,“ Martinique summed up,  “Wild animals still have the possibility to move on, from one area to the next, because the animals don’t care, but so many a capital stag was lost, so you quickly build a fence, and already everything is mine. A so called expertly hunt changes to a launching pleasure.“
„Expertly hunt, is there any at all?“ Christian asked, „Or is it not just an excuse for men and women hunters to somehow justify their perfidious hobby?“
„Let’s take a little trip into the woods and have a look,“ Martinique suggested.