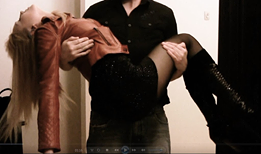 It makes no difference to the conditions, the conditions that became more and more conscious of Martinique, because she allowed herself to lose herself in it, without power and possibilities. What should she do? Where should she start? But most of all, was she the only one who became so conscious of the enslavement of life? Could it be that she was the only one affected? Was it not too obvious not to see it? Without power and influence to change something. Or even just to understand. She did not let go. It was as if her heart and her head were about to burst, but her body kept her from doing so, by releasing her from herself, fainting, not thinking, not feeling anything. Maybe a kind of escape. For a little while.

Christian saw it in her eyes, in her movements, as if he himself was experiencing this ever-faster roller coaster ride in her head, but there was nothing more to do than to be there. Being there for her, catching her and keeping her when it was necessary. That was all. Not much, as he found, and yet the most comprehensive. Would she say. But she did not say anything anymore when she just let herself down because her body gave her no choice and he caught her just because he had a choice. He took her along with him, out of this prison, which was a life with even more prisons. Equality between life in water and on land in apparent inescapability. She didn’t belong there. He had warned her because he had guessed, no, because he had known. It had no relevance, because he had to take her away, to a place where she could bear it, life and everything connected with it. But where could this place be? His gaze rested on her as she lay in his arms, helpless, unconscious. A place of rest and staying. Maybe he could not always fully understand what was going on inside her. He was always very careful with such assumptions, because ultimately no one knew what was going on in the other. Sometimes he did not know it so well for himself. And even if you knew it, could you trust yourself?

Christian felt her lost. That’s why they had found each other. Lost in search of, after what actually? Could it be a place? Could it be a human? Could they be? A human who is for the other a human, or just is? Was that what was meant by a life-person? Just feeling alive and accepted and arrived, or something like that, for a little while, when you’re there? Involuntarily, he tore himself away from her sight, her delicate body resting on his bed, also from the thought. It could not be. It could not be that easy. After a decade-long search, it was not allowed to be. It is easy to be fooled. Connected in the lost. Nothing else. That was the solution. He also wanted to leave it. To turn back to her, because what if she would awake. To be there. He could not do more. Carefully, he sat down next to her, accepting her, in the warmth of her skin. At last she had come to rest, though not entirely voluntarily.

When she opened her eyes, he was still sitting next to her. He gave her time to orient herself, to find her way around, because he knew when it was not necessary to say something. Step by step she found herself back in the present and in the place and to him, as she raised her hand and ran her fingers gently over his face. Almost a breath. And a reassurance. An assurance. From the possibility a certainty arose, which they did not pronounce because it was too obvious. They had arrived, or at least it was something like. For this moment. For this here. And the afternoon started, went over into the evening, into a night and another awakening. They had not noticed. It did not matter. Only time that passed. And in the midst of the offense, having arrived in togetherness. Even if it was just something like that. It was enough.