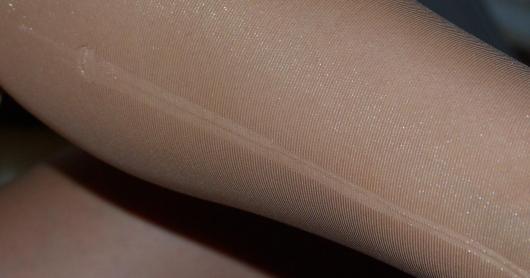 Martinique and Christian had an experience that was theirs, all alone. They would keep it to themselves. Everything else would be betrayal. Moreover, it would break so much. Like a delicate little plant, which had to be protected from rough access and matured in secret. Until it was strong enough. Strong enough for what?

It was already dawn when she opened the door to her apartment and closed again behind her. How many doors can be opened and closed within a few hours? How many accesses are made possible and escape. Used or unused. Only then did she feel the tiredness. Carelessly she threw her bag and coat into a corner, slipped out of her shoes and pulled the dress over her head. When she started to open the holders at the stockings, she finally noticed that one of a run was disgraced. The right one. But only for the sake of completeness. Abruptly, she paused in the movement and looked at the running stitch that ran from the top of the stocking to the knee. Still, because as soon as she moved her leg a little, it kept walking, always a few inches further, until it reached the seam that lay around her toes.
„It’s like this emotional poisoning,“ she thought suddenly, as if she wanted to say afterwards that she understood what she meant, „It’s like with this stocking, it’s just a tiny hole this hole penetrates something and it continues until everything is soaked in. And then the stocking is broken, it cannot be repaired, the poisoning contaminates the body, it can be repaired with good will, but that’s hard.“ So she took off her stocking and threw it away. Then it occurred to her that it was the last pair of this kind. So, she threw the second one away as well. It was not just justified for practical reasons. Even the spreading nostalgia was satisfied. Off to the trash and everything was over and good. Was that it?

„What if these pathogens entering the tissue through the little hole in the sock, yielding to the pressure that penetrate me, through the opening I allow for you, if they do not poison but heal?“ she suddenly asked herself. Getting involved emotionally can be painful, she knew it all too well. But she had also experienced that it could heal, that it could dispel mistrust and isolation. Caught, held, warmed and protected. That too could be it. The pathogens that dissolve the encrusted and wash away. It may be that or that. You never know, not in advance, not if you prevent it from getting involved. But if you do not get involved, you cannot know it. What keeps one from wanting to know if it’s one way or another is the fact that it’s not as easy to dispose of and replace as a tattered stocking.

„Stockings can also stay healthy,“ she thought further, and probably perfectly consistent. Of course, not forever, but nothing in the world is designed to last forever. Even before the size of the claim you had to surrender, but you only tend to ultimately demand the utmost, if you want to distract from the fact that you do not even want to get involved in the living. An extremely clever excuse to settle for lifelessness. Therefore, Martinique brought the broken stocking, and the intact and hung them to the wall. As a reminder. As a sign. As a possibility. As a certainty.

„It’s not good to lose yourself,“ she said, without any further introduction, having faced Christian again a short time later, wearing an intact pair of stockings, „but it’s not good not to lose yourself.“ He looked at her without a word. A little irritated. A little surprised. But definitely sure that he could not escape this situation just like that. Maybe not. Anyway, he steered her into the house. At least that did not have to be discussed on the lane, if she had been there yet.