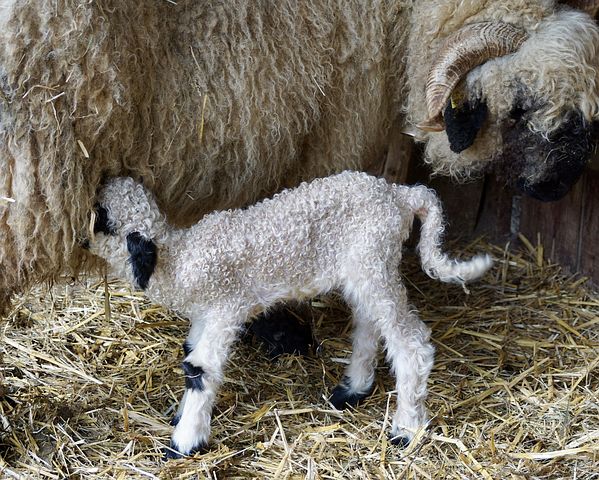 A new day was shrouded in the reassurance that normality brings with it. Smiling, Maria took care of the puppies, who became more and more curious. Did they forget their mother? But what should they do? Should they mourn and forget about their own life? What would life be if we neglected it just because we know there is death? They went ahead, the four rascals. And it was fine like that.

„It’s wonderful to see how they develop,“ said Magdalena, watching from her seat next to the fireplace thoughtfully, „And there would be dogs in the yard again.“
„I was surprised that there is none,“ said Maria now, because in her eyes dog and farm belonged unquestionably together.
„We had one until a few years ago. He left us shortly before my husband, and I no longer had the courage to take another. What would have become of him, if I would go too?“, said the grand-aunt, „so much life. No, it would have been too selfish. But the four here, they have almost literally snowed us into the house.“ Even if it was accompanied with a smile, so was the unspoken question in the room, which would probably be from the puppy, when Maria and Uwe left again. What would become of Mary and Uwe if they left again?
„How long are the little ones with us now?“ Magdalena suddenly asked.
„One week,“ said Maria promptly.
„I do not know, but I have a strange feeling about the Nazl,“ Magdalena continued.
„Who is the Nazl?“ asked Maria, who heard the name for the first time.
„That’s the hermit the dogs probably came from,“ Magdalena explained. „He lives alone up there in the woods. It’s true that we had our differences regarding the animals, but in the end he treated them so well that he certainly would not have offended or starved. Of course, people talk a lot about him because he retired so completely into the forest. That’s suspect. He is not so cranky as some do. Anyway, it would calm me down if you could drive to him and see what’s going on. And if everything is alright, then you will look it up to an old woman. “
„Of course,“ Maria agreed spontaneously, and five minutes later, she sat in the passenger seat next to Uwe, while driving the car into the forest.

In fact, they found the hut as Magdalena had described to them. Old and abandoned it seemed, but everything seemed to be intact, and yet something was not right. Did not Magdalena betray her feeling?
„Do you notice something?“, Maria asked as she approached.
„What should I notice?“, replied Uwe, but then he looked again, „There is no smoke from the fireplace.“
„Right,“ Maria confirmed, „and that means there is no heating in the house. But who does not heat in the cold? “
The next thing they noticed was the screams of the animals that came out of the barn. They were wistful, suffering screams. Immediately they followed the sound. Quickly they opened the latch and found a frightening picture. Two cows tied up in it. Apparently their bunks had not been cleaned for a long time. There was no fresh water, no clean straw, much less hay, but there was a trail of blood right through the stable. They followed this trail, which ended with two dead sheep.
„The fox,“ Maria exclaimed involuntarily, „and they had no chance to escape.“
„Well wait, I’ll tell him something,“ said Uwe resolutely, and was about to trudge to the hut when he felt held by Maria.
„Wait a minute,“ she told him, „Do you hear that?“
A faint whimpering came from a corner, so soft that it was drowned out by the cows‘ mooing, but it was there, unmistakable. Was not there a rustling too? And then they found it, a lamb.

„And she wrapped it in diapers and put it in a crib,“ Maria said quietly, picking up the small, trembling bundle of life.
„That can only be a few days old,“ Uwe decided, after looking at it, „maybe three or four. The mother managed to hide it. Hard to believe if I had not seen that. “
„We have to take it with us,“ Maria explained.
„Of course,“ said Uwe, who nevertheless set about storming into the hut, „When I first button this old donkey. Hermit or not. That’s animal cruelty. “
Maria, the trembling lamb in her arms, followed Uwe on the foot, entered the hut, whose front door was ajar. The cabin seemed to consist only of this one room and a chamber. There was a leaden silence in this room, which was freezing cold. The windows were covered with blankets, so that the daylight could not penetrate and made the room appear even gloomier. Maria tore down one of the blankets and wrapped her around the sheep. They found the room spartan but clean. Then finally they discovered a human. He lay beside the bench and did not move. Uwe knelt beside him.
„Totally over-cooled,“ he stated, „But he lives.“
A few minutes later they were back in the hut with the Nazl and the lamb. The doctor, who was called immediately, diagnosed an infarct.
„Apparently he fell and stung his head,“ Dr. Hübner, „What a constitution. Many others would not have survived that. Good that you have looked after him. It was still last minute. He would not have survived another night. “

While the Nazi was slowly recovering under the stern gaze of Magdalena and faithfully taking care of her, Maria and Uwe managed to get the two cows down from the hermit hut to their stable, and the little lamb was pushed into a sheep that had a young one herself.
„I am so happy that she accepted the little one,“ Maria told Uwe as they watched the two lambs drink.
„It’s not an easy job and it always calls for you,“ said Uwe, who had put his arm around Maria, which she liked to put up with, „but it’s also a job where you reap the rewards right away see how the animals develop and the fruits thrive in the field. Not like many others.“
„Now I’ve only been here for a few days,“ Maria said thoughtfully. „And yet it seems to me that I have always been here, as if I had just made a detour to another world, which is not really mine. I feel more at home here than anywhere else I have ever been. “

The life that used to be theirs seemed to move farther and farther away, as if it had nothing to do with them, with Maria and Uwe, as if they had only had a dream from which they had now awakened. But there was still this internship that was supposed to be going to Maria, and there were the obligations that Uwes awaited, who had stopped and left everything. Just because.

As the sun dipped its horizon into soft red as it went down, Maria and Uwe knew that they had to decide, because the weaving boat does not stop and weaves relentlessly on the web image of life. And it was the evening of the sixteenth of Advent.