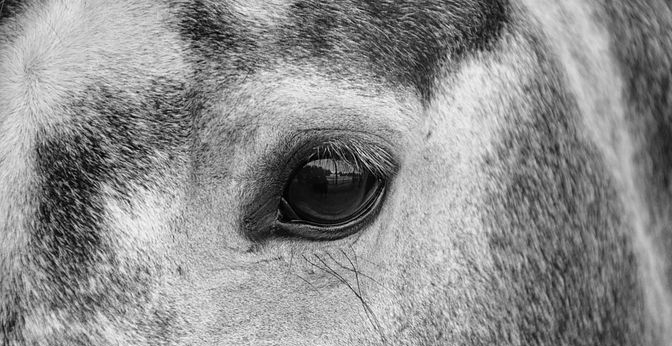 And it was another morning. Magdalena sat by the stove, in the place where her husband had fallen asleep to never wake up again. It seemed as if she wanted to follow him, but she was not ready yet. Maria struggled against appearances by doing what she had to do. By now she had picked it up. The everyday, the work every day. She took care of the animals and took care of the stable, took care of the household, but something had changed, something in her approach to this work. At first she had always tried to do everything as fast as possible, according to the instructions that had been drummed into her for many years. Everything has to be done as efficiently as possible. But now she paused, looked out of the window or stroked one of the animals.

Martin, the little gray donkey, had meanwhile made it his business to approach her and poke her with his mouth. When it first happened, Maria did not know what to do with it, more than that, she backed away, having learned not to speak with the animals, but gradually she understood, because then she put her hands on his neck and he stroked it, when she scratched him between his ears, then he kept very still, so that he simply enjoyed this affection and let it happen, then turn around again and join the others. Simple, plain request and acceptance. How often do we encounter simple, plain requests among people that we do not understand, despite all the words. There was no need for words here, if only one got involved. Maybe it was between people even because of all the words. All the many words that often obscured and veiled an understanding rather than revealed and made it visible. It was the first time Maria had thought she was losing time. Finally, she had to do her job. A contradiction to efficiency. But it’s not just about efficiency, but about her life, which she no longer wanted to be guided by rigid axioms, but fill with liveliness.

And when it stopped, it was a caring and recognizing that there is something else that matters. It may be that she needed a few minutes longer this way, but in the affair she learned to recognize the needs of the animals. These were small signs you only saw when you really got involved. It could be an attitude, the way of putting on the ears, the way of moving, standing. To see, Maria realized, it is not enough just to open your eyes, but you have to look and let what you see penetrate. Perhaps this is the deep meaning of the sentence that Antoine de Saint-Exupéry tells through his Little Prince, that you only see well with your heart. Maria had not understood what that was supposed to be, especially when she saw someone fall into a deep sigh when that sentence fell. „Such a nonsense,“ she thought then regularly, „For all artistic freedom, one does not see with the heart, because the heart has no eyes. Besides, it’s nothing more than an organ that does its job.“ But now Maria began to understand.

Seeing with the eyes is one side, the basic requirement, but what we get from what we see, what we absorb and really understand, that is the heart that touches us, that concerns us. That’s the true seeing. And the next step is the consequence that we draw from it. The beggar, whom Maria has so well circled so far, she has seen him, but she skillfully and deliberately averted her eyes because she did not want him to touch her, because she was embarrassed by his poverty. He was in his world and she in hers, with no points of contact. But she was not only not touched by the beggar, but by no one. There was no human being whom she brought to her. Not even Uwe, as she realized at that moment. Was it more than show that she delivered for the others? What did she know about him, except what she proudly told? His education, his ambitions, his ambition, as if she were telling of herself as a reflection. Nothing but abuse of a human to reflect in him. She did not know where he came from.

From time to time, when he was not completely in control, she spotted a dialect in his own language, which she could not assign. Every time she did, she’d acted as if she had not heard, ignored it, and put him at his source. She realized that she felt embarrassed, that he had something of an origin. Probably not the fact in itself, because after all, we all have an origin, but what if it was one that you disliked, one as she had and that she thought buried, far away from the rubble of a past, a past which she had demolished, collapsed, but there was no way to get rid of her completely. But now, now she wanted to know. She wanted to ask him.

„Who are you?“, Maria asked, standing in the middle of the stable, barking Martin between the ears. The donkey who turned one ear to the other donkeys, the other to Mary, as if he were listening with interest.

„I had a dream,“ Maria began to narrate as she sat down to dinner with her grand-aunt, „I had a dream helping the animals. The old, the sick, the wounded. Everyone came to me or was brought to me, the abandoned, the outcast, the lost, and I took them all in. “
„That’s what you wanted then,“ Magdalena said simply.
„In what time?“, asked Maria irritated, because she had had this dream last night.
„Back in the summer when you were with us,“ her grand-aunt replied, „you were with Toni in the woods, as so often, you rescued a fox from a trap, brought it home and nursed it healthy. That’s what you said, that’s what you want to do later, save animals. “
„I remember,“ Maria explained after a moment’s thought, „It was a dream that brought me back to the past. How could I forget that? “
„Because priorities are changing,“ Magdalena replied, „because you seem to have taken a different path.“
„And I completely forgot it,“ said Maria, „It was so nice to experience how the fox gradually became healthy and one day just ran into the woods, back to his world, to his peers, even if I said goodbye was difficult. Part of me wanted him to stay, but another one knew he could only be happy out there, happy after fox style. Just as we have to let people go, as much as we wish them to stay. “
„Saying goodbye and staying in love, that’s the secret,“ Magdalena concluded, and as the room shrouded in darkness, illuminated by nothing but the flickering of the candles, the glow of fire from the chimney, while the Silence spread as warmly and tentatively as the living light, the four puppies cuddled up to them, and Mary knew that was part of what she had been looking for but could not find because she had been searching the wrong place , So she looked at her grand-aunt, and her vision was perception. So she looked at the puppies, and their vision was perception. And the perception was allowed to touch, the touch transforms. And it was also the beginning of a farewell, which she only suspected for the time being.

And the weaving boat, which added a new series to the web image of life, showed that the newly started path continued. And it was the evening of the twelfth of Advent.