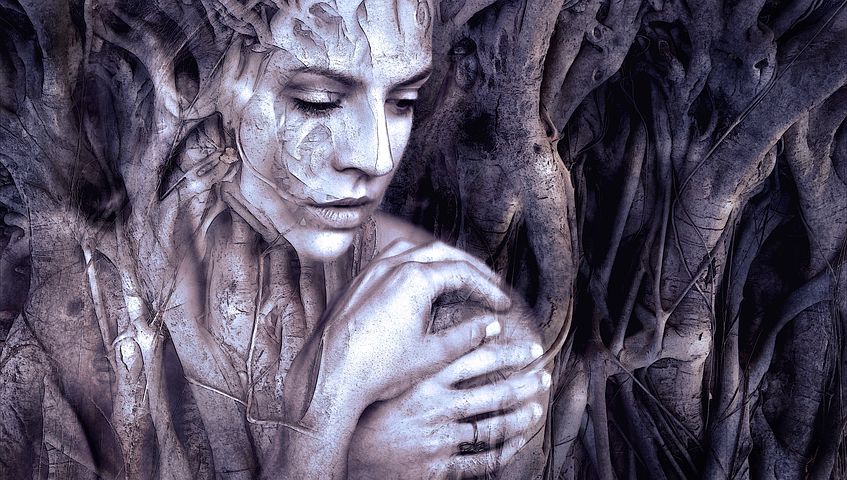 He lay there a bit, and watched her stroking him. Not that it would have been bad. It was simply not so provided. To be fondled, to be kissed. He had to fondle and kiss. This was evident from the physical constellation alone. Men penetrate. Women be penetrated, for which they have nothing to do but leave it. Men conquer, storm. Women are conquered, stormed. On the male side all verbs to be used are active, on female passively. The happening must go out of the man and therefore he has to shape it while she accepts this. It is planned for nature.

And now she sat on him, just so, caressed and kissed him. Actually, he should. Women did not need that.
„Close your eyes, relax and stop thinking so much for God’s sake,“ she whispered to him in the ear. So he closed his eyes and relaxed as far as he could. He could have done worse, he thought, and then he let that happen. And had to experience how she took him out.

The pants and the socks had already had to believe it when she finally got to the point. Carefully she lifted his panties to give his mast room, to sit up, which he had done contrary to expectation, at whose head an imaginary flag seemed to be hoisted, on which „conquest“ stood. Either she did not see it, or she did not let her go astray, for when she turned the tip with her lips, the flag, even if it was only imaginary, was history. Then she opened her lips, caressed him with her tongue, before she let him go, until nothing could be seen to release him again, but only to sink him again. He also let this happen until she finally left off and he said that he had to come to the turn. But that was obviously only his opinion, because she had swiftly placed the glans between her other lips as fast as a bird, slowly settling on him, absorbing his phallus as far as possible. She paused briefly. To actually experience this one moment before she let her basin dance. Automatically, he followed her movements as his hands stretched around her hips.
„A stallion was a part of it,“ she whispered, between the clear expressions of increasing excitement.

And as if it were his starting signal, he hugged her, pulled her to him, to turn her back with a full swing.
„And a mare belonged,“ was his statement, since he was finally there, where he belonged, at the top and actively shaping the happenings. The finale belonged to him.

Satisfied as a cat, he rolled down beside her as she cuddled into his arm. Giving was his part. Not the other way around. Women who subjugated him, whom he assumed, subdued him. He knew that. Mothers give. He had been dependent on it, as a little boy. But then he realized that he was no longer that little boy. If he allowed himself to be given, not because he needed it, but because he let himself in. The decision to enter this, which he had not had as a boy, lay now in his hand. In spite of everything, he had decided to let himself be involved. And then he had taken it over again. Fluent, self-evident. He had remained free, even in acceptance. And to blame for everything were these silky-smooth stockings, which were all she still wore.