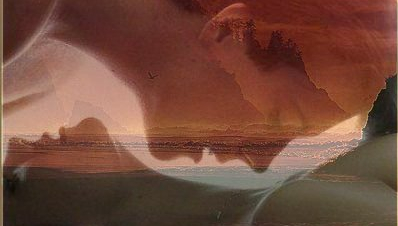 With her lips she closed mine, and the closing was at the same time also an opening. Sweet they tasted, after vanilla and almond, but above all after her. Soft, they felt creamy, rounded. Had I ever noticed this when I looked at her? It was as if I saw her lips for the first time when I had closed my eyes and saw them with mine. With her tongue, she shared this, and sought mine to discover, to explore. A kiss, just a kiss. Actually.

There were so many in my life, and yet it was quite different from any other I had received and given, for it was free from conquest. On the contrary, it was like a dance, a cradle, and a robe, which continued in motion, into a hug, in the clinging together. Through the thin fabric of her dress I felt her warm, supple body on mine, the soft, cuddly breasts, the slight curvature of her belly, which ran into the little hill between her legs, which pointed like an arrow to her center, the firm thighs. And it seemed to me that I felt myself, within myself, and outside of me, while at the same time I was her out-of-sight.

Suddenly she broke away from me, took a step back, and looked at me. The feeling on the skin, even through the fabric, was enchanting, even through the skin, as she pulled the straps from the shoulders, and the dress slid to the floor. My first impulse demanded to look away, but she took me by the hands and consciously directed my gaze at her body.

Is there anything more aesthetic around the world than a female body?, it shot through my head.

It had been felt in my head, and in my body, like a sketch that was now filled with colors. I would have liked to stand forever, only to be lost in sight, but she did not allow it, because with her nimble fingers, she made sure that I was also naked in front of her. I was aware of it, and wanted to turn away from it. It was an impulse, as automatic as the next breath, but she kept my hands in hers and looked at me.

Her gaze spoke to me, benevolence and acceptance and security. At last I was able to take it without questioning, to let me see, to look at me, and what I saw was like me, and was not myself, was so familiar and so unknown to me at the same time. It confused and calmed me to the same extent. But again she took me by the hands and led me. I gladly gave myself to her guidance.

Soft was her bed on which she put me, soft was the skin of her body, which was nestled against me. Our mouths merged in the kiss, and I began to drive forward. From one moment to the next, I forgot to think, but left me to my intuition. Her body pressed more emphatically to mine. I felt her erect nipples on mine and a wave of excitement ran through me, even more as her leg slipped between my legs and I got her thigh between my lips between my legs, whereupon I did in return. The same thing. Basins that move, in harmony, symmetrical. Lips that filled with blood, and the clitoris, her and mine, swelling up to the stimulated care as the source overflowed, hers, mine, the thighs bedewed, her, mine. Our movements became ever more intense and emphatic. And I felt the pleasure that was hers, was mine, which spoke in the movements and in the kiss and in the urgent togetherness.

Irritated, I looked at her as she moved away a little from me, but as she placed her hand between my lips instead of her thigh, she stroked it softly, then plunged a finger into my vagina while her thumb continued to flatter my clitoris, Then I knew it was good and I did the same. My hand went on a journey of discovery, for which I had no name, but which I would soon recover.