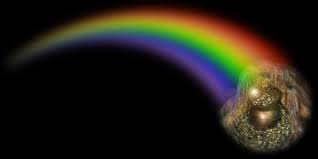 It had rained, all day it had rained. Gently the drops knocked on my windows and played a cradle. It had been a windless day. Therefore, the drops fell gently and warily. Sometimes they sound like whips, and sometimes just like a warm melody, and just as the sun went down the rain stopped and a beautiful rainbow rose on the horizon.
„Do you know the story of the pot of gold, which can be found at the end of the rainbow?“ I asked, absorbed in the sight of the colorful bow.
„Sure, who does not know them?“ You answered pragmatically.
„Anyway. We’ll get the pot now, I’ve just decided, „I said, taking my hand to continue with you, but you were against it.
„Such a nonsense! You know you can not reach the end of the rainbow,“ you said, shaking your head.
„Who says that? Have you already tried it?“ I persisted.
„I do not need to try that. I know it’s because it’s just a reflection,“ you said, „And I still have a lot to do. “
„Sure, you’re back at work and I can see where I can stay. But today I do not let me feed up so easily, you come with me. The work is not a reflection. Or maybe yes? Maybe it’s gone when we get back,“ I explained, as serious as I could possibly.
„So nice,“ you gave a sigh, „then we’ll stop. You do not give any peace before.“
„Definitely not,“ I said, laughing and taking you by the hand. This time you did not mind. We went out, around the lake, always towards the rainbow. The air was clear and mild. I consciously entered it, sniffed into the evening, which offered us warm and gentle. The water in the lake was quiet, and only a few drops, which were still lost, rippled the surface. A few animals were shy from the forest to browse. Spring had already begun, and snowdrops and primroses flourished along the edge of the road. Everything was set for becoming, becoming and growing, flowering and flourishing. The grass stood in the lush green and the willow kitties showed their splendor.
„A beautiful name, willow kitten, like little kittens nestling against a branch,“ I said, smiling as I let my fingers spread over the little hairs. We chatted, you and I, as we haven’t done for a long time, discovered new things around us and in us, while we were always going towards the rainbow.
But then it happened, the inevitable. The sun went down and with it the rainbow. We had not noticed it, but at last you stopped me and told me about it.
„The rainbow is gone,“ you thought surprised.
„I know,“ I said succinctly.
„But where are we going now? Where are we going to find the pot of gold?“ You asked, surprised, „Why did we leave? Or not?“
„Yes, we went off, and we’ve found it long ago, „I said seriously.
„Do you know what I do not know?“ You asked irritated.
„Apparently. But have not you noticed? We have discovered the world, we have laughed and talked, we have felt and in the world. This is the treasure, the pot of gold we have found,“ I told you.
„And it was so close,“ you said thoughtfully, „Come, we’ll make tea and enjoy it for a while.“