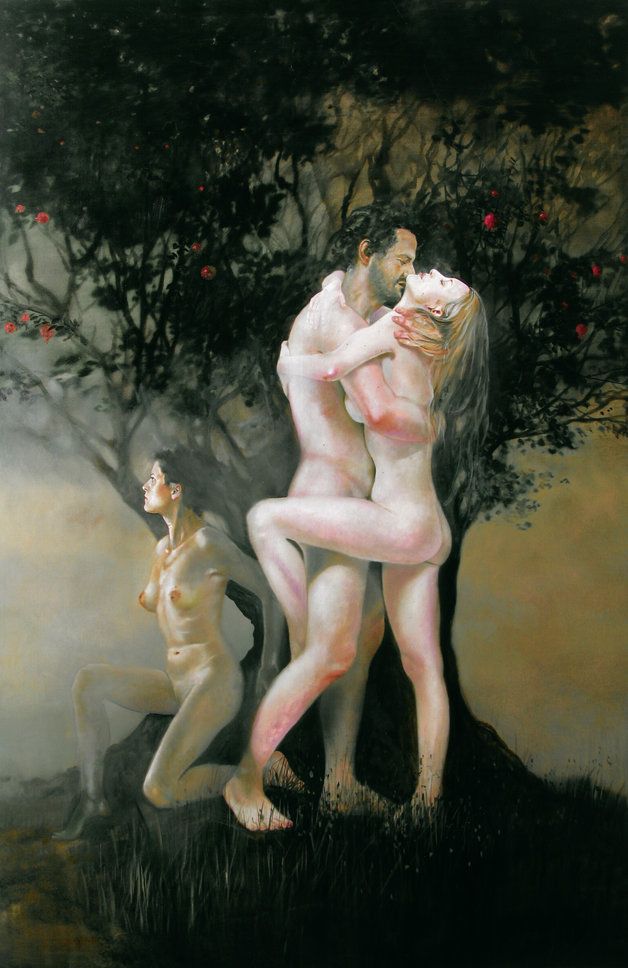 „Tell us how you are, with this ulcer, with this sloppy thing. How did it happen?”, they asked worried.

„Well, it was one day, just like that,“ Adam replied, trying to look as sad and suffering as possible, and in fact it had the desired effect. „You should rest. We’ll take care of you, „Eva said anxiously. Lilith watched the hustle and bustle. Perhaps she was suspicious.

„Come on, and help me,“ Eva finally asked, „He just came into the world and then drawn the same way.“ That also seemed to convince Lilith and she supported the girlfriend.

The world continued to turn, only Gaya had become aware, for with this new being, something had been drawn into the world which had not previously existed. It was still not to be named, for he lay peacefully under a tree, and slept, but it had entered with him, something strange. In fact, the women had moved away from each other. They were worried and the care was something outside of them, outside of the comprehensive view of the world. However much they tried, it could not be integrated, remained alien.

A few days later, at the time of sunrise, Lilith went to Adam, for she was always the first. So also this morning. She came to see if he was better again, but what she had to discover was her worst fears. Not only that this ulcer had not grown smaller, on the contrary, it had grown, stretched its icky head up. And on the pretext that it might be a possibility to help him, Adam took the first vaginal intercourse. Well, the ulcer had diminished afterwards, but Lilith was no longer the same. During the trial of the healing, Adam groaned incessantly and that made Lilith afraid, but he did not want to stop, and he left his traces in her as if he had taken possession of her.

The next morning, Eva found him as well, and with her, too, he succeeded in satisfying him, and at the climax, when there was no more blood in his head, he stretched out his arm and reached for an apple, whom he handed over to Eve. He had given her a present, a gift that glowed and nourished golden. He would care for her, and she turned away from Lilith, who had never given her such a gift. They had always done everything together, but she had never given anything to her.

How quickly it was forgotten that this together also contained the sharing, so there was no having to become a confidant. But this apple was a gift that belonged to her, to her alone. Having had entered the world and thinking in ownership structures. And she set the present similar with his affection, and put her in love as something you could possess. Thus, the apple was the beginning of discord, the end of paradisiacal harmony and the snake was nothing more than the lousy ulcer that the man carries.

In order to ensure the reproduction, the guilt was pushed to the snake, and the little girls suggested that their natural disgust was actually a secret envy. And because the little girls were already ashamed because of their evil sister eve, who was to blame for everything, they also somehow believed in this fairy tale.

2 Gedanken zu “The whole truth: From the creation of human (2)”