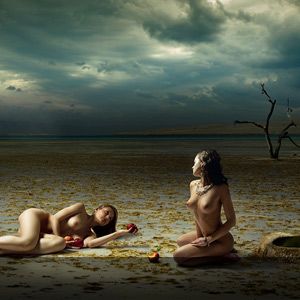 In the beginning of time, it was, and Gaya, the mother of all life, rejoiced over the wisdom and the turmoil of her, over all the wonderful things that delighted her countenance. Never had she been so beautiful and attractive as in this rising joy over all the breathing, living life. And Uranus, the heaven, to whom this was not concealed, burned with passion, so that he would bow down, envelop her completely, to unite with her, to lose herself in a wonderful and loving coexistence. This union, which was neither purposive nor purposeful, but contained in itself a self-resting and satisfying one, was the most graceful being ever to be seen.

It was so graceful and lovely that the animal world gathered in astonishment, and whether that sweetness and warmth that radiated the essence became tame and trusting. Even the wildest creature, be it boar, wolf or bear, all lay at its feet and felt well. There lay the lamb beside the wolf and the lion beside the gazelle, and none had to fear to take damage. But this harmony and paradisiacal harmony was founded not only in the grace and warmth of this being, but in his loving affection, for the essence was twofold, for only in the duality is the possibility possible.

Lilith and Eve were the first two men, the pair of primates, the one dark, the other light-skinned, one calm, the other lively, they miraculously supplemented themselves into a unity. The gaze was intertwined, without excluding the surrounding, but all that they surrounded with kindness was taken into the familiarity of the two. Their love was comprehensive and not only narcissistically closed. Everything had a place in them, without losing themselves or becoming too much. Love became, and Lilith and Eve were the embodiment of this love, which was sufficient in the experience of its own self, in the gift of its own self. Pure and perfect, they were in their natural nakedness. So they took their hands and enjoyed the gifts of their great mother Gaya, and by themselves.

With benevolence and tenderness, Gaya also saw this wonderful creature that inhabited her. For these two she blossomed again, flourished as beautifully, colorfully and richly as never before. And she had no more eyes for Uranus, withdrew his attention. Then the anger in him rose, so to be reset so ignored. And he decided to punish Gaya and her magic. Thus he shed his seed, from self-referred, self-centered action over Gaya, and from it came a being, alone, centered in itself. And he called this being Adam.

Astonished, Lilith and Eva spotted him. He looked a bit like themselves but there was something that made them worried. They felt the animals dwindle in front of him, scrambling anxiously behind the women as they sat down, slowly spreading a disharmony to them, the disharmony of the separated and the discordant, the disharmony of the in-himself centered, and then they discovered something else, and that gave them a cold shudder over their back, something that aroused their compassion.

„You poor,“ they exclaimed, „Is not that horrible? Does not that hurt?“

Adam looked irritated and did not know what the two wanted to go, for he did not feel poor, on the contrary, bursting with strength and force, but he pursued their gaze. Already he wanted to say that everything was all right, but he could not help himself. Perhaps it would be a good thing for him to change.

At the beginning of the man’s story stood the deception.

2 Gedanken zu “The whole truth: From the creation of human (1)”