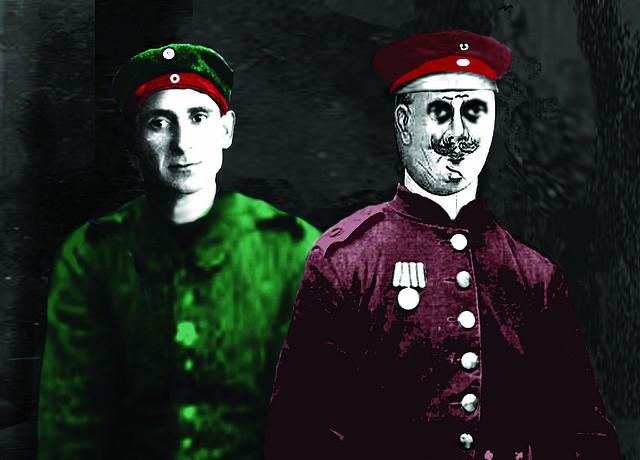 I sit on my footbridge and the moon is reflected in the water. A small, delicate figure approaches and remains at some distance. She is trembling, as if she were afraid, looks tired and bent. Yet she took the path. I get up and go to meet her. Her skin is dark and her black eyes make her look strange.

„Hello! I’m glad you’re there!“, I try to cheer her up. She smiles at me. She responds, or I rather accept that she answers, for I do not understand her language. So I take her by the hand and lead her to the place where I sat before, to the place from where I admired the moon. We sit down and I point to the moon and say moon. She tells moon about her language. I repeat the word to impress upon it. Then I point to myself and say my name. She does the same thing and calls me her name. I repeat it to impress upon it. This is how we deal with many things around us, then continue with small sentences, and this smile is always connecting us and encouraging us. And these little touches that signal the approaching will.

So I learn from her like her from me. I learn that everything has a name in her language as it learns a new one in my language. We are mutual, teaching and learning. But there are more than words we learn. We are learning a new world. We reveal each other. That is how it can be. It should be so. To go the way together, where we were once separated in Babylon.

But how often has it happened that those who have power negated and thus eradicated the language, and thus the reality of those who subjugated it? How often did it happen that language was abused as a power instrument to make those who had no choice? How often did the rich escape into a language that they only understood together to make the social divide all the more clear? How many Woyzecks live among us because we forbid them the word and cut off their feelings, so that we might wonder when they murdered her Mary? Why are we wondering that speechlessness leads to violence, where we nurtured and caused this speechlessness? How often does it happen that we are indignant at what we have caused ourselves?

Yet it is a fact of self-expansion, when I learn something new, when you allow me to see the world through your eyes again. So exciting and enriching when I learn your history, your attitudes to life and to each other in your words. What should I be afraid of? Neither is better nor worse, but simply different. Why is it so difficult to pretend to be open, approach you open-hearted and open-eyed? Am I still standing on such shaky legs that I must be afraid, you have shaken my world, let it even collapse? And if it were so, then should not it also collapse? Or would not it be better for us to bring our worlds closer together and to flow through each other and to expand them?

At the end of this night, I can say good-bye to you in your own language, and you can get away with me.