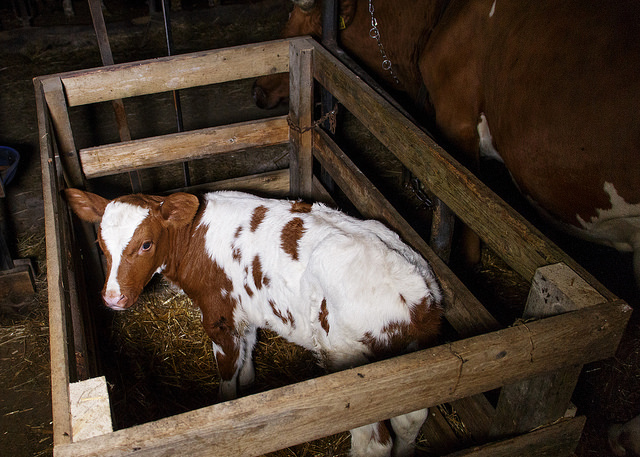 Whoever says that he has nothing to do with animal rights, because there is so much suffering in the world that affects people and one must first strive for human rights and their enforcement, commits a straightforward misunderstanding. Because human rights and animal rights and their implementation require that one has respect and veneration for life. Who tortures animals does not stop even in front of humans. Whoever glances at the sight of an animal only the Euro signs in the eyes, makes it also with humans. This is why it is high time to speak neither of human nor of animal rights, but of the right to live. One of these fundamental rights is that every living being has the liberty to unfold freely in its surroundings, according to its nature, in the social association which is typical of it. This alone shows how fully human rights depend on animal rights.

Cows live in herds. Usually. Cow mothers have a gestation period of about nine months, like humans, and then suckle for eight to ten months with their milk, which is adapted from the composition to the needs of the cow baby, and in humans cancer, osteoporosis, etc.. provokes. The offspring are introduced into the social association and are growing up in it. During the period of milk production, the mother’s body is subjected to enormous amounts, so that she loses weight even when she is given the best food. This would not be further in nature, since she also knows a period of recovery.

In modern industry, which aims to get out of the living organism as much as possible in as short a time as possible, the suckling cow is condemned to produce a calf every year, which is immediately removed from it. The separation is agonizing for mother and child. Then the mother is pumped on high performance milk. The performance she provides would be roughly comparable to that of a person who runs a marathon every day. Therefore the mother animals are leached within a few years and are only suitable for the butcher.

In order to be able to generate this performance, the animals must be fed with energy. The cultivation areas in Europe have long since ceased to cover the feed requirements of the beef and milk industry. Therefore it has to be imported. Thus, farmers in South America are expelled from their land, from which they could live until then to incorporate the fields into huge monocultures, while the endogenous peasants now have to make their mark as day laborers. This means that they are denied the right to their own land, and thus their right to self-determination. Human rights are being trampled to breed basic foodstuffs in Europe and the USA by animals that convert 5% of them into human eatable meat.

Human rights require animal rights because the type of industrial meat and milk production now accounts for at least 50% of CO2 emissions. In addition there is the poisoning by the excess of waste products of the animals and the destruction of fertile farmland by the use of pesticides. Apart from the fact that many people are given to death by starvation because they are deprived of basic food to feed the animals in the first world in order to enable people in these regions to eat even fatter.