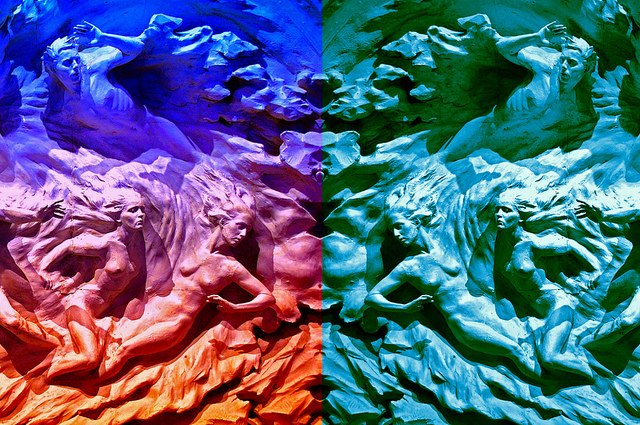 Amongst people, surrounded, encircled, surforced, fenced, distrustful, anxiously encircled, depending on the temperament, yet so much expanse, this forced proximity in the tram, waiting room, snake, which is a ditch, silhouetted between me and the surrounding, immoderate, silenced, looking at the ground or into indeterminacy, insignificance.

And in the midst of this human, corporeal accumulation of insubordination there is an irritation. Hardly noticeable, almost a breath that I could shake off, pretend that it had not happened. Ignorance of this delicate, strikingly delicate irritation. Ignorance against the butterfly wing of fate. Ignorance of a call which, despite its delicacy and apparent indeterminateness, means to me with all clarity. Speak to me. Me asks. And I lift my eyes from indeterminateness, smell the sweet scent of wanting and being wanted. And in lifting the gaze, it creeps along the ground and follows the section where the trench closes, while the others remain. A path, sparkling, fluorinating in the midst of social unity, is evident, and at the end of the path, which is followed by my gaze, in order to approach thee, guided by the straightening of the trenches, to thee, where my gaze Is lifted up, raised to you, to your eyes.

And your eyes have gone the same way, stranded as shipwrecked and yet have arrived. Do we know? You and me? Whether we are aware of the significance, the seriousness, the being at the moment, and the grasping of the becoming that arises from it? Are we conscious of our self, and of all that we bring into this view, which can fill up the trenches, as if it had never existed?

We are not. We no longer share, nor can we, at the end of the straightening, have any categories, only the specific, the unique, the spoken, the found, the saved, the permitting. Everything else sinks in the trenches as we approach each other. I do not want to know what you have to show, to all those to whom the world attaches so much value, to status or social position or rank or prestige or success or possession.

In this view, we stand naked and merely in front of each other, as unquestionably as it should be. Naked and bare, in paradise innocence. We enter into the dialogue, which is made possible by the trench straightening. I do not want to know anything about what makes you comparable, of all that could relate to you and thus relativize you from the beginning and the just-born possibility of dialogue, immersion in the flow of words, of the back and forth of the say, the cycle of self-talk, from the very first moment, caves, and forces them to percolate in the desolation.

What remains if the insignificances of having, which not only cannot do justice to you, but mock you for the degrading sirenly screaming. We are worthy of each other, being nothing but ourselves, expecting nothing, declaring nothing, annunciating nothing, proclaiming nothing, and losing the words of reciprocity in the openness of the water, without losing us, but in the view of the trench by becoming us.

The entry into the dialogue, in freedom and truthfulness, the immersion in the flow of words that surrounds us, happens in the nobility of the first address, in acceptance and in the gift, in you.