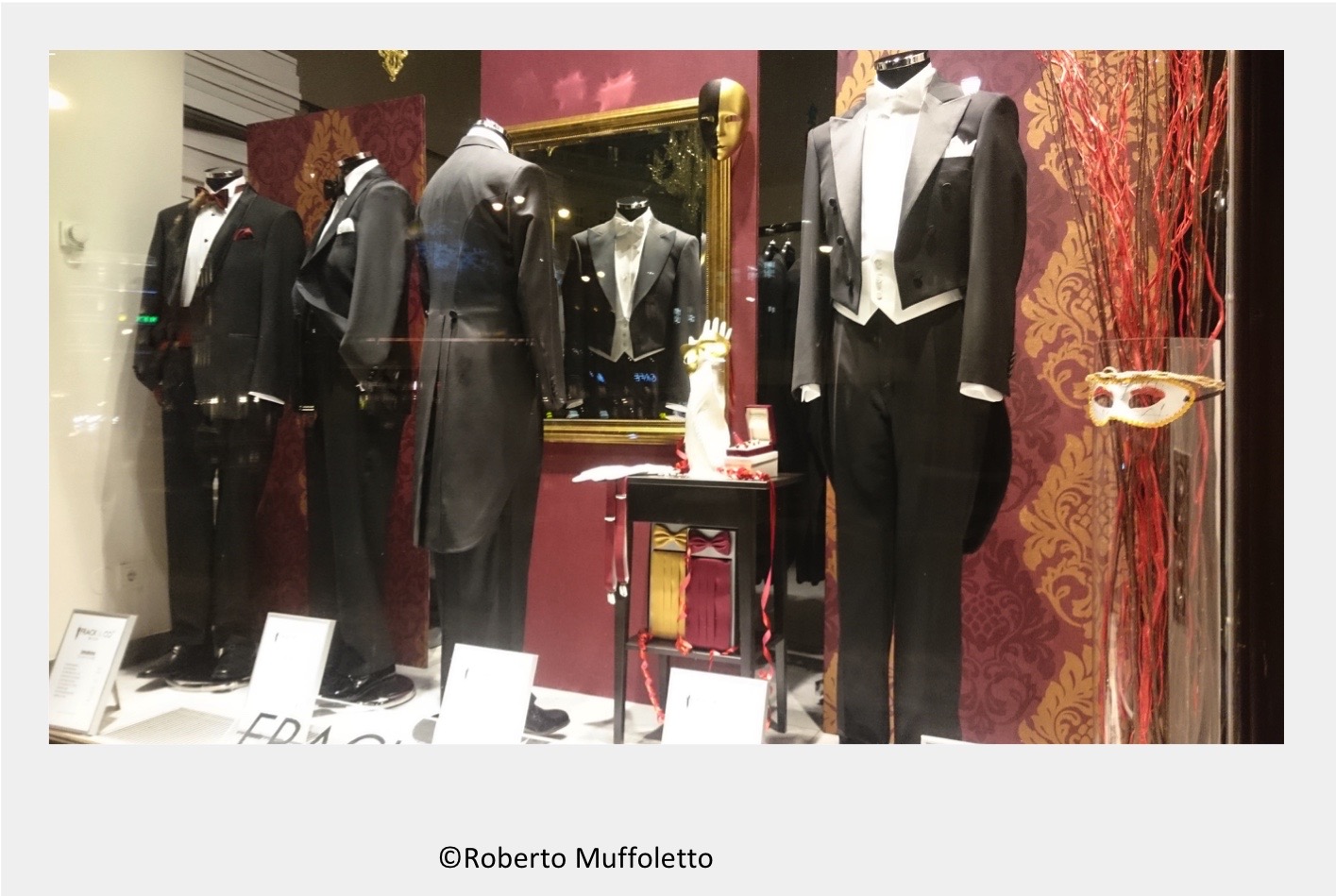 Returning is dangerous. Although one can never really return, for the one who was then was no longer one, and the one, who is now, was not at that time. The place remains the same. Maybe. As long as nothing changed, but when she returned to this place, she realized that little had changed. Many years had passed. The shops had changed. That was all. She was thinking as she paused. It was a display, one, like many others. She suddenly felt absorbed in a memory, absorbed into a time. It was not good, not at all good, but the pull was stronger than her will.

„Let’s go in there and try a tuxedo,“ she said in that time, her arm around the waist of the man she loved. At that time. Not now. She saw herself, that sassy, playful expression in her eyes, which at the same time bore so much longing and warmth. How many looks are able to bear. It was meant as a joke, actually.
„Why not?“ he replied, laughing, „And the mask, too, for the mask ball.“
„Absolutely!“ She replied, pressing a kiss on his mouth. How could it have been possible, so uncanny, undivided, unrestrained, unconditionally happy. She saw herself, self-forgetting, forgetting the world, so full of energy and joy of life. Was that really her? She saw it in her mind, but it seemed like a movie she had seen somewhere.

What had begun as a joke, ended in a reality. The purchase of the tuxedo and the togetherness. He looked so good in this tuxedo. She’d told him. So damn good, and the mask he was holding gave him something mysterious. So they went to the ball. Never before and never again had she felt so radiant.

And it was the next morning. The next morning, when she awoke, came inexorably. He hung the tuxedo in the box. He put the mask in a compartment above it. She saw his back. She was just about to get up, very quietly, that he should not notice it, for he did not yet know she was awake and watching him. She wanted to sneak up to him and cover him from behind. The hands were longing for the warmth of his skin. She was just about to have her hand on the edge of the blanket, ready to uncover it, to slip away from it as he turned around.

There was something in his expression that made her wince. It was a seemingly unmotivated reaction, but it was there. Did she still dream? Was she just imagining that? No, it was real. All the warmth and heartiness had disappeared from his eyes. The mask had been removed, but under the mask that they had bought together, there had been another. It was a game of wringing and capturing and destroying. Like a hunter on the game, who lures his victim and takes it to the track. Then he leaves it. An unspeakable pain passed through her body, which made her shrink back. At that moment, she knew that she was already historyt for him.

Slowly she got up and dressed. She wanted to go without a word. There was nothing more to say. He did not stop her. Already the latch in her hand, she turned around and looked at him. She wanted to tell him something else.

„You have laid a course, a long, nothing but death and desolation. It is your triumph, but ultimately you are a drunkard who can not stay. I’m sorry for you.“

He did not reply, because there was nothing to say. And as she now used her last powers to push the latch down and keep herself upright, she had to smile at herself. It was her pain that nearly tore her, while he was glad that everything had gone so well. Like a deer, who at the moment of the shot wanted his murderer to taste its meat.

It was a long time ago, but the pain was still there. One does not become wiser, only older. And the display was just a display.