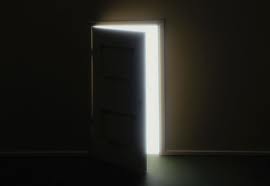 I sat there, still there, on the bed, leaning my back against the wall, still since that time, since you left, you sat there like a thief in the night, and you had also taken a lot of things with you.

Your gaze that surrounded and lifted me when I told you about the yesterday you were to me, about the today you were with me, and the morning of which I had hoped at that time that you would give me and in which you have left off abruptly.

Your hand that held me and strengthened me, who warmed me and consoled me, which gave me security, into which I could give myself and in which I felt safe.

Your thoughts, in which I knew at home, and those who extended me, who advanced me, to the limits of what is conceivable and beyond that which taught my dreams and hopes to fly.

Many things you have taken with you, and have thrown you as a thief in the night while I slept. But you left much to me, all that underlined your departure.

Your name, which you had pressed on my skin like a burning stove, over and over again in the same place, until it had burnt into me, through me.

Your words, which had been nestled in my head and now marched up like little soldiers, over whom I had no command, marched and declaimed their text, over and over again.

Your pictures that you gave to me, in that time of the togetherness, which you had injected into my blood like a virus that spread with every heart stroke in my body and infected it.

I wanted what you had taken, and I wanted to give you back what you had told me. And the silence was unbearable and I could not stand the noise. And the brightness ached and the darkness hurt me. And I did not stop the inactivity and the activity was disgusting to me. I did not want you to come back because I wanted you to be there. And I did not want you to be there because I wanted you to come back.

I was still sitting there on the bed, leaning back against the wall, looking out of the window. The days came and went. The nights awoke and slept. Everything went its course, untouched and untouchable. Everything was, as always, unaffected and inviolable. But me, you had touched me, and everywhere you touched me, the pain was undoubtedly. But me, you had touched me, and I held myself in touch. Just as I did not close the door you were going through, and walked away from me, did not lock me, in the event that you would return, for the moment when your path rounded and led you back to me, In the event that you desire entry.

And the streak of light that fell into the room through the doorway smirked at me and told me something about the hope that could not exist, and which still occupied more and more space within me, in spite of everything,  even in spite of you.