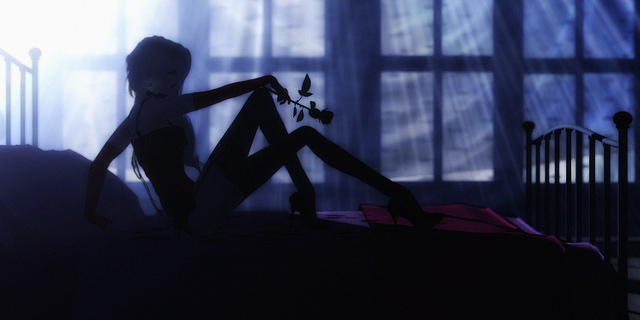 For a long time we had succeeded in maintaining the illusion, for a long time we had been seduced by the sweet scent of imagination. But on this day we were awakened not only in its novelty, but also in the disillusionment. We have not spoken about it, not a single word, but we have known it, and it has made our hearts heavy. We held each other by the hand, just to make sure that we were still together, but even if we did not name it, we were aware that it was a walk of farewell. Even though we did not want to believe it, we could not stop by. The illusion had finally and irrevocably died, and the sweet fragrance of the imagination had been absorbed by the bitter scent of reality.

Like this, this day had also passed, and the night was broken. I was sitting upright on the bed, my back against the wall, looking out of the window, into a star-shaped night, which was no longer ours, but only yours and mine, just as this day of farewell was no longer ours, but had already splintered into yours and mine. I thought that we had tried, with all the strength we could muster, but it was futile. We stopped where there was nothing left to hold. We hoped where there was nothing to hope for. We asked where there was no answer. And yet, up to this point, we had managed to maintain the illusion, until we had been let into the sweet fragrance of imagination.

You have long since fallen asleep, with your head resting in my lap while I leaned my back against the wall, lost my eyes in the night and lost my hand in your hair, and stayed awake for a long time. A few hours of unintentional activity of farewell. Perhaps everything would have been easier, the farewell and recognition of the now separate ways, all easier to bear, the pain and the isolation, if we had not maintained this illusion so long, if we were not so long from the sweet scent of the imagination. But who can say a stop when life lures to that illusion of happiness and joy. Who would not have let himself be seduced, to the last drop, even We?

When I awake again, you were no longer there, your head was no longer in my lap, and my hand reached into the void. Since then is a half-pain-free a good experience.